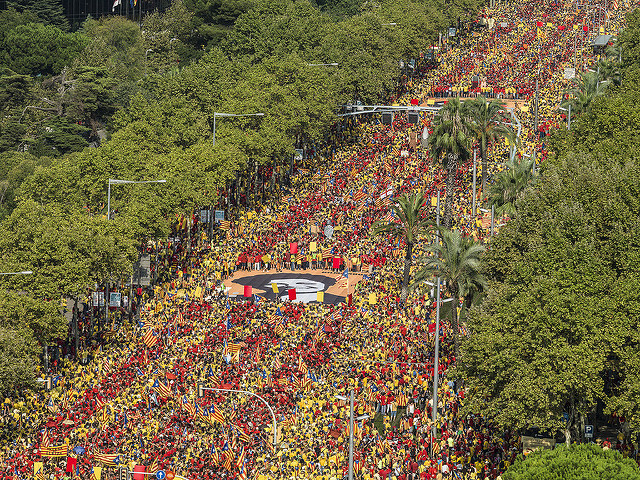 Stuart Graham, homeless case worker from Glasgow who spoke to the motion at congress, spoke to CommonSpace about why he was backing Catalonia’s democratic rights

The Scottish Trades Union Congress (STUC), which represents over 580,000 workers in Scotland, voted in favour of a motion which called for “the immediate release and acquittal of all political prisoners” and resolved the trade union movement to take political action and engage in practical solidarity to “counter any future attempts to supress the will of the Catalan people”.

750,000 Catalans joined a mass protest in Barcelona on Sunday 15 April calling for the release of the pro-independence politicians under the slogan “for rights and freedoms, for democracy and cohesion, we want you home!”

The protests came six months after the first of what is now 16 pro-independence Catalan politicians were jailed or forced into exile for charges of rebellion, sedition and misuse of public funds for their involvement in the 1 October 2017 referendum organised by the Catalan Government. If convicted, they could face up to 30 years in prison.

The motion at the STUC conference was moved on behalf of the Glasgow Trades Union Council by Stuart Graham, who told CommonSpace afterwards that the support of the whole trade union movement sent a clear message: opposition to the Spanish Government’s action was “about the criminalisation of dissent, not about whether you support independence”.

Graham added that some of the human rights enshrined in international law, which Catalan political prisoners are using to make their legal case, were also ones that have been under attack in the UK.

“Article 11, freedom to association and right to protest, has been under attack from the Tory Government with their attempts to introduce draconian anti-trade union laws. This is the right we rely on to organise. So when our brothers and sisters in Catalonia are clearly having this right suppressed, it’s our responsibility to defend them because we are really defending ourselves.”

The motion mandates the STUC to “use any and all political influence in Holyrood and Westminster” to get the political prisoners acquitted, and Graham, a member of Unison, said that he wanted to see the SNP and Labour “bring more pressure to bear” on Madrid and in Brussels.

SNP MSP Christina McKelvie called on the EU to take action against Spain’s repression at the Council of Europe in Strasbourg, but there has been criticism from within the independence movement of what has been percieved as a muted response from the Scottish Government to attempts to extradite former Catalan Education Minister Clara Ponsati, a St Andrews University professor, from Scotland to Spain. New Scottish Labour leader Richard Leonard has been silent on the issue.

“They could both be doing a lot more,” Graham said, “including pressuring the EU, to provide practical political solidarity for the Catalans. I’m not talking about influencing the judicial process, there is quite rightly an independent judiciary in Scotland, I’m talking about political pressure, because that’s what this is really all about.”

On the second resolution, calling on the trade union movement to “strengthen solidarity” with their equivalents in Catalonia, Graham said he would like “to see the STUC put together a delegation”.

“We need to be talking to our sister trade unions over there and asking them what they need from us, how can we help their struggle, and then organising around that in Scotland. For example, teachers unions here could easily be speaking out against the attempts to prevent the teaching of the Catalan language in Catalan schools and showing that sort of repression of the language at school is condemned by teachers internationally.”

Asked why this issue matters to him, Graham, a homeless case worker at Glasgow City Council, said he “couldn’t in good conscious sit and watch the right that you and I rely on be trampled on in another country and not do anything about it.”

“There is not enough leadership on this issue coming from our political leaders, so the trade union movement has a powerful voice and it needs to use that voice,” he said. 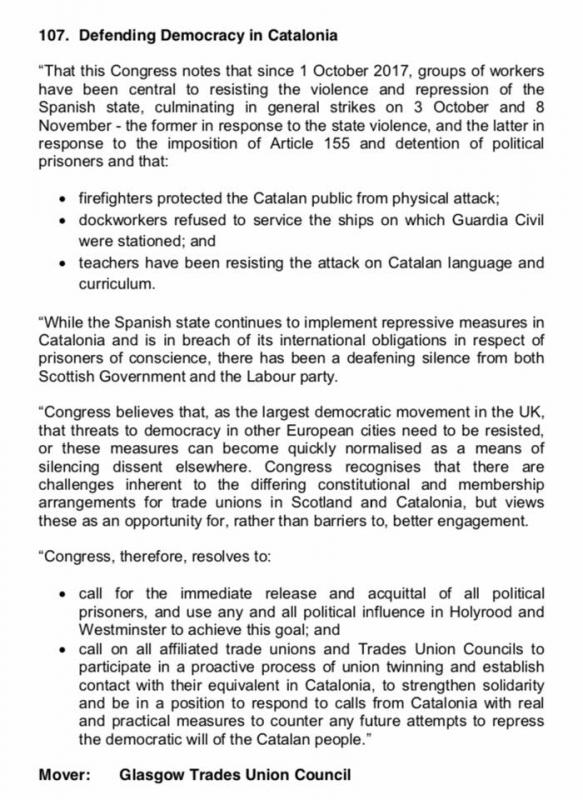 The Catalan Defence Committee Scotland, which has organised protests in support of Catalan democratic rights, welcomed the STUC’s unanimous vote, stating: “The STUC has shown the kind of leadership people in Catalonia need. Some 300 trade unionists are being prosecuted for having participated in actions in support of democracy in Catalonia. Two rappers face up to five years in jail for lyrics critical of Spain’s king.

“But these are only two examples in a wave of repression. We look forward to working with trade unions in Scotland to build international solidarity to defend human rights in Catalonia.”

Mariano Rajoy’s right-wing Spanish Government said the 1 October referendum was “illegal” citing the Spanish constitution, and utilised the  police to seek to prevent voters from entering polling booths. The police violence was aired across the world and led to widespread condemnation of the Spanish Government.

Trade unions in Catalonia organised a strike in the immediate aftermath of the 1 October violence against voters in defence of civil and democratic rights, and the Catalan section of the two largest Spanish unions, the CCOO and the UGT, which have not come out in favour of independence, backed the 15 April demonstrations.

One of those, Camil Ros, the regional secretary general of UGT, told Agence France Presse that “the majority of Catalans, regardless of their political position, agree that pre-trial jail is not justified. What we as labour unions are asking for now is dialogue.

“There have been tensions (among unions members) just like in the rest of the Catalan society. But it is not a separatist protest. It is time to build bridges and the Catalan problem cannot be solved through the courts but by dialogue and politics.”

Unison Scotland, Scotland’s biggest public sector union, released a statement last December stating that they “respect the right of self determination of all peoples” and condemned the “state violence” at the 1 October referendum.

The Spanish Government is seeking to extradite former Catalan Education Minister Clara Ponsati, a St Andrews University professor, who has been released by Police Scotland on bail pending a court case which will resume in May.