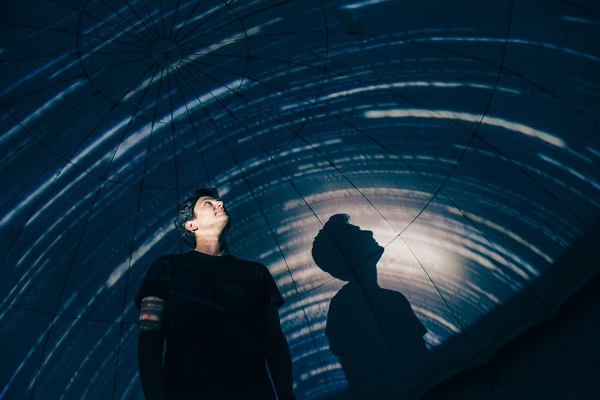 SCRIBBLE, written by Andy Edwards and Amy Gilmartin, explores one character and their coping mechanisms with mental health.

Ross is studying a PhD in cosmology, he suffers obsessive compulsive disorder and anxiety. He explains his views about the universe, his long-distance relationship with his girlfriend Fiona and how Bran Flakes help to organise his life.

Scribble is an enjoyable 40 minutes of theatre. This is largely because Alan Mackenzie, who plays Ross, has a likable and engaging stage presence. It is also because the subject matter, mental health, is addressed in an open and inventive way which keeps the audience guessing.

The subject matter, mental health, is addressed in an open and inventive way which keeps the audience guessing.

Mackenzie is joined on stage at each performance by a different actor who has never seen the script before. They take their seat on the stage at the beginning and read from the script laid before them.

Due to this, the supporting actor and the audience experience the play simultaneously with no one really knowing what is about to happen next. It is an inventive and subtle way of exploring the feeling of anxiety.

The play, however, touches upon a range of topics in a confusing and increasingly erratic manner. I don’t doubt that this was the intention of the performance, which seeks to portray the realities of living with discombobulating effects of anxiety, but I was left feeling unsure what the message ultimately was.

The complexity of the text is not the only issue. Scribble unexpectedly takes a dark turn delving into thoughts of paedophilia which are undeveloped and jarring.

The audience is invited to clap when answering ‘yes’ to Ross’s questions which begin simply with: “Have you ever been to a supermarket?” and then develop to the disconcerting.

Taking the audience out of their comfort zone and pushing the boundaries of the usual mental health conversations is important, but the delivery needs to be better considered.

Taking the audience out of their comfort zone and pushing the boundaries of the usual mental health conversations is important, but the delivery needs to be better considered.

Scribble is a work in progress, we are told this is draft 49. It is perhaps expected, therefore, that certain elements feel lacking and slightly clumsy.

The play was winner of the Assembly Roxy theatre ART award in 2017 and it will be truly interesting to see where this new work goes next.