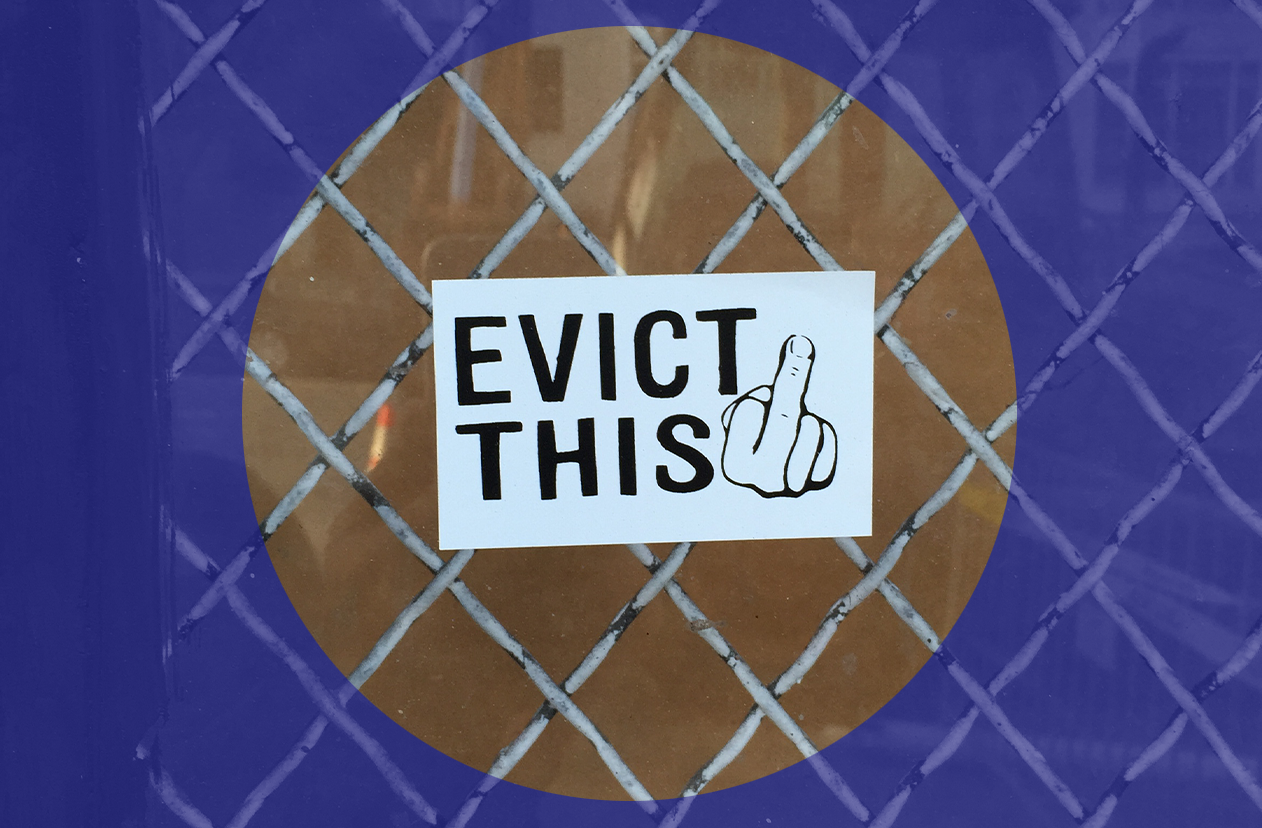 “As the necessity of extending the eviction ban grows ever more obvious, we must remember: Your landlord is not your friend. They are not your genial host. They sustain themselves by leeching from you all they can get, in exchange for which they occasionally send someone round to fix the boiler.”

WHEN the world grinds you down, you take what victories you can get.

Such a victory was achieved last week, when a West Lothian resident and her disabled son who were under threat of losing their home, despite accommodations which would meet her son’s needs not being available for a further three weeks, received a last-minute reprieve.

Their eviction was delayed thanks to a campaign by the Living Rent tenants’ union supported by SNP MP Hannah Bardell and Scottish Green co-leader Lorna Slater, the latter of whom commented: “The fact their landlord was ready to kick this family out of their home during Covid restrictions and before suitable alternative accommodation was ready shows why we need more legal protections for tenants… Housing is a human right, and if landlords cannot respect that it needs to be embedded in legal processes.”

This triumph was not only proof that Living Rent get shit done – tell your friends about it – but served to underline what more they could potentially offer, if they were given the chance. This was the argument of the Scottish Greens earlier this week, when they called for the tenants union to have a stronger voice in shaping the future of private renting in Scotland.

Given that tenants shamefully have no representation on the Scottish Government’s Private Rented Sector Resilience Group – an oversight which is difficult to perceive as being unintentional – Patrick Harvie told MSPs: “Renting in Scotland is expensive and insecure, something that has been exposed by the pandemic. The interests of landlords have been put first while Scotland still lags behind many continental European countries in tenants’ rights.

“It is unacceptable that there is no voice of tenants on The Private Rented Sector Resilience Group at a time when tenants’ unions like Living Rent have been playing a critical role in protecting tenants from abuse of power by irresponsible landlords.

“As the Scottish Government drafts a Rented Sector Strategy, it should take inspiration from countries like Sweden where tenants’ unions are commonplace, influential and very much part of the sector.”

This proposal could only be opposed either by those in the pocket of the private rented sector or unwilling to stand up to it. Scotland’s landlords will be counting on complicity or cowardice in the days to come, as they gear up to oppose any extension to the eviction ban ahead of a Scottish Parliament debate on the matter next week.

The letting agency body Propertymark today urged its members to write their MSPs, warning that there is insufficient data to support a policy decision of this kind. “Our members want to work with tenants,” complained Propertymark’s Daryl Mcintosh, “and it is not constructive to assume the default position will be for agents and landlords to want to evict.” Diddums.

Putting aside for the moment the question of how well it usually works out for tenants to rely upon the kindness and understanding of landlords, this argument does raise another obvious query: if they have no default desire to evict, why oppose an eviction ban?

While you try to figure that out – it probably won’t take long – it is worth noting that the Coronavirus (Extension and Expiry) (Scotland) Bill, announced by Covid Recovery Secretary John Swinney earlier this month, does extend certain parts of last year’s emergency Coronavirus acts, but so far only pertains to increased notice period for evictions in the private and social rented sectors.

Last week, in response to Scottish Labour deputy leader Jackie Baillie’s query over whether an eviction ban would be included in the new bill, Swinney gave the “commitment” – such as it is – that the Scottish Government “will engage constructively on this particular question.”

Those who have kept track of the growing calls for an extension of the eviction ban will notice that this was remarkably similar to Swinney’s earlier comments on the matter, when he said that an eviction ban extension was “under close consideration.” One might reasonably wonder how much more closely the question may been considered – with an electron microscope, possibly – before a decision is made. Still, it’s nice that ministers have the chance to take their time and settle upon a solution in a leisurely fashion. Tenants facing eviction have no such luxury.

Scotland is not the only place where Covid-induced eviction bans are, to the delight of predatory landlords and despair of everybody else, coming to a premature end. In the United States, where a federal eviction moratorium will expire at the end of the month, over four million people say they fear being evicted or foreclosed on, while recent studies suggest the nation’s twin crises of housing availability and affordability will worsen dramatically following the pandemic. Just as in Scotland, landlords and housing industry bodies have urged the Biden administration against growing a conscience and doing anything silly, like reinstituting a ban that would keep untold thousands from homelessness.

In a bleak sort of way, it now seems almost funny that not so long ago, some of us were talking about how the pandemic might prompt us to seek not just a return to normality, but something better than before. Obviously, such optimism did not reckon with those who have a vested interest in making sure than nothing gets better, global plague be damned.

There has been a great deal of talk – sometimes sincere, sometimes not – about how the pandemic has unified us, even in our enforced isolation. There is some truth in that – certain things we will all look back on with mutual recognition, even if we’d prefer not to. Yet to share in a collective experience does not obviate the very different agendas at play – the yawning gulf that has persisted and even widened between state and citizen, boss and worker, landlord and tenant.

For those whose position in society is defined by the power they hold over others, a return to normality means the ability to exercise that power once again; the fact they have been temporarily restricted from doing so has been the source of much self-pity from the landlord class, and we should not underestimate just how eager they are to get back to business as usual.

Landlords are wont to point out that they are not charities, and this is perfectly correct. This only makes it more baffling that the right to housing must involve those driven by profit – it’s like demanding that a right to food must employ Gregg’s the baker as an interlocutor. I like a sausage roll as much as the next person, but eventually different priorities will clash, and only one will emerge triumphant – almost inevitably, unless they are opposed, those in a position of economic power.

Amongst those who occupy this privileged position, there exists a perception that the eviction ban was an indulgence, that furlough was a leisurely sabbatical, and that state support of any kind that extended beyond the pre-pandemic norm was generosity for which we should be grateful, but should in no way mistake for precedent. Now, such forces seek to prove it.

While we have all suffered through the pandemic, that suffering was not borne equally. Any government that didn’t see this coming, or decided to do nothing about it, should answer for that sooner or later. In the meantime, as the necessity of extending the eviction ban grows ever more obvious, we must remember: Your landlord is not your friend. They are not your genial host. They sustain themselves by leeching from you all they can get, regardless of the harm they inflict from doing so, in exchange for which they occasionally send someone round to fix the boiler. Analysis of their societal impact does not require a housing expert, but a parasitologist.

When I first wrote about tenants’ need for governmental protection throughout the pandemic, I observed that Scottish landlords have a long track record of empty threats – whenever some new reform or regulation dismays them, they invariably warn that they will be forced to sell their properties and quit the business.

For once, it appears Scotland’s private landlords were not bluffing; now that the game is no longer fun, at least some of them are selling up and moving on, sacrificing a portfolio which they hoped would generate easy money indefinitely, and instead settling for the kind of lump sum most of us will never see without the aid of a sawn-off shotgun and a getaway car.

It must be nice to have the option. In considering a renewed ban on evictions – preferably, as quick as they can – the Scottish Government should do whatever they can for those who do not.

Now if you’ll excuse me, I need to start looking for some affordable rented accommodation in Edinburgh. After that, I’ll try to find something easier… like Atlantis.