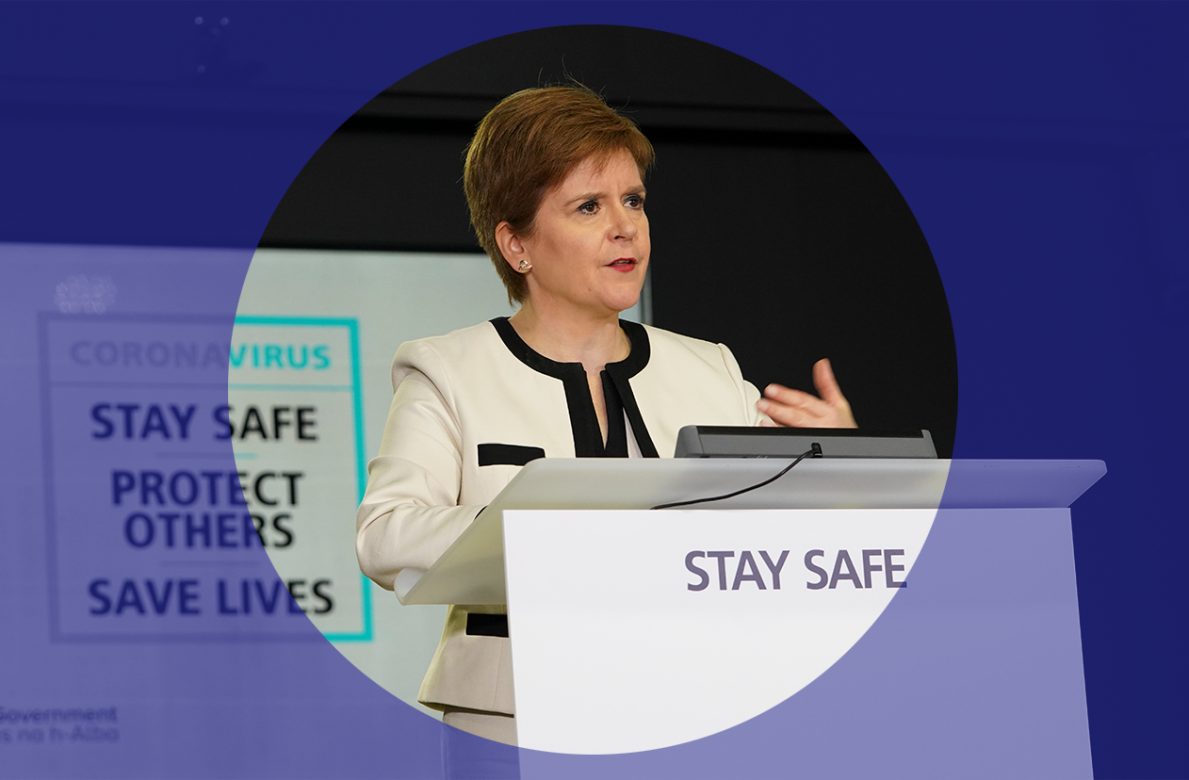 “It would be really, really nice is Hamilton’s verdict signalled a new stage of our political discourse – one which prioritised the issues facing Scotland, rather than its current and former first ministers, and where matters of sovereignty, social and economic justice, and protecting the vulnerable and the marginalised do not take a backseat to tortuous inquiries and the shenanigans they allow.”

IT wasn’t just that Nicola Sturgeon’s multifarious enemies felt she had to go. It was that the Hamilton Inquiry – which yesterday exonerated the first minister of breaking the ministerial code – was, they seemed to think, the easiest way of achieving that outcome.

There were a great many who perceived the Salmond affair in general and the inquiry in particular as a kind of cheat-code for achieving their political goals – bringing down Sturgeon in a manner that voters so far stubbornly refuse to do, frustrating the cause of independence, advancing their own cliques, grudges and ideological priorities, and even sowing discord about the integrity of Scottish devolution.

The fact that the first and most prized of these did not come to pass has already proven difficult to swallow for the many arrayed against Sturgeon – from the unionist opposition to the right-wing press to her internal critics within the SNP – some of whom have quickly refocused their attention upon today’s report concluding that Sturgeon “misled” the separate Holyrood inquiry.

Attempting to present this as more significant than the findings of James Hamilton QC will be tricky, however – not only because of their apparent erstwhile faith in the probity of the independent advisor, but in light of the criticisms, divisions and accusations of leaks, smears and “naked party politics” that continue to hang over the committee’s investigation.

Writing in the Guardian in October last year, the journalist Dani Garavelli warned: “It is important to guard against the inquiry being hijacked by those whose principal aim is not to establish what went wrong, but to bring down the first minister by any means necessary.” If attempts to guard against such a hijacking were made, they failed.

In a week of milestones and demarcation points – not just the culmination of the two inquiries, but the one-year anniversary of Scotland’s first national Covid lockdown and Holyrood’s recess ahead of the May election – it would be tempting to consider at least Hamilton’s findings conclusive. An innocent child, killing time while waiting for the tooth fairy, might even wonder if such a clearly stated verdict could draw a line under the whole thing, and allow Scotland’s purgatorial discourse to embark upon something new.

Miracles may occur, but I doubt it. The Salmond affair, with all its tangential controversies and side-dramas, has proven too useful to too many unscrupulous political operators in Scotland and beyond, who convinced themselves it was key to securing final victory over an ever-expanding galaxy of enemies – not just Sturgeon and Peter Murrell, but her allies and sympathisers, the SNP high command, the legislation and policies they have supported, and (as ever, this is where it gets weird) the insidious spectre of ‘wokeness’ which has proven so effective at unifying sundry reactionaries, edgelords and other types of angry potato.

Given how much water they have drawn from this particular well, they will likely be unenthusiastic about abandoning it entirely. An indication of this can be seen in the petulant reaction of the Scottish Conservatives, around whom still exists a carefully confected lack of clarity over precisely what circumstances would need to occur for them not to demand Nicola Sturgeon’s resignation. At the time of writing, their apparently doomed no confidence vote was still on the schedule, so… rock on guys, I guess.

Beyond the Holyrood chamber, and regardless of Hamilton’s conclusions, there are those who will spend years to come darkly muttering about conspiracies and plots and the elaborate Oliver Stone production of these events perpetually playing within their tortured imaginations. That is to be expected; some people are always going to believe what they want to believe, regardless of any inconvenient realities that get in way, and nothing can change that.

The second and infinitely more valid reason why the entire saga will not and should not be put to bed just yet is, as the New Statesman’s Ailbhe Rea wrote this morning, the “failure by the SNP’s opponents to treat this as a serious story about real women bringing serious allegations, rather than a soap opera in Scotland’s ruling party that would, somehow, in a way the opposition parties hadn’t quite worked out, destroy the SNP.”

Scottish Green co-leader Patrick Harvie wasted no time in highlighting the immediate issues due for attention, writing on Twitter yesterday: “Certain MSPs have shown concept for the women involved & for the rules of @ScotParl by leaking confidential evidence and conclusions. If anyone’s resignation is still needed, it is these MSPs who should step down now, and who should not be candidates for re-election in May.”

The broader work that must be done was articulated well by Fiona Robertson, co-chair of the SNP Disabled Members Group and the party’s former Equalities Convener, who noted that “this has shown how important it is that we properly overhaul how sexual harassment and assault is dealt with in Parliament, with an independent complaints stream staffed by experts… These complaints shouldn’t be subject to political processes and political pressures. The leaks from the committee investigation have demonstrated why complainants need to be able to trust their confidentiality will be preserved.”

It should be emphasised that none of these concerns are new. Indeed, over the latter months of the two inquiries, concern for the original complainants were voiced by almost everyone involved; however, given the various other agendas at play and the manner in which the Holyrood inquiry became a political football, there were clearly those for whom such concerns were not the highest priority.

A notable exception to that has been Rape Crisis Scotland. Given how many grand pronouncements we have heard about ‘integrity’, it should be recognised that the organisation has displayed it without fail throughout the entire conflagration. Never allowing themselves to become pawns to outside interests, their consistent support for the complainants and their demands that all concerned hold themselves to the highest standards of awareness and conduct have been beyond reproach. When the question returns – and it will – of how the Scottish Government and Parliament can further reform its complaints procedures and the law itself, Rape Crisis Scotland should be among the first turned to for advice.

Should these matters become increasingly prominent – though that far from guaranteed, as much of the media has shown itself to be less interested in these worthy topics than providing breathless coverage of a first minister’s potential downfall – things may grow even more uncomfortable for the cohort who believed the Salmond affair could provide a short-cut to glory. It remains possible that very same belief may prove to be their undoing, now that the hopes they placed in Hamilton have come to nothing.

Those within the independence movement who supported Salmond’s accusations against the Scottish Government will need to reckon with the fact that, beyond a coolness towards the first minister approaching permafrost levels, there’s not much ideological cohesion between them, and what little there is isn’t pretty. True, the curious idea did emerge in certain quarters that the ‘Salmondistas’ might represent some kind of hope for the Scottish Left – a theory which hinged upon not thinking about it for more than 10 seconds, but which some found strangely compelling nonetheless. Whether that fantasy continues to be indulged remains to be seen.

Their choice is this: they can refuse to move on and spend the coming months and years becoming a sadder Caledonian equivalent to those people who spend their lives studying the Zapruder film, or they can actually try to talk about wider material issues, beyond their usual vague invocations of Truth or Integrity or Extra Dessert or something. Granted, many of them aren’t actually very good at that – and besides, doing the hard work of actual politics cannot deliver the psychic satisfaction of Sturgeon’s resignation, which may have been all they really wanted. It is a grim option, but the only one they have if they wish to avoid absolute irrelevance.

A similar problem faces the unionist opposition parties – if they want Sturgeon gone, well, there is this election coming up. They might try some actual campaigning and see how that works out for them. One can only imagine how enthusiastically the Scottish Tories will respond to the idea of trying to win power on their own merits – in the first place, they’d have to find some – but again, them’s the breaks.

It would be really, really nice is Hamilton’s verdict signalled a new stage of our political discourse – one which prioritised the issues facing Scotland, rather than its current and former first ministers, and where matters of sovereignty, social and economic justice, and protecting the vulnerable and the marginalised do not take a backseat to tortuous inquiries and the shenanigans they allow. But this will not happen on its own – acting as if it will would be just as complacent as those who thought Hamilton might defenestrate Sturgeon while they did nothing but cheer from the side-lines. It will take effort.

Of course, this is not the responsibility of the individual – it would be both mistaken (and rude) to point to any member of the public and suggest it’s their fault we don’t have a more enlightened, productive political culture. But extra-parliamentary mass-engagement remains the best hope we have of changing that culture – not least because we certainly cannot rely on the major opposition parties to do so.

There is still much to criticise Sturgeon and her government for. Unfortunately for her most high-profile critics, it lies with her record and policy programme – two areas which her opponents within parliament have famously had either little luck (or even interest) in gaining ground. As a nation, we are fortunate to have passionate campaigners beyond professional politics – the Living Rent tenants’ union, for example, has held the Scottish Government to account for the lack of desperately needed rent controls more diligently than anyone within the Holyrood chamber – but more will be necessary to extricate Scottish politics from its addiction to intrigue, conspiracism, compromise and self-interest.

If genuine work is to be put into moving the SNP leftwards, or building a pro-independence Scottish Left which can effectively critique and challenge it, then that must be done through organising, through political education, and through substantive debate which reckons with those forces, problems and oppressions that affect countless thousands of people throughout the country – and not through the elevation of a few self-promoting, self-regarding, self-styled ‘dissidents’ eager for cheap and dirty ways to secure power and influence.

Oddly enough, within a few hours of the Hamilton Inquiry being published, a press release arrived in my inbox from the Equality Network, which yesterday launched its LGBTI election manifesto. It calls for gender identity health services “that are fit for purpose, ending years-long waiting lists”; reformation of the Gender Recognition Act, along with a ban on conversion therapy; better understanding of LGBTI lives and issues in health and social care, and especially mental health services; continued implementation of the LGBTI inclusive education programme agreed by the last parliament; practical steps to tackle hate crime, homelessness and isolation, and “clear leadership from the Scottish Government on LGBTI equality, here, and in their international relations”.

Who knows? Maybe we’re closer to discussing the issues that matter than I thought.