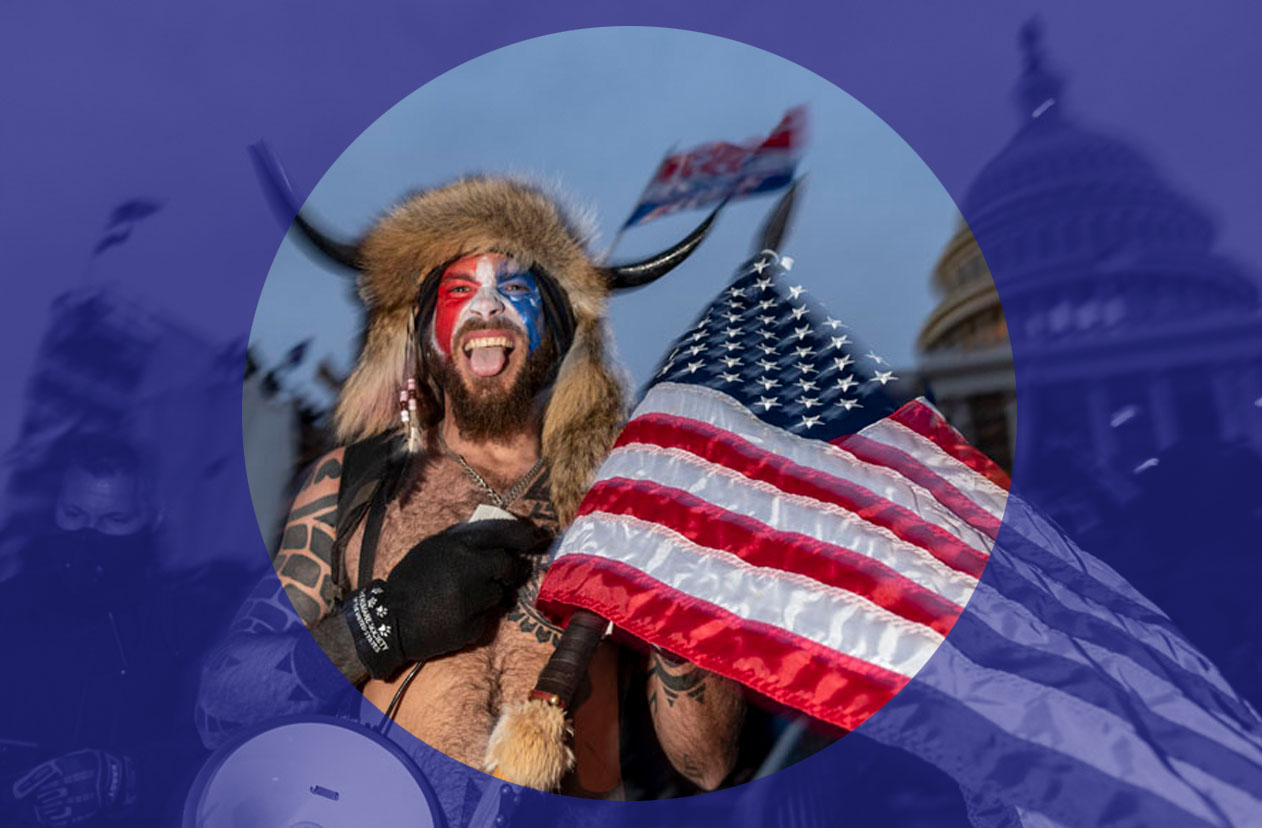 “Based on past experience, it is unlikely that those who bear some measure of responsibility for the siege of Washington will be forced to answer for it. Who or what exactly has the power to compel them into accountability?”

IF THERE IS anything we have learned from the events that transpired in Washington DC on Wednesday – anything useful, at any rate – it is that there are more frightening things in this world than ‘hard questions’.

Many, we have been told, will have to face such questions in the days to come. Most immediately, there is the DC police, along with other relevant authorities, who offered such pathetic, tissue paper-thin resistance to an armed and belligerent attack by a motley assemblage of white supremacists, unapologetic fascists and revanchist Trump supporters – the crossover between these constituent groups having been demonstrated long ago – upon the US Capitol, along with the bespoke and suddenly fragile notion of American democracy itself. So half-hearted was this resistance, a cynic might mistake it for collusion. Explanations of how these authorities can be ‘reformed’ will no doubt be forthcoming.

There is no shortage of those who have, with absolute justification, highlighted the unavoidable contrast between the kid-gloves approach of those supposedly charged with defending the heart of the American political system and the police reaction faced by every significant appearance, demonstration or insurrection of the American Left any time this century. This is worth noting, but it’s also worth asking for whose benefit: those who marched for Black Lives Matter over the past several years – and bled for their trouble – will need no reminding. Their scars and losses do that far more ably.

When Iraq veterans tried to stand in protest against an illegal, imperialist war in 2007, riot police arrested anyone – hundreds, by some accounts – who got within spitting distance of the Capitol steps. That this double-standard exists in the United States – and elsewhere – should be a surprise to no one; anyone who professes to still be shocked should also have to explain why such naivete persists.

Next, of course, is the Republican Party, still flailing wildly in the aftermath of Donald Trump’s loss of last year’s presidential election. Following those scenes within the halls of US power at once surreal and – to some – predictable, they too will face intensely awkward questions regarding where precisely they stand, what they support, and how their previous words and actions can align with statements of condemnation hastily issued and crocodile tears shed in the aftermath of such bizarre, unsettling scenes. “No… it wasn’t us… it was the Warriors…”

Then, there is the theoretically incoming Biden administration, led by a man who in November – or, from another perspective, several hundred years ago – announced that he would reach out across the aisle: “We must stop treating our opponents as enemies. We are not enemies. We are Americans.” In contrast to his habitual incoherence, Biden has made one thing very clear since election night: he is more willing to break bread with American conservatism – or at least, the reasonable and rational version of it which exists within mainstream US liberalism’s tortured imagination – than with any on the Left whose agendas – Medicare for All, defunding the police, a response to Covid-19 that passes the laugh test – might prove inconvenient to his own. He made his choices.

A reconvened Congress has now certified Biden’s victory, even as events have rendered his olive-branch strategy absurd. Yet how precisely does one reconcile with those who have made clear they will respond to such a victory with berserker violence? How does the fuzzy, retrograde bipartisanship of a bygone American establishment overcome a conspiracist mindset nurtured by the highest office in the land? You want to detoxify the politics of this nation, to heal its division? The world  – particularly those parts of it where domestic unrest has either been fomented or condescended to by US foreign policy – is waiting, popcorn in hand.

And finally, there is the media – not just the cartoonish far-right subsection of journalism which happily made itself courtiers to the Trump administration, but all those whose reaction to almost every one of its iniquities was invariably to warn that folk were getting worked up over nothing; that the movements unleashed and emboldened by Trumpism either had legitimate grievances or were not worth worrying about; and, most damagingly, that the threat posed by the American Right over the past four years paled in comparison to those forces, real or imagined, that stood against it. Remember, Antifa are the “real fascists”. In the aftermath of Charlottesville and Heather Heyer’s murder, the true danger was ‘cancel culture’ and ‘identity politics’. Some of these once-confident voices have suddenly become circumspect, while others have retreated into the security of familiar nonsense. Few expected otherwise.

Finally, almost as an afterthought, there is Donald Trump himself, who has already offered a weak and pointless condemnation of events which even the most tremulous of observers have acknowledged that he himself incited. Surely, a dewy-eyed innocent might ask, he must face more of a reckoning?

All these ‘hard questions’ are valid, even if there is no one with the power to affirm that validity or render it relevant. Yet the Trump years, and the many that preceded it, taught one lesson to all those mentioned above: when such questions emerge, ignore them. First, dismiss them as irrelevant, and then work tirelessly to make them so. So policing in the US serves power and capital via a racist and class-oriented authoritarianism? ‘No it doesn’t’. The Republican Party has failed at every turn to oppose or even slow the gross mutation of Trumpism into the form we saw yesterday, and will blithely and happily continue in that vein? ‘There are good Republicans’. Biden’s approach to US politics is a wilful delusion which helped to lead us here, and can only lead to further trouble down the line? ‘America needs a time to heal.’

Based on past experience, it is unlikely that those who bear some measure of responsibility for the siege of Washington will be forced to answer for it. Who or what exactly has the power to compel them into accountability? Why would they engage in a game they can only lose when they can opt out, and persist in fantasies which continue to offer rewards? Norms matter only to those abide by them. This, Trump has always understood, or at least taken advantage of, but he is far from the first right-winger to stumble upon this cheat-code, and he won’t be the last.

In sharp contrast to this, there will no doubt be much debate amongst those opposed to what we saw on Wednesday, and dismayed by its implications. This is the perennial and unavoidable handicap of the Left – engaging with questions that its enemies will happily ignore and caring about whether or not its answers make any political or moral sense. We can only speculate about where such debates will lead.

Characterising those who participated in Wednesday’s attack quickly became a matter of contention (though hopefully we can dispense with the idea that those involved were ‘anarchists’ – anyone suggesting otherwise should pick up Peter Marshall’s excellent history of anarchism Demanding The Impossible, or failing that, a dictionary). There has already been a revival of the old, febrile debate over whether Trumpism can be characterised as fascism, conservatism, or some corrupt, self-advancing chimera that transcends ideology while also taking advantage of it.

Personally, I never had much of a dog in this race because all of the possible conclusions made similar demands. If Trump and the movement around him can be called fascist, then we must admit not only that the GOP and the mainstream Right in general acts as an amendable hothouse for fascism, but that fascism does not necessarily look, sound or act as it did in the 1930s; our definition of it must therefore widen considerably.

If Trump is, on the other hand, not a fascist, then liberals and centrists the world over must face what Marxists have been telling them for the better part of a century – conservatives will happily get into bed with fascists and vice versa, each using the others means and muscle to advance their own ends.

More immediately, there has been a good deal of smug downplaying from those prepared to explain at great length that this was not a coup, what a coup can do, and what makes a coup true. Such distinctions are not unimportant – no key infrastructure or nuclear codes were seized by those dressed for Nazi Comic-Con. But it should also be recognised that many Americans – the people on the sharp-end of the Trump administration’s policies, who have weathered the toll of a global pandemic that would once have been unimaginable, and whose interests have been defended only by movements that will not be occupying the Capitol anytime soon – were deeply frightened by what they saw on Wednesday.

That fear does not merit mockery or dismissal; I have no problem with those who prefer to react to the darkness and dangers of our age with nihilistic irony-poisoning, but such an option is not available to everyone, nor are its comforts an adequate response to what they face. Solidarity demands more.

If there is one thing absolutely not demanded by the spectacle in Washington, it is a lecture from an over-opinionated Scottish journalist on ‘what the American Left should do next’, particularly as the Left in America – troubled and disenfranchised as it is – remains far better organised and widespread than its Scottish or even British equivalents (there are those who bristle at this fact, but that’s their problem). From this distant vantage point, all that can be offered – for now – is recognition.

First and foremost, what the wider world can recognise is that, while many of those who signalled their shock over the past day were previously oblivious, there were people who stood against the forces which descended on the Capitol long before Wednesday. Dedicated American anti-fascist and anti-racist campaigns, and those who marched and worked in support of them – who drew no salary for their efforts, who took incredible risks, and who are as ordinary and extraordinary as anyone – were the ones who took action while others talked… or, for that matter, wrote reflective, self-indulgent articles, just like the one you’re reading now.

Anyone wondering where the United States can, will or should go next could do worse than look to them.