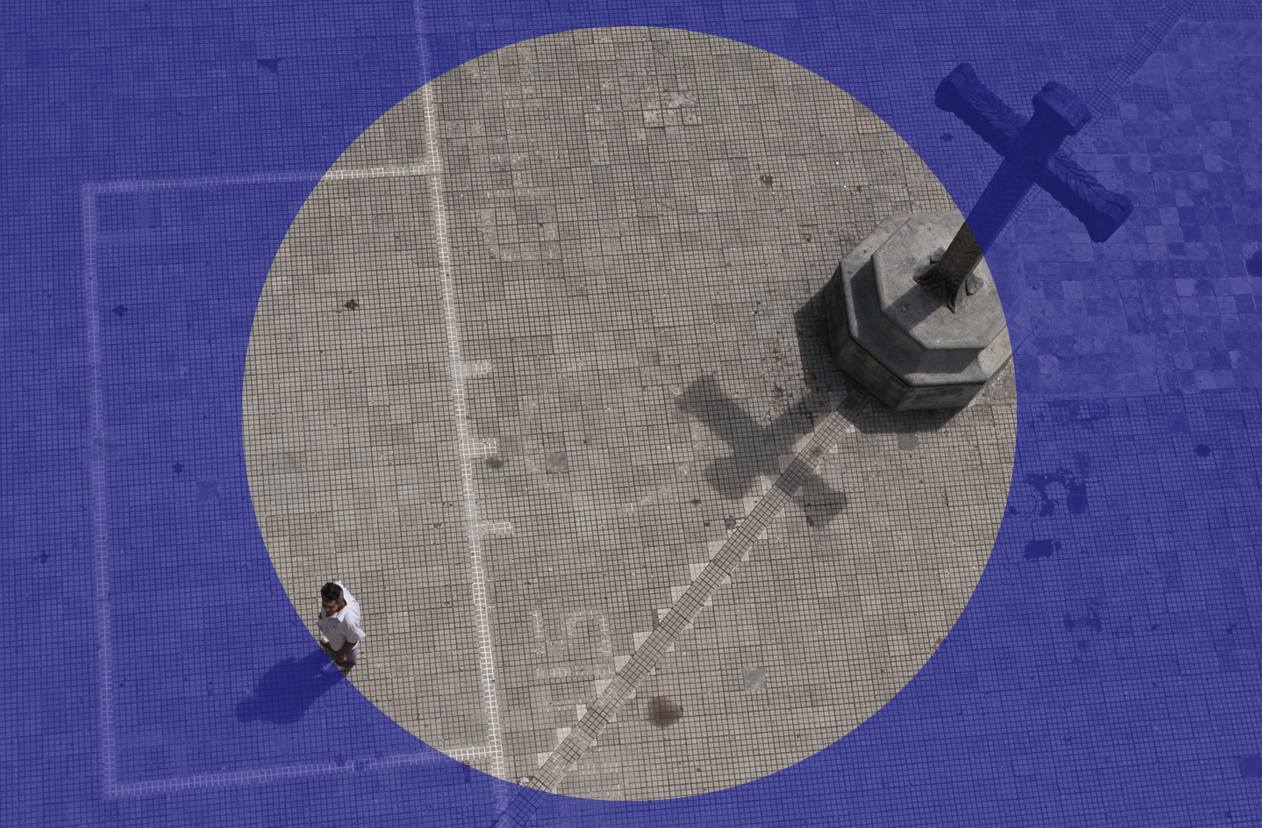 “Children in Scotland still do not have the right to opt out of the Christianity-focused ‘religious observance’ which bafflingly remains a statutory duty for all state-funded schools to provide.”

THE TEACHER was not, by any means, a bad or ignorant person. By the standards of the 1990s, she was sensitive to the diversity of her classroom and, in my recollection, did what she could to accommodate it.

Whenever the pupils of this state primary school in a leafy Edinburgh suburb were obliged to leave their lessons to attend a Christmas or Easter service, or simply troop down to the assembly hall to endure another inexplicable rendition of the always-terrifying ‘He’s Got the Whole World in his Hands’, the faculty would make allowances… up to a point. Obviously, no Jewish, Muslim, Sikh or Hindu child was going to be forced into an act of Christian observance. A lack of faith, on the other hand, was a different matter.

The facts were as follows: after several years of putting up with these curious and compulsory exercises in a faith I had decided against around the same time The Animals of Farthing Wood was still on the air, I announced I would rather opt out. While everyone else went to commit those crimes against tunefulness called ‘hymns’, I preferred to join the few other non-Christian kids in the school library for an hour or so. It seemed more edifying.

Apparently, this wouldn’t do. As my teacher explained to my equally godless parents – who may or may not have been able to keep a straight face – she was concerned that, if I were to be excused from religious observance, my reasoning might act pour encourager les autres. If word got out to my classmates that you could avoid church just because you didn’t believe in God, she fretted, “it might open the floodgates”.

My Marxist parents were less than sympathetic to these concerns, and so it was I achieved my first epic victory against monotheism. Looking back, I’m quite glad my atheism was at its most militant at ten years old – people who get really into it at a later age can become weird, tiresome or worst of all, Christopher Hitchens fans.

This was not the end of the matter – high school followed primary, where we were introduced to the misleadingly named subject of ‘Religious Education’, which schools were also required by law to provide. Despite what its defenders may argue, this should not be confused with the far superior approach of the French education system, in which philosophy is a standard part of secondary education. I can only speak anecdotally, but deep theological discussions did not appear to be R.E.’s remit. I do remember our class being shown a movie in which Keanu Reeves portrayed the Buddha, but to this day, I’m not sure what we were supposed to take away from that.

I was reminded of all this by yesterday’s publication of a report from Together, the Scottish Alliance for Children’s Rights. Backed by 60 organisations including NSPCC Scotland, Save the Children, Aberlour, Children in Scotland and the Scottish Youth Parliament, the report highlights 30 key issues facing children and young people’s rights in Scotland.

The report as a whole makes for grim reading: children in Scotland are insufficiently educated about their rights under the United Nations Convention on the Rights of the Child, and the complaints mechanisms they have access to for when those rights are violated are “lengthy, inaccessible and can result in them being punished for raising their concerns.” Discrimination against disabled, minority ethnic, Gypsy/Traveller, migrant, asylum-seeking, refugee, care-experienced and LGBTI children persists in communities and schools, the latter of which continue to make largely unregulated use of physical ‘restraint’ and ‘seclusion’ – innocuous terms which often obscure the abusive nature of these practices.

Amidst all these valid and urgent concerns, the report also highlights the fact that children in Scotland still do not have the right to opt out of the Christianity-focused ‘religious observance’ which bafflingly remains a statutory duty for all state-funded schools to provide. While parents can withdraw their children from this, just as in my day, the pupils themselves have no equivalent right, in defiance of Article 12 of the UNCRC (the right to be listened to) and Article 14 (the right to choose their religion/belief, or not to follow any).

Responding to the report’s release, Humanist Society Scotland Chief Executive Fraser Sutherland commented: “For years the Scottish Government have championed themselves as being world leading on children’s rights. However, four years after being told to sort out religious worship in schools by the UN, nothing has changed. young people are still denied the right to decide if they attend religious worship during the school day in a clear breach of their rights.

“The government must respond with meaningful action to this latest report – one in a long line of calls over many years on this issue. We cannot have another generation of young people in Scotland denied their right to freedom of religion and belief in schools. All because government ministers fear standing up to some religious groups who back the status quo of refusing to give young people no choice.”

As Sutherland notes, these concerns are not new: The UN Committee on the Rights of the Right reported in 2016 that children in Scotland could not legally withdraw from religious observance and recommended that laws making it compulsory be scrapped, prompting the Scottish Government to engage in its favourite pastime and ‘consider’ reform. Four years later, it is worth asking where those considerations have led.

Of all the concerns raised by Together’s report, it would be easy to dismiss qualms over religious observance as less important than some others (read the details of exactly what physical restraint and isolation in schools entails, and you’ll understand why). Nevertheless, this is no excuse to ignore the matter once again.

Almost every issue identified by Together demands action, and in many cases more than that – new or updated legislation, increased and better focused funding, and the long, hard process of public education for both children and adults. Rectifying Scotland’s antiquated notions of how and where children and religious faith interact should be comparatively simple.

If that is the case, then why does religious observance persist in Scottish schools? Fraser Sutherland’s contention that the Scottish Government remains feart of religious groups is the most convincing explanation, but the power of that lobby is not what it once was, nor should it be. The Scotland of today could not be mistaken for the Scotland of my parents’ generation, where even the swings in the park would be tied up and padlocked on Sundays.

This evolution disquiets some, and it is far from a purely Scottish phenomenon. Describing what it was like to grow up Evangelical in 1990s America, New York journalist Sarah Jones this week nailed the essential point: “Whatever the cause, whatever the rumor, the fear was always the same. It was about power, and what would happen if we lost it.”

That paranoia has a Caledonian equivalent. For some years, I have been reading variations on the warning that Scotland has fallen prey to the “shrill intolerance of a secularist inquisition” – most recently from the columnist Kevin McKenna, who can regularly be found using his platform in several national newspapers to explain how people like him have been silenced – and have always been somewhat disappointed to find it’s not true. The growth of secularism in Scotland has not come through the nation being led towards it by our fiendish political class – that would require some actual backbone on their part – but vice versa.

Religious observance in schools, along with all the other odd leftovers from a bygone era when Scitland’s Christianity was beyond question, has not halted the nation’s steady, organic drift away from faith. While the 2011 census found over half the population considered themselves religious, the 2016 Scottish household survey discerned those numbers were falling, putting the religious in a minority of 48.5 per cent. As of 2017, the number of people who regularly attend Christian church services in Scotland had fallen by more than half over the preceding 30 years, going from 854,000 in 1984 to 390,000, or 7.2 per cent of the overall population. Of that number, 42 per cent were over the age of 65. If Scotland has become more secular, it is because the Scottish people chose to make it so.

Reflecting this in our schools should be a democratic imperative, or at least a good start. Earlier this week, I argued that the only realistic future for an independent Scotland in which social and economic change could be embedded was a constitutional republic. Such a constitution, wherein a nation could define not only itself but what it hopes to become, should be secular in nature – not to enforce the exclusion of the godly, but the inclusion of everyone else.

Regrettably, it is unlikely we will begin drafting that constitution anytime soon. In the meantime then, we might at least respect children enough to let them decide matters of faith for themselves. It might, if we’re lucky, open the floodgates.

Picture courtesy of Eric B