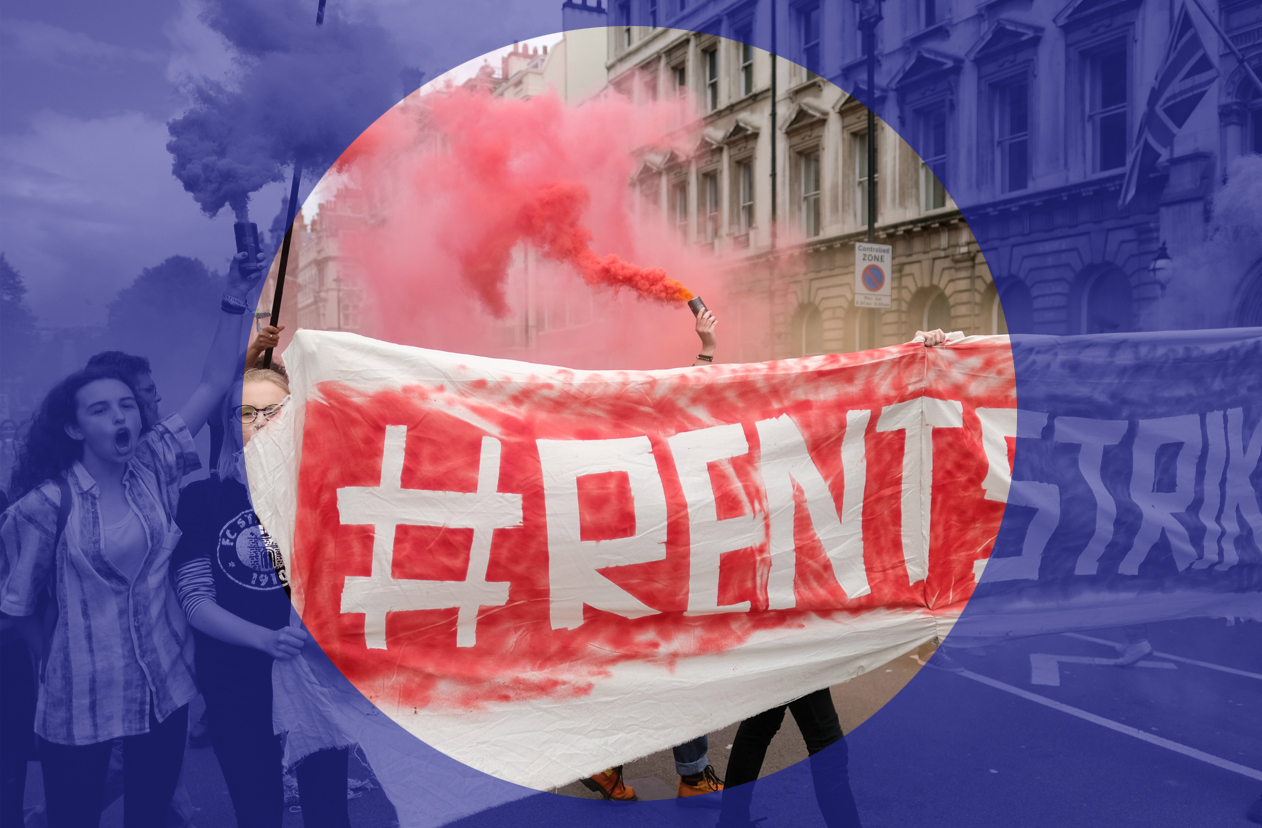 THE CORONAVIRUS pandemic has finally confronted landlords with their nightmare scenario: a crisis from which they cannot threaten to run away.

In recent days, pressure has mounted internationally on governments and the private rented sector to address the impact on tenants of both the virus and the financial toll of self-isolation.

In Scotland, over 6,500 people have signed a petition by the tenants’ union Living Rent calling for a temporary ban on all evictions and for tenants affected by the pandemic to be granted ‘rent holidays’. In light of the near-impossibility of self-isolation for those in precarious, low-paid work, the petition argues that tenants deserve to know “they won’t face destitution for doing the responsible thing.”

“It is unconscionable that anyone should even have to worry about being evicted from their home at this time. The Scottish Government urgently needs to take drastic action to protect tenants,” commented Living Rent’s Emma Saunders.

Elsewhere, Tax Research UK campaigner Richard Murphy has also argued that private renters who contract Coronavirus should be permitted to live rent-free for up to three months, writing in a recent blog post: “Far too many people have too few savings to survive major periods of economic inactivity without massive prejudice to their short-term and long-term wellbeing.

“I would suggest that the grant of that extension should be automatic to anyone who does not make a due payment of rent on the required date during the period of the epidemic. They should be automatically granted this extension by the landlord without having to make any further application or to complete any additional paperwork.”

Earlier today, the UK Government partially met Murphy’s demands, announcing a package of emergency measures which included a complete ban of evictions throughout England for a period of three months. This follows a series of hastily drafted bills and initiatives internationally, which have similarly suspended eviction proceedings to varying degrees.

All this places the Scottish Government’s lukewarm response so far in a shameful context. Addressing Holyrood today, communities secretary Aileen Campbell confirmed that the Scottish Government would pursue a temporary change in the current Private Housing (Tenancies) Act, extending the period under which landlords can move to evict a tenant from three months to six.

“Let me be clear,” Campbell told MSPs, “we do not want private sector landlords to be disadvantaged by lack of rent. However, the reality of what we face means that if landlords don’t support their tenants, then it’s not just the tenants who will be negatively impacted, it will be all of society who will have to collectively pay the price.”

While the case could be made that landlords are part of society – although they are sometimes prone to acting otherwise – Campbell’s statement was an entreaty, rather than a demand. A non-permanent adjustment in legislation was couched in terms that begged the indulgence of those used to setting the terms for the private rented sector.

This obsequiously diplomatic tone was echoed in Kevin Stewart’s letter to the Scottish Association of Landlords (SAL) today, in which the housing minister asked Scotland’s landlords and letting agents – ever so politely – to ensure no tenant faces eviction as a result of the pandemic.

“I hope you will recognise at this challenging time that landlords must be flexible with tenants facing financial hardship and signpost them to the sources of financial support available,” Stewart writes, encouraging landlords to “urge your tenants to apply for Statutory Sick Pay and Universal Credit where they are eligible.”

For those who have never been on the receiving end of Universal Credit, it is worth noting that the rancid fruit of Tory welfare reform rarely guarantees enough to pay the rent, particularly in a country painfully free of the kind of rent controls Scotland’s landlords have fought so frenetically against. It is therefore entirely possible that such immediate options are not hugely reassuring for Scotland’s tenants.

“I know we can get the balance right between protecting tenants and ensuring landlords can continue to provide housing,” Stewart adds with mysterious confidence, before noting that “we are in unparalleled times, and there will be an expectation that all landlords help their tenants right now as part of an overall society response.”

The letter, along with all other Scottish Government comments on the matter thus far, avoids the obvious question: “Or what?”

SAL, unsurprisingly, has responded warmly to such vaguely worded governmental requests that they not throw the poor and vulnerable out onto the street in the middle of a global health emergency, with their chief executive John Blackwood writing that the organisation was pleased to hear Campbell’s recognition “that support must be given to private sector landlords at this time.”

Of course, there is rarely a time when private sector landlords do not demand support, or fail to suggest that they are being insufficiently coddled.

The original three month timeframe for evictions due to rent arrears was going to drive landlords away from the sector, we were warned. As it turned out, it did nothing of the kind, but that didn’t stop those same landlords – valiantly struggling through the Sisyphean task of turning a profit from rented accommodation during a housing crisis – from issuing similar doom-laden prophecies over the Mary Barbour Bill, or potential reforms to council tax, or every time someone even breathed the words ‘rent controls’.

Such tactics can be observed internationally; by an astonishing coincidence, the more expensive somewhere is to live, the more hysterically local landlords tend to fight against any suggestion of regulation, as seen in New York last year, when elements of the city’s real estate lobby attempted to strike down newly enacted rent law as unconstitutional. Anyone who’s tried to rent a flat in Edinburgh recently may understand why similar attitudes hold such purchase here.

However, the ongoing pandemic presents landlords with a problem. Their usual solutions won’t work; they cannot simply threaten to take their ball and go home, not least because doing so would in all likelihood be more financially self-destructive than tolerating an interruption to business as usual.

Warnings of landlords fleeing the market if everything isn’t just so may be as empty as the nearly 40,000 vacant private sector properties in Scotland (which for some reason cannot be used to house the homeless). Despite that, as a lobby they have had great success in convincing both government and society that housing is the only human right that should come with a price tag attached. Nevertheless, that success depends on them never following through on their regular, petulant ultimatums.

Now, faced with the extraordinary expectation that the sector must act in the interests of the common, social good, combined with mounting international precedent of how such a grand realignment might work, landlords are on the back foot. And yet judging by every indication thus far, the Scottish Government has failed to take advantage of it.

More significant action may yet be taken – things are changing rapidly – but in the meantime, making landlords wait three extra months before evicting those unable to pay their rent and pointing those in need towards welfare provisions that were driving people into poverty even before the nation and the world were plunged into crisis simply won’t cut it.

A moratorium on evictions for the duration of the crisis is the least of what Scotland requires. As tenant advocates in New York are currently demanding, there must also be a suspension of rent, automatic forgiveness for any rent, mortgage and utility debt accrued over the course of the pandemic, significant and rapid investment in social housing and a rehousing scheme for the homeless on an unprecedented scale.

It should be borne in mind that other, less polite options remain available beyond the initiative of the UK and Scottish governments. Those who balk at the apparent radicalism of such proposals should try to imagine what a rent strike looks like when not safely confined to the annals of socialist history – a rent strike where the participants are not marching on the streets, but securely ensconced in the homes they are fighting for, quite possibly well-supplied after weeks of stocking up, at a time when finding willing enforcers to extract rent payments, in person and on site, will be tricky to say the least.

The Scottish Government must seriously consider how much of the nation’s welfare it is prepared to endanger in an effort to keep those who profit from the private rented sector sweet, and what measures it is prepared to employ to get them in line. Landlords, as they never tire of making clear, are rarely happy – so why should their happiness be prioritised in a time of crisis?