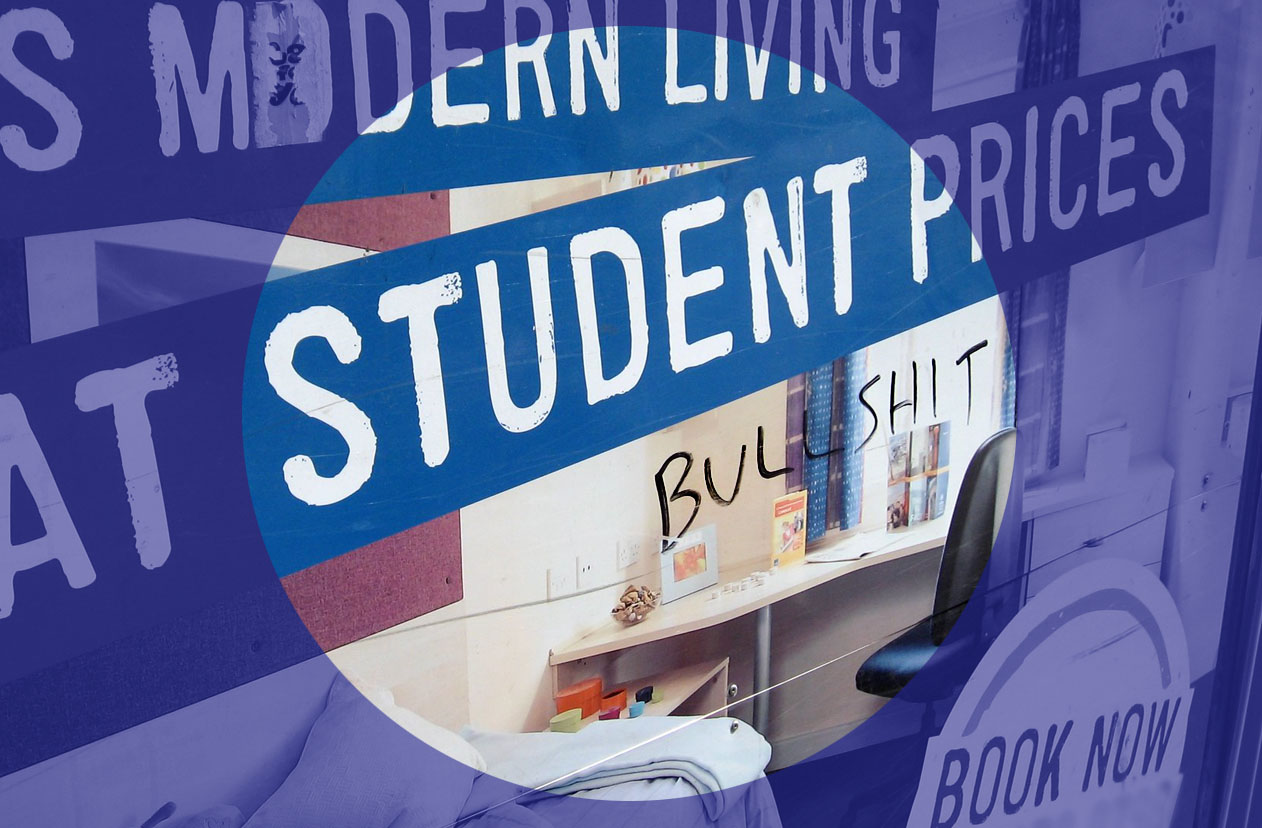 “If university authorities and other landlords are so complacent as to think that they can get away with it, we can only conclude it is because the Scottish Government has given them no reason to think otherwise.”

WHEN lockdown returned this month, familiar in all the wrong ways, there were those who hoped – probably without much cause – that some lessons might have been learnt by those in power from what we all experienced over the course of 2020.

Most obviously, there were the strains placed upon the national population, at once easy to list and difficult to properly quantify. There were the demands placed upon teachers and nurses, and the dangers faced by the elderly and the vulnerable. Inarguably, Scotland’s students should have been amongst those under consideration.

It would have been nice if the attention they received during their first bouts of quarantine in student accommodation had been less superficial and short-lived, but that would have required bucking some long-established trends. In Scottish and British politics, concerns over student welfare are ephemeral at best.

The problems facing Scotland’s students aren’t going anywhere, however. As NUS Scotland revealed today, 71 per cent of student renters throughout the country are worried about their ability to pay rent, while a full quarter of that number have been unable to do so during the pandemic. One in seven, in transpires, were not allowed to leave their tenancy early, despite the impact of the Coronavirus.

As the union has noted, these problems will only worsen following the most recent lockdown announcement, which has left the majority of student renters still liable to pay for accommodation they are not permitted to access until the middle of February.

NUS Scotland President Matt Crilly commented: “These survey results highlight the crucial need for intervention from the Scottish Government. As things stand, students are being expected to pay rent for accommodation they can’t use. We  continue to call on the Scottish Government to ensure urgent financial support is available so that no student is left out of pocket while following public health guidance.

“It’s also a real concern that many students feel their notice to end their tenancy would not be accepted as students have a legal right to leave their accommodation, which all landlords have a duty to uphold.

“Throughout the pandemic students have lacked the certainty they need to leave their accommodation contracts early. If students don’t need to return this semester they should be told now. Students deserve better than yet another term of uncertainty.”

This was not the first time Crilly or other student representatives have made such demands, which appear to have gained some traction in Holyrood this week. As reported in Scottish Housing News on Monday, a number of cross-party MSPs have backed calls for rent refunds from universities and accommodation providers for at least the remainder of the month, given that students will now be taught online through January and February.

In a letter sent to the chief executives of Scotland’s primary providers of private student accommodation, Scottish Labour housing spokesperson Pauline McNeill wrote: “Many (students) are concerned that they will also be required to pay rent when they need not do so as there is no current requirement for them to be on campus/in halls or because they choose not to take up their accommodation because of public health considerations. I already have one student who has reported that they must stump up 6 months rent by today.

“Given the escalation of the Public Health crisis at this point I believe it’s necessary to allow students to issue a refund for January’s rent.”

The Scottish Greens – who last year secured changes which made it possible for students to terminate their accommodation on the same terms as any other private tenancy by providing 28 days’ notice – have rightly gone further, and called upon the Scottish Government to compel universities and private accommodation providers to cancel rent for as long as students are told not to return to campus.

Even the Scottish Tories – not, most would agree, traditionally perceived as either allies of Scotland’s student sector or opponents of profiteering landlordism – have demanded that rent refunds be delivered to students “urgently”, and not “months down the line when they’re already out of pocket.”

The Scottish Government has so far responded to these demands by pleading powerlessness. According to a government spokesperson, they “have no direct role in the provision of student residential accommodation, whether that is managed by universities or private sector organisations.

“These are judgments that universities and providers have got to make in contact and consultation with their student community, and it’s right and appropriate that that is undertaken.”

Displaying their continuous and apparently impervious belief that the private rental sector can be enjoined into doing the right thing through polite, non-binding entreaties, the spokesperson continued: “We encourage accommodation providers to come to an appropriate resolution of issues around tenancy agreements and rent payments,” adding that “any student facing additional hardship as a result of Covid-19 should apply for financial support from the FE/HE Discretionary Funds.”

The general tenor of these marks was echoed by First Minister Nicola Sturgeon when the matter was put to her by Scottish Green co-leader Patrick Harvie at FMQs earlier today.

“On students, any evidence of private housing providers trying to frustrate the ability of students to exercise their legal rights – we will absolutely look into that and take whatever action is considered necessary,” Sturgeon said. “So if Patrick Harvie or others have specific instances of that, please pass them to us.” Or, to put it another way, it is seemingly the burden of others to uncover the frustration of students’ legal rights, rather than the Scottish Government’s responsibility to seek it out.

Beyond that, Sturgeon reiterated the government line that “the issue around rents for students is a matter for universities and housing providers.” Noting that some universities had offered “some kind of waiver or rebate”, she added: “I would encourage them to go further and make sure the situation students are is properly understood and properly responded to.”

If ‘understanding’ – perhaps with a side-order of peace and love – were enough to resolve the situation, and if universities and accommodation providers were willing to respond ‘properly’ to students’ ongoing predicament, none of this would be a matter for discussion.

The discussion itself shouldn’t even be necessary. Just as a renewed reinforcement of lockdown measures should have come with a simultaneous, automatic extended ban on evictions, the immediate closure of schools and all other attendant measures we know from bitter experience to be required, students should never have been placed in this position to begin with – as the students themselves need no reminding.

For all the questions raised on their behalf by those in Holyrood, Scotland’s political parties have trailed behind Scottish students on this matter, many of whom are not content to rely upon professions of sympathy from Holyrood to get the job done.

As of last week, rent strike campaigns were underway at 45 universities across the UK. In Scotland, this so far includes Dundee and Edinburgh, though there has been discussion of others also taking part. There can be no doubting the existence of a student movement, or its determination.

Nevertheless, this was – as openDemocracy’s Laurie Macfarlane pointed out in October, when many UK students first found themselves being charged rent for the privilege of taking online courses in accommodation they could not leave – an entirely foreseeable situation. The reasons why so many universities and accommodation providers have resisted providing just restitution is not difficult to figure out.

“If students had been advised to stay at home rather than move into their university accommodation, landlords would have lost billions of pounds of rent. Universities themselves are among those landlords: in the UK’s increasingly financialised higher education sector, landlordism is a vital part of the business model.” Because of this, many students were led to believe – under what could only be described as false pretences – that in-person teaching would continue, and a return to campus was required.

It was a staggering con, and if university authorities and other landlords are so complacent as to think that they can get away with it, we can only conclude it is because the Scottish Government has given them no reason to think otherwise.

To hear some high-profile voices tell it not so long ago, the radicalism of Scotland’s student movement is either much exaggerated or diminished in its present form, and ‘campus culture’ – a spectre which seems to particularly haunt who haven’t set foot on a campus in years – remains woefully preoccupied with irrelevant and performative marginalia.

And yet – almost as if a great many people were talking a great deal of crap – students have proven repeatedly to be the most articulate and militant defenders of their own material interests in the fact of unprecedented circumstances.

With luck and a little honesty, all those who seek radical change in our society might recognise that students are a potentially powerful lobby in and of themselves – albeit one that is resistant to the convenient diagnoses of those who care about them only when they are useful. A wider conversation not just about the ‘business’ of student housing, but what society owes to students – rather than vice versa – is long overdue.

In the meantime, if they are to achieve a just resolution, students throughout Scotland and the UK will need help – not just from the NUS, tenants’ unions, political parties and sympathetic organisations, but from everyone who has faced similar challenges from the predations of landlordism and the feeble shrugs of government.

UPDATE: Findings from an NUS Scotland survey released on 14 January indicate that 64 per cent of students say the Coronavirus has had some impact on their income, with around one in four having their hours reduced and one in ten having lost their job.

60 student leaders from across Scotland have now written to First Minister Nicola Sturgeon calling for increased hardship and digital funding, as well as compensation on rent, tuition fees and no detriment policies in each college and university.