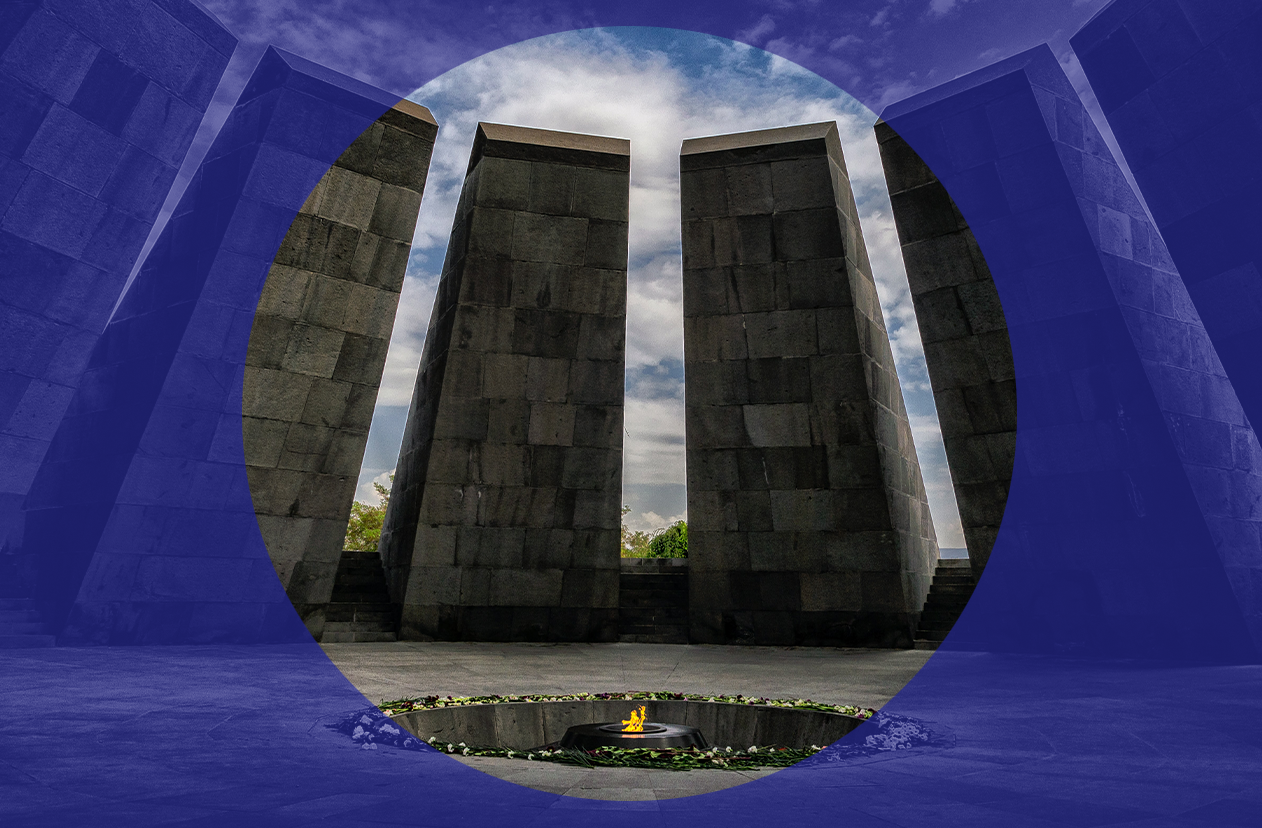 “Continuing to agitate that the genocide be recognised further challenges those who make themselves complicit in a historical crime by abetting its denial. This, for now, includes the UK Government.”

PRESIDENT JOE BIDEN recently told the truth. I am, for once, not being glib when I say that this is a pretty big deal.

Last week, Biden became the first US president in history to formally recognise the reality of the Armenian Genocide, writing in a statement: “We remember the lives of all those who died in the Ottoman-era Armenian genocide and recommit ourselves to preventing such an atrocity from every occurring again… We affirm the history. We do this not to cast blame but to ensure that what happened is never repeated.

“The American people honor all those Armenians who perished in the genocide that began 106 years ago today.”

The statement was released on 24 April, the anniversary of what would come to be known as ‘Red Sunday’, the day in 1915 when Ottoman authorities initiated a wave of arrests of Armenian intellectuals – politicians, lawyers, teachers, clergy, artists, poets – in the first official act of a new policy. The intention was to decapitate the Armenian people of any potential leadership around which resistance could rally against what was to come. Today, it is remembered as the first day of the Armenian Genocide.

In truth, it had already begun. Following the worst Ottoman defeat of the First World War due to incompetent military leadership, the Young Turk government instead blamed perfidious Armenians within their ranks, who were first transferred to labour battalions, disarmed, and systematically murdered. At the same time, Ottoman irregular forces began to perpetrate mass-killings of Armenian communities along the Russian border.

Some attempted to resist, most notably in the city of Van; perversely, such attempts at self-defence would be used by the Young Turks as a pretext for a more comprehensive policy of annihilation. From 24 April onwards, Armenian men, women and children were subject to ‘deportation’, and were marched in their thousands through the deserts and mountains of Eastern Anatolia. Many would die on the journey – of thirst, hunger, exhaustion, or at the hands of their overseers – and that was exactly the point. Those who survived these death marches would find concentration camps, starvation and execution awaiting them. By the end of the First World War, more than 90 per cent of the Empire’s Armenian population was gone.

Every so often, the academic equivalent of a sea lawyer will quibble that the events of 1915 cannot be considered a genocide, as the term did not exist at the time – a spectacularly disingenuous piece of pedantry, considering its origins. The prompt which would lead Polish lawyer Raphael Lemkin to eventually coin the word was reading about the 1921 assassination of Talat Pasha, the chief architect of the genocide. Talat’s killer – an Armenian student named Soghomon Tehlirian – knew this particular monster would never see the inside of a courtroom; suspecting the truth of this view, Lemkin asked one of his professors why no crime existed under which Talat could be charged. To put it another way, we only have the language to articulate what genocide is because of Armenia.

According to the Republic of Turkey, which would rise from the Ottoman Empire’s ashes, such articulation is the true crime. The regime of Recep Erdoğan maintains the immovable, obscene Turkish position: there was no genocide. There may, Turkey will grudgingly concede, have been some regrettable unpleasantness – responsibility for which they are keen to distribute as widely as possible – but to suggest there was a systematic attempt to eliminate the Armenian people is quite literally a criminal offence, the official charge of which is “insulting Turkishness”.

Unsurprisingly, the Turkish Government’s reaction to Biden’s announcement was as apoplectic as it always is when a foreign government resists or ignores the diplomatic pressure they routinely employ to prevent the acknowledgement of history – all the more so because this time, it came from a country that has historically avoided such recognition for reasons of expediency.

In 2007, a bill that would have seen the US Congress condemn the genocide almost passed, until the administration of George W Bush – wary of angering the country through which most of the military air supplies for the Iraq war flowed – had it killed. While a candidate for president in 2008, Barack Obama committed to recognising the genocide, but failed to do once in office, leaving two of his key aides to make a weak apology in 2018. It is fair to say that many amongst the globe-spanning Armenian diaspora were surprised when Biden bucked the trend – I was one of them.

It is difficult to say much about the Armenian part of me, because there is so little about which I can speak confidently. My Irish heritage is well documented enough that I can read whole books about it; I can still visit the places where my family grew up in Scotland, and the times in which they did so live in the collective memory of a nation – a resource which should be treasured by all. I cannot do the same with Armenia.

It is impossible to know where my great-grandmother was born, for example, or where in Armenia her family originated from, because after 1915 the map of that nation was a lot less crowded. Hundreds of towns and villages simply disappeared; they did so for the same reason that one side of my family tree becomes abruptly and mysteriously sparse.

For this among other reasons, I bow to no one in my contempt for those governments which prefer to avoid recognising what happened to Armenia. Yet I cannot give too much credit to Biden, and not merely for the reasons one might expect from a Marxist grump. Just as the UK Government’s resistance to recognising the 1915 genocide has undoubtedly been influenced by its efforts to maintain relations with Turkey, Biden’s decision follows growing US frustration with Erdoğan’s regime. It is hard to avoid the suspicion that this long-overdue development came about not because it is (and always was) the right thing to do, but because the US Government felt the consequences of doing so are now bearable, where once they were not.

I have written recently of the importance of recognising the truth of history, in part because those who would see it suppressed, rewritten or forgotten have their own motivations – and they rarely stop with the past before turning to the present. Nevertheless, I bristle at the idea that governments and leaders should be given a cookie and a pat on the head for recognising reality, particularly a century after the fact. ‘Better late than never,’ doesn’t really cut it.

More to the point, the past 106 years have demonstrated that history can live on despite the lack of an imprimatur from presidents and prime ministers. Necessary scholarship has something to do with this, though academia has just as frequently become fertile ground for genocide denialism. I am more inclined the believe that the truth of what happened to Armenia has survived through its people.

The Ottoman Empire succeeded in killing 1.5 million Armenians; it failed in its goal of eradication. As the writer William Saroyan described them, “this small tribe of unimportant people, whose wars have all been fought and lost, whose structures have crumbled, literature is unread, music is unheard, and prayers are no more uttered” lives on – both in the embattled nation whose very existence proved so intolerable to some, and the vast diaspora necessitated by the attempt to wipe it out. They care for their own history, and prove that remembrance itself is an act of defiance.

Continuing to agitate that the genocide be recognised further challenges those who make themselves complicit in a historical crime by abetting its denial. This, for now, includes the UK Government, which may feel some pressure to follow Biden’s lead, but will likely be more acutely aware of the potential consequences of doing so.

The UK is Turkey’s fifth largest investor and its second biggest export market in Europe, and as of 2020 accounts for between six and seven per cent of its total annual exports. Trade between the two nations during 2019 was worth over £18 billion last year, according to the Department of Trade. This may be the reason why, as it stands, the UK Government has a less honest approach to historical memory than Kim Kardashian.

How might this be changed? There is a long-standing assumption that governmental recognition of the Armenian Genocide comes easier in nations where Armenian expats constitute a significant demographic – in France, for instance, the Armenian community exhibits considerable political heft, and was key in seeing the French National Assembly recognise the genocide in 1998, making it the first major Western European nation to do so.

As of 2008, the Armenian Diaspora Conference estimated the Armenian community of the UK, including those who are British-born and/or of Armenian descent, to be about 18,000. As for Scotland, I personally have no solid evidence our citizens of Armenian heritage number more than two (hi Mum!). For those hoping for a UK recognition of the genocide, strength of numbers does not appear to be on our side.

And yet, the Scottish Parliament passed a motion in 2013 recognising 24 April as a day of commemoration for the victims of the Armenian Genocide. I somehow doubt any of the MSPs who voted in favour did so for fear of losing the ‘Armenian vote’.

Per their respective governments, Scotland, insomuch as it presently can, recognises the Armenian Genocide; the UK does not. Unionists who grumble about the Scottish Government pursuing an independent foreign policy outwith its devolved competencies presumably feel that Scotland would be better off following the lead – or lack thereof – from Downing Street. The rest of us can wonder: what benefits could possibly be worth bartering with history and denying the truth of what happened to Armenia?

And do we truly want to be part of a Union where governments think in such terms?