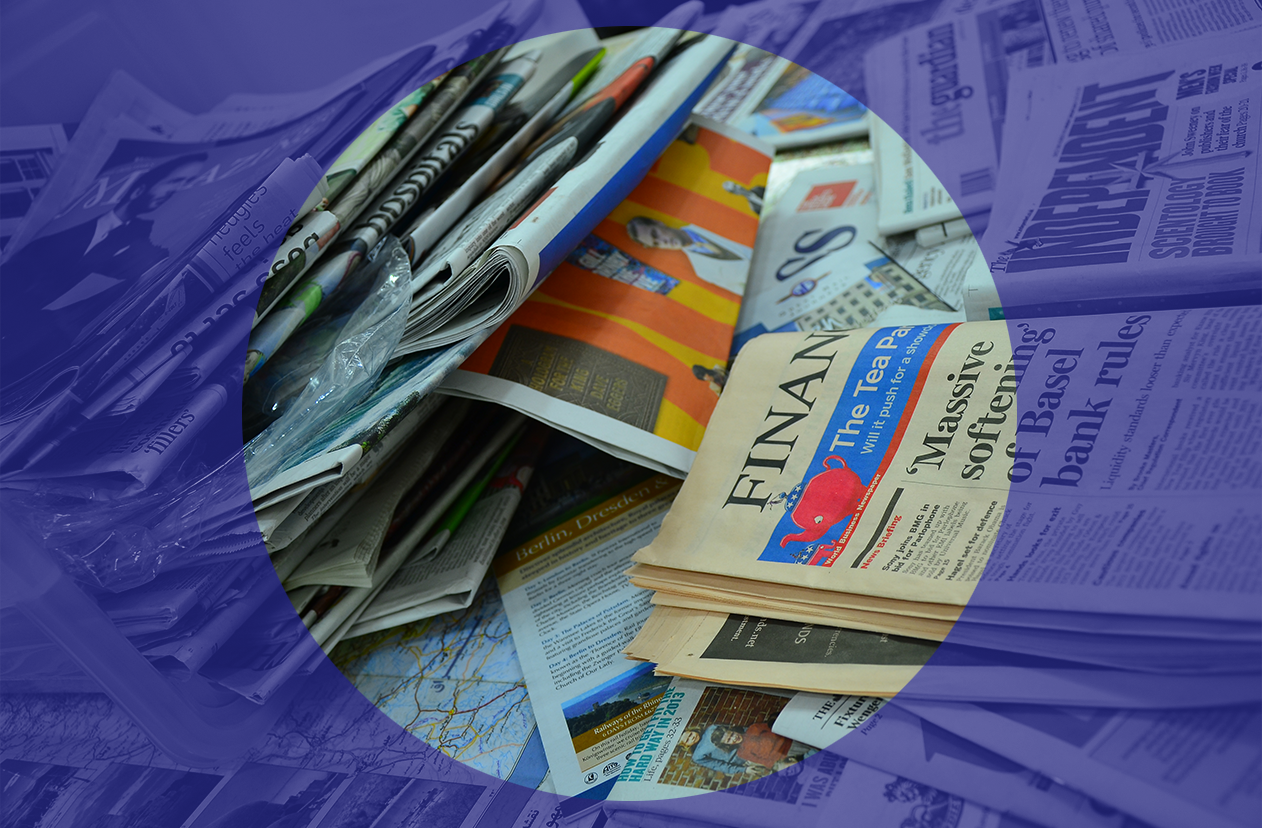 SCOTLAND’S newspaper industry is in crisis. What else is new?

The crisis was not brought about by Covid, though it was exacerbated by it. Over the course of the pandemic, physical sales have fallen precipitously and private sector advertising has collapsed. None of that should be underestimated, but neither should what preceded 2020 be forgotten.

A stress survey conducted by the National Union of Journalists Scotland in late 2019 offered a grim snapshot of life in the newspaper sector: 83 per cent of respondents believed the quality of their title had declined over the preceding year; 78 per cent said their workloads had increased over the same time-span, while 57 per cent said they had been pressured to produce work faster than they were comfortable with. Nine per cent said they had confidence in their current management.

Some may have found it bitterly ironic then that certain of the newspapers which elicited these responses also ran editorial content last week condemning the Scottish Government’s decision to end business rates relief for Scottish media organisations – though they were hardly alone in doing so.

The move, warned Scottish Newspaper Society director John McLellan, “creates an immediate crisis for Scottish journalism, and if these decisions are not reconsidered, it could leave Scotland as one of the few, if not the only, democratic European nations to effectively abandon independent news publishing.” Elsewhere, members of the Scottish Government’s short-life working group on public interest journalism wrote to both Fiona Hyslop and Kate Forbes, urging the government to extend relief for news publishers and commit to a new package of advertising support beyond the end of March.

Some speculated over the reasoning behind the government’s decision, with the Herald’s Neil Mackay suggesting that the SNP “doesn’t like the press, it doesn’t like the BBC, it doesn’t like newspapers, it doesn’t like journalism full stop.” Mackay may be right. Anyone who has ever suffered through an SNP conference media reception – at which everyone in Scottish political journalism who dislikes each other is put in the same room, then given free alcohol – might wonder if such gatherings were dreamt up as a very specific method of torture. However, the point is moot: I struggle to think of any party represented in Holyrood that gives much indication of ‘liking’ journalism, except when it proves useful to them.

A less cynical soul than I might have got a different impression from last Wednesday’s Scottish Parliament debate on the matter, at which many opposition MSPs aimed to outdo each other in their performative devotion to the necessity of a free and healthy press.

Conservative MSP Maurice Golden urged the chamber to consider the 3,000 people directly employed by the Scottish newspaper sector. “It is the number of people,” Golden said, “who face a direct threat to their jobs and will be worried about how they will support themselves and their families.”

Indeed. If left unemployed, they would have little to rely upon other than the Tories’ own Universal Credit – a disturbing thought for anyone. Where, one might ask, was this concern for journalists’ employment between 2007 and 2019, when according to the Cairncross Review, the number of full-time, front-line journalists working in the UK fell from 23,000 to 17,000?

While opposition MSPs successfully outvoted the SNP in calling for 100 per cent rates relief to be extended during 2021/22, the vote is non-binding. It may be cold comfort, but the debate did at least highlight a few things which are worth bearing in mind.

Foremost was the importance – and plight – of Scotland’s local papers. “Few of our local titles are now printed locally,” said Labour’s Colin Smyth. “And given the shedding of jobs, the small teams left at many of our local papers are performing miracles to keep stories flowing week in, week out.” While John McLellan may shudder at the thought of “a Press shattered into a thousand little local pieces”, the failure of Scotland’s national newspapers to provide adequate coverage of Scotland’s many and diverse communities renders such localism all the more necessary.

Public Finance Minister Ivan McKee, despite arguing unsuccessfully for an amendment which would make extending rates belief a part of the ongoing budget process, also raised a valid point – one which was carefully overlooked by the majority of those who had spent the week thus far fulminating on behalf of Scotland’s embattled newspapers.

“I note,” McKee commented, “that the NUJ has called for support to go only to employers that are investing in their productions and not to those that are making redundancies, cutting pay, curtailing front-line journalistic roles, paying executive bonuses or blocking trade union organisation.”

For those working within the Scottish newspaper sector, this cut to the heart of the matter: should their employers be granted rates relief, what guarantee did they have that the trends which have defined the industry for the better part of this century – ever-dwindling budgets and salaries, compulsory redundancies, the end of any of notion of job security – would not continue? If our government cannot impose such conditions, who can?

Funnily enough, amongst the various paeans to the importance of local press offered by Conservative MSPs last week, not one of them made any mention of the NUJ. One can understand why: voicing support for businesses endangered by the pandemic is comfortable territory for Scottish Tories; extending that support to a trade union – a union which has been the most stalwart defender of the workers upon whom these newspapers rely – would seem to be a step too far.

McKee raised this point to argue that blanket rates relief would not meet the NUJ’s criteria for protecting journalism. The Scottish Government’s sudden concern for working conditions within the Scottish media would be touching, were it not so suspiciously abrupt.

Scottish Green co-leader Patrick Harvie put it more plainly: “I find that interesting,” he observed dryly, “because it is frustrating that the Scottish Government, in its wider approach on domestic rates and the relief packages that are available during the pandemic, has not chosen to target very much; it could take a much more targeted approach to the business support packages that it is making available, but it is not. It seems to be using that argument only in relation to this specific issue, which strikes me as odd… If the Scottish Government came forward with a targeted approach that specifically made sure that smaller independent titles, for example, gained the benefit that they need, that would be entirely consistent with the motion.”

Addressing the immediate question of rates relief, Harvie’s point was well-made. Yet the fact remains, as much as some prefer to pretend otherwise: in order to care about journalism, one must care about journalists. That care must be demonstrated through advocacy, organisation and a clear articulation of what will and will not be tolerated.

Unfortunately, as an industry there appears to be no limit to our tolerance. Asking those trying to break into the profession to tolerate endless unpaid internships and ‘work experience’, while demanding professionals tackle impossible workloads for miserable, unliveable salaries is both repugnant and very much the industry standard. These practices, as much as the capriciousness of the Scottish Government, threaten the future of our free press.

Nevertheless, we are told, this is the way things are now. True, grizzled elders – people who remember the ‘90s – may spin strange tales of an age undreamed of, when careers in journalism were not inherently linked to precarity, but such days of high adventure are long since past.

As Megan Greenwell wrote in Deadspin – shortly before that digital media outlet fell prey to the very phenomena she identified – “a metastasizing swath of media is controlled by private-equity vultures and capricious billionaires and other people who genuinely believe that they are rich because they are smart and smart because they are rich, and that anyone less rich is by definition less smart. They know what they know, and they don’t need to know anything else.”

None of this should let the Scottish Government, or anyone else, off the hook. The sorry state of the journalistic landscape did not happen by accident, and challenging it requires intent and strength of purpose. We have no shortage of SNP politicians who have condemned the ‘gig economy’, backed campaigns such as the Real Living Wage and demanded employers be held to a higher standard; there are multiple ways such concerns could be turned towards our media. Ministers may even taken some dark satisfaction in making newspaper proprietors squirm, whilst simultaneously doing some actual good for Scottish journalism.

Doing so, however, will require a plan – fortunately, we already have one. The NUJ’s News Recovery Plan for the UK and Ireland was launched last April. In the ten months since, the fact that it has not been a larger part of the conversation should shame both politicians and the media organisations whose recovery and reform it would aid.

The NUJ’s recovery plan is both credible and necessary. Its funding would come from a windfall tax of six per cent on the tech giants, coupled with tax credits and interest-free loans to support journalism jobs, with particular focus upon frontline reporters covering the Covid-19 crisis and recovery. Free vouchers for online or print subscriptions would be provided to all 18 and 19-year-olds, while tax credits would be given to households with subscriptions.

Longer term, the NUJ’s goals include the establishment of a government-funded Journalism Foundation, as recommended by the Cairncross Review, to invest in local news and innovative journalistic projects. ‘Asset of community value’ status – as enjoyed by community pubs – would be conferred upon local titles, allowing them to be preserved for potential community ownership. Tax breaks, rate relief and other means of financial support could further help social enterprises and cooperatives take over titles from the major regional operators which have proven such poor protectors of local papers.

Public funding would be contingent upon an employee representation of 25 per cent on executive boards, media ownership rules would be reformed, while support would be given to nationwide media literacy, whistleblower protections, and a global framework for protecting and promoting journalism and press freedom. Working alongside the International Federation of Journalists and sister unions, the NUJ was not overstating their case when it called for “a global recalibration of the media industry.”

Many of these initiatives will, under the present constitutional arrangement, need to be approached from the UK level – a fact that does not give much cause for optimism, given that our current prime minister is a semi-retired yet staggeringly overpaid columnist who wouldn’t recognise journalistic solidarity if it smacked him upside the head with a copy of the Telegraph. In light of this, it makes sense that many have focused upon rates relief, which is something the Scottish Government does have control over. Still, one requires no devolved power or fiscal autonomy to widen the conversation, or fully recognise the problems facing our national press – what caused them, and what needs to be done about it.

They know what they’re talking about. When they talk, we should listen.