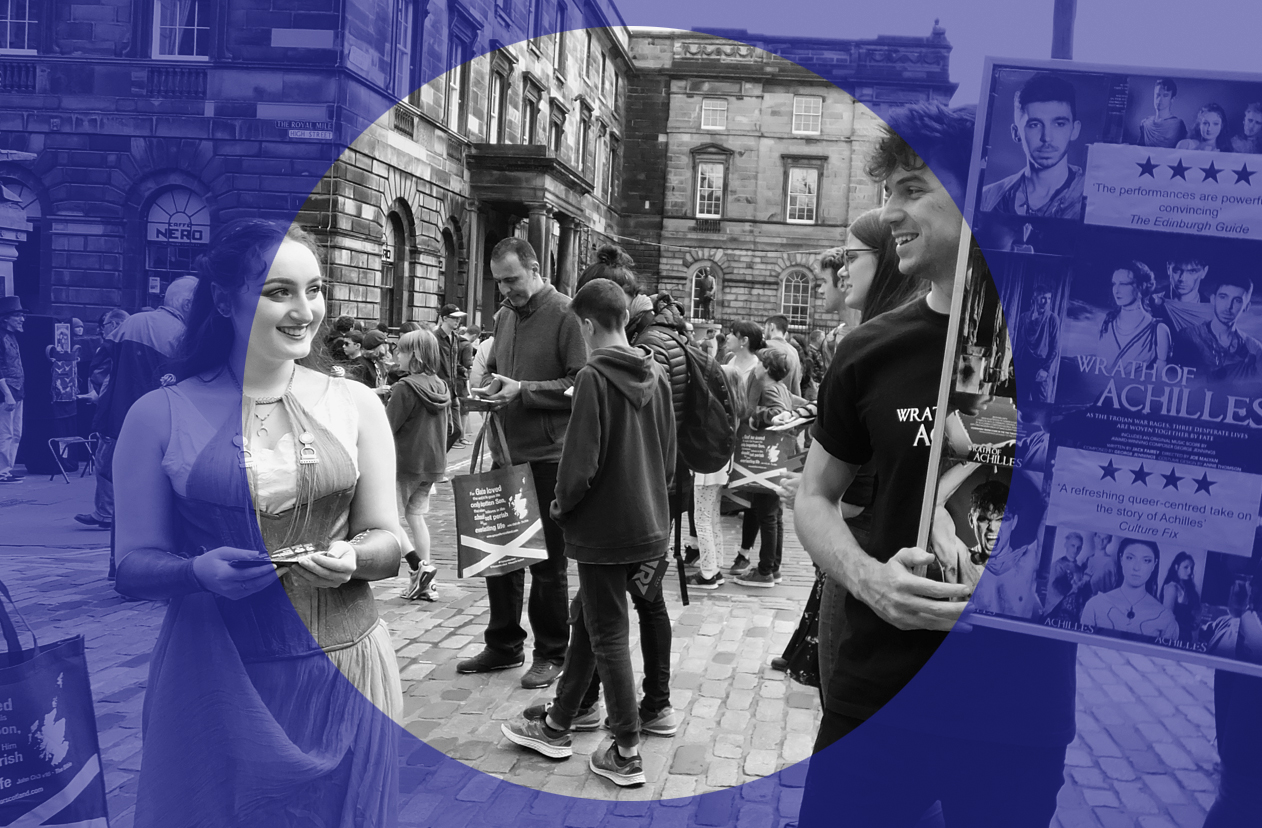 “If the festivals return to business as usual in 2021, complete with the same bad bosses, lousy wages and illegal working practices, with corners cut and conditions worsened in a mad drive for profit to make up for the losses faced this year, all efforts made to help them now will ring hollow.”

IT DOES not take expert knowledge of the Edinburgh Fringe to know why the city’s traditional summer festivals would have been an almost incalculable risk during the Covid-19 crisis.

Even at times when there is not a global pandemic, Scotland’s capital becomes a kind of internationalist petri dish during August – the near-inevitable consequence being what regular festival-goers call ‘Fringe flu’, which is what happens when you bring hundreds of thousands of people from all over the planet, cram them into overheated confined spaces, then let them cough on each other. One does not need to be an epidemiologist to figure out that cancelling this year’s events was the only sane option.

However, the prospect of Edinburgh going without the arts festival that has become the biggest in the world has been met with understandable anguish by those who populate it. As Megan Lewicki, an American producer and artist behind a number of successful Fringe productions, told me earlier this week: “This comes as a huge blow to the international arts community that relies on these festivals to promote their work. The Edinburgh Festival Fringe has especially become a rite of passage for many, for both artistic and professional development.

“However, this pandemic has been devastating. Currently the United States has the highest number of confirmed cases and it’s still rising. It seems terribly irresponsible to plan, even promote, international travel when the economy and the country’s citizens have been sorely impacted. While gut wrenching, cancelling these festivals is the right decision.”

Lewicki’s opinion is broadly representative of most performers, professionals, venues and businesses which would otherwise have taken part in the festival season – as saddened as they are, no one really questions the sense of the decision. While some hold onto to the vanishingly slim hope that a relaxation of quarantine restrictions might see some last-minute productions return, managing the disaster at hand is the question of the hour.

The financial impact of this year’s cancellation should not be underestimated: according to a recent report from the Centre for Economics and Business Research, the collective revenue produced by the festival season amounts to over £1 billion a year – equivalent to somewhere between a third and a half of Edinburgh’s gross value added for the month of August.

The UK and Scottish governments are reportedly engaged in urgent discussions with Edinburgh council officials and senior festival staff to secure the “cultural bedrock” of the city and put in place financial support for the five main festival organisations. A council paper passed shortly before the cancellation was made official on Tuesday confirmed that negotiations are also underway to pay what The Times refers to as “experienced” festival staff, in order to keep their respective organisations running throughout the shutdown.

However, it so far remains to be seen if this taxpayer money will in any way reimburse those festival workers who have already suffered a loss of income due to the cancellation.

As Emily Robinson, an employee of Edinburgh’s Summerhall venue told Source: “The cancellation of the Fringe means that hundreds of precarious workers like me will go without a significant sum of money that we budget for each year.

“Major Festival producers such as Underbelly, Gilded Balloon and the Pleasance rely on our labour – often paying less than the legal minimum wage and providing substandard working conditions – to extract millions of pounds in profit that does no get reinvested back into our city.

“Now that the Fringe Society has pulled out of the Fringe, it’s absolutely critical that major producers don’t abandon the workers who make them their millions of pounds of profit.”

Some contend that now is not the time for such concerns. Writing in The National, Shona Craven, while acknowledging that a year without the festivals will “offer a chance for reflection about size and sustainability, prices and pay-offs, expertise and exploitation,” nevertheless argues “it’s far too early to speculate about what 2021 will bring.”

On the contrary: Edinburgh, the international arts community that looks toward it each summer, and most crucially the workers who have slaved and suffered for their benefit quite literally cannot afford to wait and see what will come.

The problems of the Edinburgh festivals, the Fringe chief among them, existed long before Covid-19, and thanks to efforts of the redoubtable Fair Fringe campaign, they have become impossible to ignore. The shutdown must not be used as another excuse to overlook these issues, but rather a chance to take long-delayed action.

Before a global pandemic upended the situation, festival grandees weren’t shy about telling us that significant reform was not only impossible, but undesirable. In August last year, Edinburgh Comedy Awards boss Nica Burns rejected calls for greater regulation of working conditions for festival workers with the risible rallying cry “Hands off our Fringe!” A few months before that, Fringe Society chief executive Shona McCarthy warned that attempts to secure a fair wage for all festival employees were not “the right approach”, condemning campaigners for “vilifying individual operators without actually understanding the whole landscape.”

Such context does not inspire much faith that these are the kind of people to hammer out an equitable solution to the festivals’ current crisis. Still, ignore precedent for a moment and take McCarthy at her word: the shutdown has now forced the major festival organisations to do exactly what she once demanded of the Fair Fringe campaign: contemplate the whole landscape, from top to bottom, and decide what aid can and should be given. If only those at the top are saved by the measures currently being considered, while this year’s unavoidable losses are paid for by those on the bottom rung, someone is going to have to explain why.

Beyond the dubious working conditions of many festival workers, another major concern in recent years has been the impact of the festivals’ unending growth upon Edinburgh itself. Speaking in The Edinburgh News today, the influential London theatre PR Kevin Wilson observes, not incorrectly, that festival venues “appear happiest opening more new sites each year, and the University [of Edinburgh] are happy to coin in a massive income from venue hire and the bars, but what role should the city council playing in the future of the Fringe? Perhaps this enforced shutdown will give time for some level-headed thinking.”

A not unreasonable desire on the face of it, but Edinburgh City Council – as cash-strapped as many other local authorities across Scotland – rarely turns down the opportunity for fresh financial injections (except, mysteriously, when Hollywood rolls into town).

Further cynicism may be warranted by Wilson’s proposal that venues and the Fringe Society “should listen to locals”, and that the Fringe should only continue with their consent. Edinburgh, just like the rest of the country, is undoubtedly in desperate need of a more participatory form of local democracy, but should opinions on the festivals’ future be sought from the community that hosts it, it’s worth asking if they will all be given equal weight.

It is difficult to imagine, for example, many calls for reform coming from the city’s vampiric private rental sector, which exploits the thousands who flood Edinburgh each August in need of temporary accommodation to elicit the kind of profit margins that would make a heroin cartel blush. Similarly, the local businesses Wilson identifies as the chief profiteers of the festival season will likely bristle at any further threats to their bottom line.

As recently demonstrated the Scottish Government’s embarrassing hesitancy in taking the steps needed to protect the nation’s tenants from the economic consequences of the Coronavirus – or the predatory landlords who would inflict them – it is rare for public opinion to be weighed in Scotland without the thumb of powerful lobbies on the scale.

A sense of priority is therefore required – one which should inform every effort being made to sustain Edinburgh’s festivals beyond these months of self-isolation and guarantee their future. For once, the needs of the festivals’ underclass should be put first, from the low-paid, badly-treated workers on whose backs the whole edifice functions, to the poorest and less well-known artists and performers from across the world, to the citizens whose hopes for their own city always come second to a nebulous ‘business community’ whose profits do not trickle down on all of Edinburgh alike.

If the festivals return to business as usual in 2021, complete with the same bad bosses, lousy wages and illegal working practices, with corners cut and conditions worsened in a mad drive for profit to make up for the losses faced this year, all efforts made to help them now will ring hollow. By the same token, if ticket prices rise across the board to make up the shortfall, or if efforts to bring the festivals’ expansion under control lead to a weeding out of new and experimental talent in favour of celebrities and West End-style productions, then Edinburgh will have betrayed itself, and told the world that art and culture belong only to those who can afford it.

In their prior efforts to resist enforcing standards of fair pay and improved conditions for their workers, festival bosses are fond of reminding us that such events are about more than money. As financial relief is being negotiated for their stricken organisations, they now have a chance to prove it. If they are so committed to the idea that monetary remuneration is a vulgar distraction from this labour of love, then let them make the sacrifices necessary to help those hurt most by this year’s missing festivals.

As a native of Edinburgh, as a Fringe critic of eight years’ standing, and as someone who feels my city’s cultural centrepieces can be a force for good in this country and this world, I believe that the festivals should be saved. But they must also be worthy of salvation.