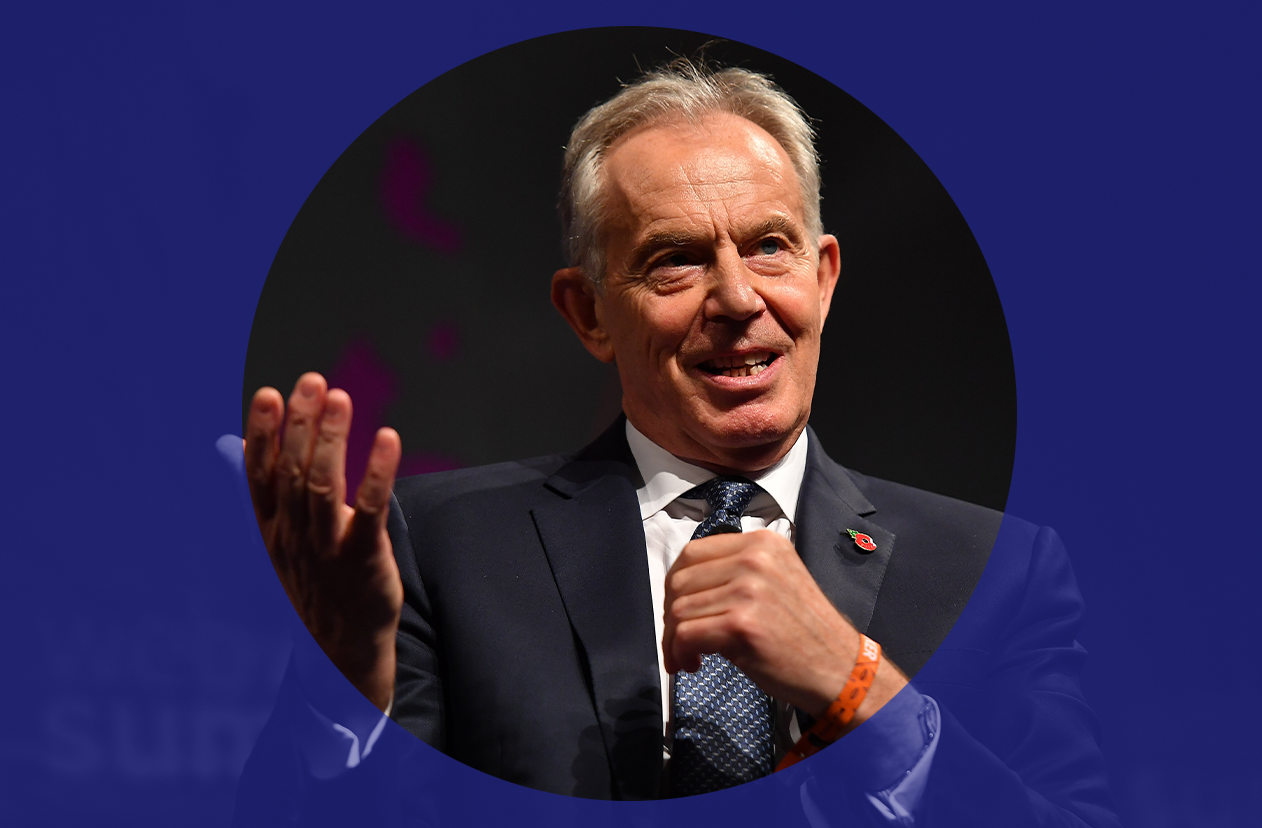 “You can ignore certain names when they appear in the headlines and endeavour to forget about them – a prospect Blair should welcome, but obviously fears – or you can remember that when Blair speaks, he does so from atop a mountain of corpses.”

TONY BLAIR – former prime minister, war criminal and, it now seems, the scourge of Carpathia – resurfaced over the past week to offer a few choice opinions. I don’t know why either.

In an interview with ITV News last night (27 April), Blair addressed the potential implications of next week’s Holyrood election, arguing: “I’m not sure that, even if the SNP wins a majority in the Scottish Parliament, people want to go through the disruption of an independence campaign – I would frankly doubt it.” What qualifies the former Labour leader to offer this insight into the minds of Scottish voters went carefully unexplained.

Blair defended the advent of Scottish devolution which he oversaw, but acknowledged it was perhaps wrong to assume that devolution “would end the argument of independence” – hindsight is a wonderful thing – and that not enough was done “to build real cultural ties and emphasise the enormous things that the different countries in the United Kingdom have in common.” Maybe he should have built some kind of ‘Union Dome’ – that would’ve done the trick.

All in all, it was pretty weak sauce. Commenting on Twitter, Green MSP Ross Greer noted that as someone “passionately committed to independence”, he was “strongly in favour of Tony Blair regularly telling Scottish voters that they shouldn’t get what they vote for. Each intervention is surely worth another percentage point for Yes.” From your lips to God’s ears, Ross. But in the meantime, what have we learned? That Tony Blair is a unionist with a dim view of democracy? Try to contain your shock.

Those of us who experience involuntary twitches and throbbing forehead veins every time we remember Blair exists – who have carried the kind of anger that smoulders like burning peat from an adolescence marked by anti-war walkouts to the precipice of middle-age – may be aware that ol’ Tone stages these unsolicited ‘interventions’ with some regularity – notably over Brexit and the Labour leadership of Jeremy Corbyn, both of which he treated as crises of equal measure, and both of which he failed miserably to make a dent in.

The last one I remember was a speech in Edinburgh in 2019, where he overcame his infamous dislike for the Scottish media – “unreconstructed wankers”, if you please – to opine on devolution and the future of the Union before the Scottish Parliamentary Journalists’ Association. His speech was particularly telling, in that it was attended by seemingly every high-profile hack in the country and was roundly ignored by pretty much everyone else. It featured exactly what one would expect – Brexit is bad, no deals should be offered for a second independence referendum, retail politics is king. Then as now, Blair had nothing new, interesting or worthwhile to say.

So, given that his periodic interjections have had such negligible impact, why pay him any heed at all? And why does he feel the need to make them?

On balance, Blair has reason to be cheerful – the Labour Party under Keir Starmer is one that he will recognise and find largely unobjectionable; similarly-minded centrist governments hold power in France and the US; the money and make-work jobs will not be running out any time soon; and of course, he remains unfamiliar with the inside of a cell at the Hague. Some would be happy enough to get away with it all.

Indeed, Blair’s legacy endures even in places he might not choose to recognise. It has long been a source of frustration to some on the Scottish Left that the current SNP leadership’s fondness for key Blairite tropes – a neoliberal economic prospectus, an obsession with spin, etc – has failed to taint them with the stink that accompanies the former PM. There are a number of reasons for this, but chief among them is probably the small matter of Blair having fomented and pursued an illegal war, the repercussions of which endure to this day.

People have not forgotten this, which is why history – with which Blair once presumed such an intimate relationship – has not absolved him, and why the SNP is still capable of getting some political mileage out of its now-vintage anti-war stance (something the modern party leadership should bear in mind whenever the tawdry Atlanticism of Stewart McDonald and the like is indulged).

Even those in Labour who carry on the tradition he personified prefer not to say so. Anas Sarwar once described his characterisation by critics as a Blairite to be “laughable”, though he appears to be the only one laughing. True, Sarwar has in the past criticised some of the Blair government’s more contentious policies, and has shown a laudable commitment to tackling Islamophobia (never the most popular priority amongst the Labour Right, whether under Blair or Corbyn), but no one would confuse him for a placard-wielding socialist. Instead, Sarwar prefers to identify as a ‘Brownite’, perpetuating the delusion that there was some vast ideological gulf between Gordon Brown and Blair, and confirming that there is nothing to lost by dissociating oneself with the latter.

All of this might help explain why Blair refuses to stay quiet and simply be satisfied with being a) unincarcerated and b) very, very rich. However, his efforts thus far have yielded few positive results.

The lack of success Blair has had in reversing the decline of his decayed public profile is all the more noticeable when compared to other old monsters who’ve attempted the same trick. As the late Anthony Bourdain once wrote, “Once you’ve been to Cambodia, you’ll never stop wanting to beat Henry Kissinger to death with your bare hands.” And yet the vampirically enduring architect of atrocity remains a revered elder statesman, untroubled by anything except possible haunting by the ghost of Victor Jara.

Even more notable has been the reappearance this month of Blair’s comrade-in-arms from the War on Terror, former US President George W. Bush, currently on a press tour promoting a book of his execrable paintings. Oddly enough, this erstwhile malaprop-addicted, neo-imperialist stumblebum has managed to reform his own image with considerably more skill than his old buddy Tony.

This has much to do with the fact that Bush, in recent years, has made himself useful to liberals and far-sighted Republicans alike as a point of contrast with Donald Trump – the cuddy ‘compassionate conservative’ grandpa who suddenly looked so good, to certain eyes, in comparison with the uncouth vulgarian who nevertheless continued much of Dubya’s work.

That Bush has largely pulled off this con only reinforces the need to remember his many crimes. As New York magazine’s Sarah Jones wrote recently: “We decide what we tolerate, and a society that let’s George W. Bush go anywhere without a shrieking chorus to remind him of his body count isn’t good for much at all.” This applies in equal measure to Tony Blair, even if he hasn’t made himself useful to anyone.

Scottish politics has seen some debate recently over whether it is appropriate for certain people to re-enter the public sphere, as if we have any say in the matter. Such things, along with many others, are beyond our control. You can blame the media – I wouldn’t blame you – for standing by, always at the ready provide the oxygen of publicity to those we’d prefer to see the back of, but you are nevertheless left with two options. You can ignore certain names when they appear in the headlines and endeavour to forget about them – a prospect Blair should welcome, but obviously fears – or you can remember that when Blair speaks, he does so from atop a mountain of corpses. That distinction, regardless of what he may or may not have said behind closed doors, applies to Boris Johnson as well.

People – for lack of a better term – like Blair, Bush and Johnson deserve more of a reckoning than that, but pessimism about whether they will ever face it infects even their most ardent opponents. Remembering what they did and what they are is the least – and, in many cases, the most – that we can do.

When Tony Blair appeared on our TV screens and Twitter feeds this week, many saw not a statesman or a grandee, respected and distinguished, but a joke. The problem is: he’s not funny.