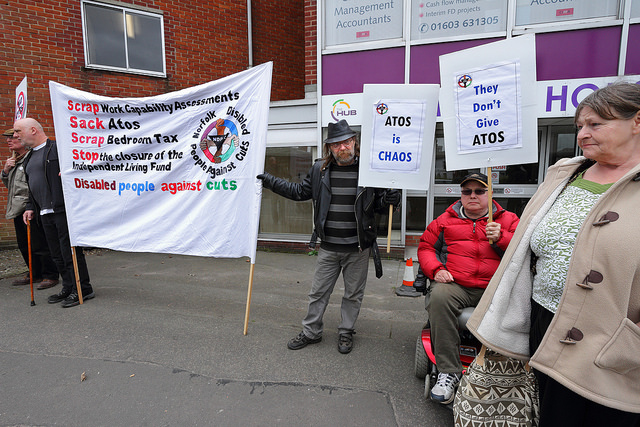 Sean Cudden, Masters student and welfare rights activist, summarises the key findings of his research on what users of the benefits system in Scotland think about it. That research has informed our series on One Person’s Journey Through the Benefits System.

Fear is associated with various aspects of the benefits system which have either been introduced since 2010, such as the ‘Bedroom Tax’, or have been reformed, like the Work Capability Assessments (WCA).

The ‘Bedroom Tax’ has remained a significant concern for benefit claimants despite it being mitigated in Scotland. This policy caused enormous concern for claimants in social housing, and although designed as an under-occupancy penalty for social housing residents, they felt they had little option but to pay it because there is a lack of social housing of a suitable size to move to.

READ MORE: One person’s journey through the benefits system: Part 1 of 3

As David, a carer for his disabled partner, pointed out ironically: “That one really affected us directly because obviously you can quite easily just at the drop of a hat move into a smaller house.”

Another widely felt source of fear is the assessment regime that is part of the process of applying for and maintaining entitlement to benefits. Raymond, who is blind, argued that the WCA regime is “unworkable”.

“I mean like that decision maker saying there’s no evidence my eyesight [is bad] but for the last 28 years I’ve had piles and piles of consultants letters.”

David found that the home-based assessments took a great toll on his partner, who suffers from anxiety, saying they “wiped him out for days afterwards … his mood was so low afterwards. He found it unnecessarily tortuous and stressful.”

David also commented on those carrying out the assessments, who he said were “very nice and polite and very untrained”, but it was the stressful nature of the process which resonated most strongly with the other study participants.

READ MORE: ‘So why haven’t you killed yourself?’: One person’s journey through the benefits system Part 2 of 3

Raymond talked about the “revolving door of being assessed” causing mental stress and panic attacks and Anne referred to the process as degrading and a “hostile environment.”

The participants were also fearful of being “migrated” onto Universal Credit. Raymond stated that Esther McVey, then Secretary of State for Work and Pensions, claimed the government were helping people through Universal Credit when they were actually taking money away from people. Anne described Universal Credit as a “car crash coming towards me”. The fear of Universal Credit was largely based on it being set at a lower rate than previous benefits for disabled people.

Technical or administrative problems with the benefits system were also of concern for participants in the study. These ranged from the training or competence of those working within the system to what the participants saw as the overly bureaucratic nature of the system.

As David put it while discussing Personal Independence Payments (PIP): “I don’t believe for a second that PIP was designed to enable people. It’s designed to restrict the amount of claimants.”

David insisted that had he not been able to help his partner, who suffers from severe anxiety, with the PIP application: “If it was just him he’d never have applied for it, because he would have found it too overwhelming. And I think it’s designed like that.”

READ MORE: ‘If it weren’t for bedroom tax mitigation they’d be trying to evict me’

Even contacting the DWP is potentially stressful. So much so that Raymond left that to his MP when he had any problems because “trying to get through to these people; it’s a nightmare.” David saw the same issue as further proof of purposeful malignancy in the design of the system.

“[I]t should be a very simple process. The reason it’s not is because the process isn’t designed to help people, it’s designed so they can reduce the benefits bill. And the more complex they make something to apply for the more people will be put off applying.”

All participants in the study felt that negotiating the system was stressful and had even exacerbated their health problems. Claimants can feel powerless in the system and this is exemplified by the “claimant commitment” that has to be signed for Universal Credit as well as Job Seekers Allowance.

As a Policy Officer for Citizens Advice Scotland commented: “[I]t’s supposed to be agreed by the work coach … and the person. But you tend to find there’s a lot of people who don’t necessarily feel that they can influence the content of that.”

The last of the negative themes to emerge from the study is ‘stigma’. Media portrayals of disabled people and the language used by both media and politicians came in for criticism from the participants, with one drawing a parallel between the way disabled benefits claimants are stigmatised now with the way disabled people in Nazi Germany were described as “useless eaters”.

READ MORE: Hilary Long: The UN’s findings on poverty in the UK reveal the rotten heart of Tory Britain

“The implication is that people are just faking it … And Adam always felt they don’t believe him, they think he’s lying…that he’s making it up.”

The more positive themes in the research start with ‘support’. This refers to both a negative lack of support from the benefits system and the resultant search for support elsewhere. The participants felt like the starting point for a benefits application now is one of not believing the claimant is actually disabled and setting out to trip them up.

In response to this lack of support claimants turn to MPs and MSPs as well as financial and welfare advice organisations like Money Matters and Citizens Advice Scotland. Some claimants find strength in fighting back against a system they see as harmful to them.

Anne, for example, found support from protestors when she was leaving an assessment, having decided to commit suicide after the assessor asked her why she hadn’t killed herself yet. One other form of support that was important to participants was familial support.

David talked about the need for disabled and chronically ill claimants to have such support: “I just hope it changes because it does have a horrific effect on people … I think every claimant has to have … somebody hardened like myself that will defend them from the system. Now the system is what should be defending them, it shouldn’t need someone to defend them against the system.”

Anne argued that the mitigation of the ‘Bedroom Tax’ provided by the Scottish Government had been hugely important for her and saved her from going into rent arrears and debt. A Policy officer for the Child Poverty Action Group concurred that there had been some positive changes in Scotland: “Scottish devolved powers have offset some problems and they have a commitment to human rights which is a positive.”

READ MORE: Neil McLeod: Want proof austerity is about putting the poor in their place? Look at the benefits appeals system

Overall participants are happy with the changes that have been made so far and with the general ethos of the Scottish approach, but this is tempered by the knowledge that most of the power to shape the benefits system still resides at Westminster and by the concern that the two different approaches are not compatible.

The final theme in the research is ‘improvements’. None of the participants were happy with the new shape of the benefits system that has developed over the past few years but if a complete overhaul isn’t possible or likely in the near future, they still felt there were smaller changes that could be made in the short-term.

Raymond argued that the Scottish Government could spend more to mitigate the worst elements of the benefits system. This had been done with the ‘Bedroom Tax’ so why not for the loss of benefits some disabled people faced with the introduction of Personal Independence Payments and Universal Credit?

David argued that accessing the system and contacting the DWP with queries were processes which could be simplified. He argued that, in the 21st century, having to write a letter or spend an hour in a phone queue to contact the DWP didn’t make sense, and proposed a system using messaging or even emails.

The issue that seemed to have the most consensus on a need for change was the assessment process. A policy officer at Citizens Advice Scotland criticised the quality and accuracy of the PIP assessments, pointing out that the decisions were often incorrect which can be a very “stressful experience for people undergoing them”.

Raymond said he preferred the old Personal Capability Assessments and felt that the new system is designed to trip people up: “I just find it does not work for the claimant…the Work Capability Assessment’s a case of: ‘you don’t have a disability’. That’s the feeling I get.”

Raymond and the other participants also felt that the medical history of the claimant and the advice of their doctors and consultants should weigh far more heavily in the process which would allow for a reduction in the number and/or importance of assessments which would also reduce the stress and anxiety they cause. This is especially important because the assessors are likely to have little or no understanding of the, often complex, medical conditions claimants have.

The massive changes to the benefits system since 2010 have undoubtedly had an impact on the health and well-being of some benefits claimants. Fear seems to have become the organising principle of the new system and some disabled and chronically ill people claiming benefits have been put through an enormously stressful experience by a system that starts from a position of not believing claimants are actually disabled, a system that has as its main aim pushing people off of benefits rather than providing them with support.