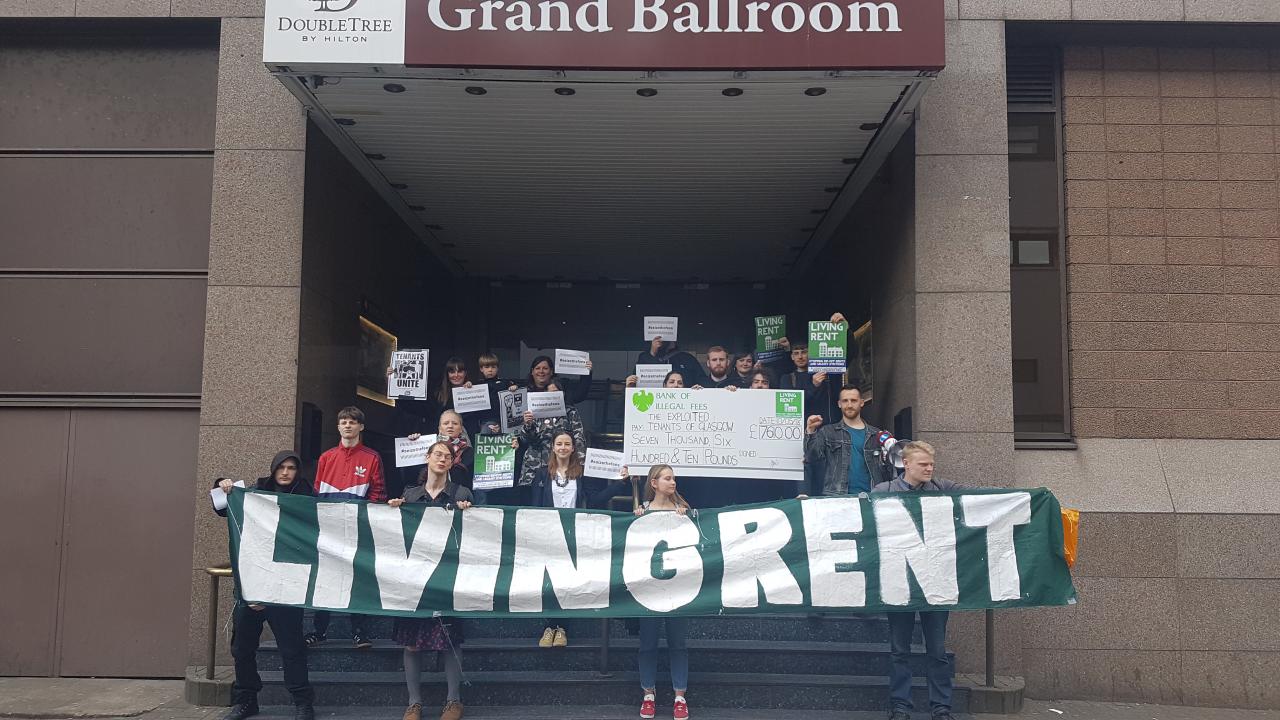 THE TENANTS’ union Living Rent has today (10 May) launched a campaign to bring an end to illegal fees being charged to private tenants by letting agents in Scotland.

To raise awareness of the issue, campaigners occupied a Scottish Association of Landlords (SAL) conference on Thursday, where letting agents were receiving training on recent legal changes around the new ‘private residential tenancy’.

In Scotland, it became illegal in 2012 for letting agents to charge fees, ensuring that tenants should only need to pay the cost of rent and deposits. 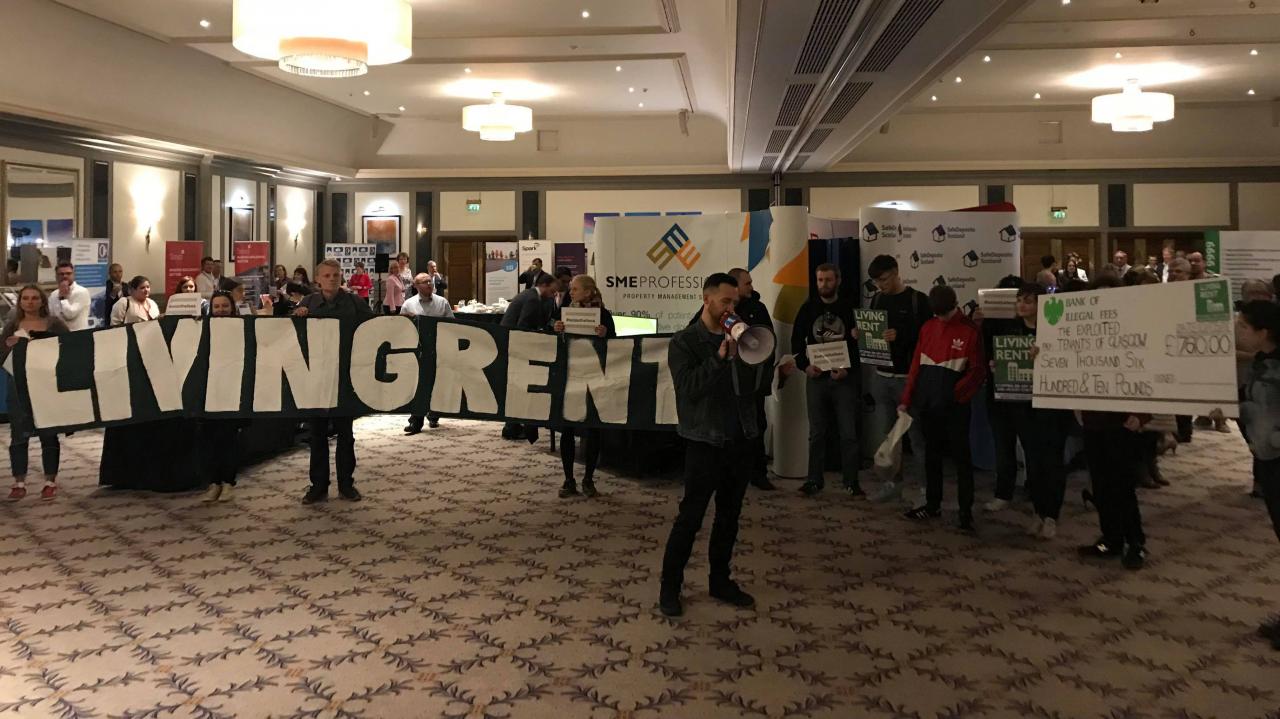 However, a survey conducted by Living Rent has so far indicated that 29 letting agents across Glasgow have been charging fees at an average cost of £129 per prospective tenant.

The most common of these were administration fees, credit check fees and reference check fees, with others citing guarantor fees, holding fees, and processing fees, all of which are illegal.

Living Rent spokesperson Craig Paterson said: “Since we launched the tenants’ union in Glasgow we have been dealing with case after case of tenants being charged illegal fees.

“Letting agents up and down the country are flouting the law and raking in hundreds of thousands of pounds from hard pressed tenants.

“The problem is widespread, with some agents trying to use companies in England to circumvent the law. Our message to all the letting agents out there charging illegal fees is simple, stop this practice now or find us outside your shop letting the public know you’re breaking the law.” 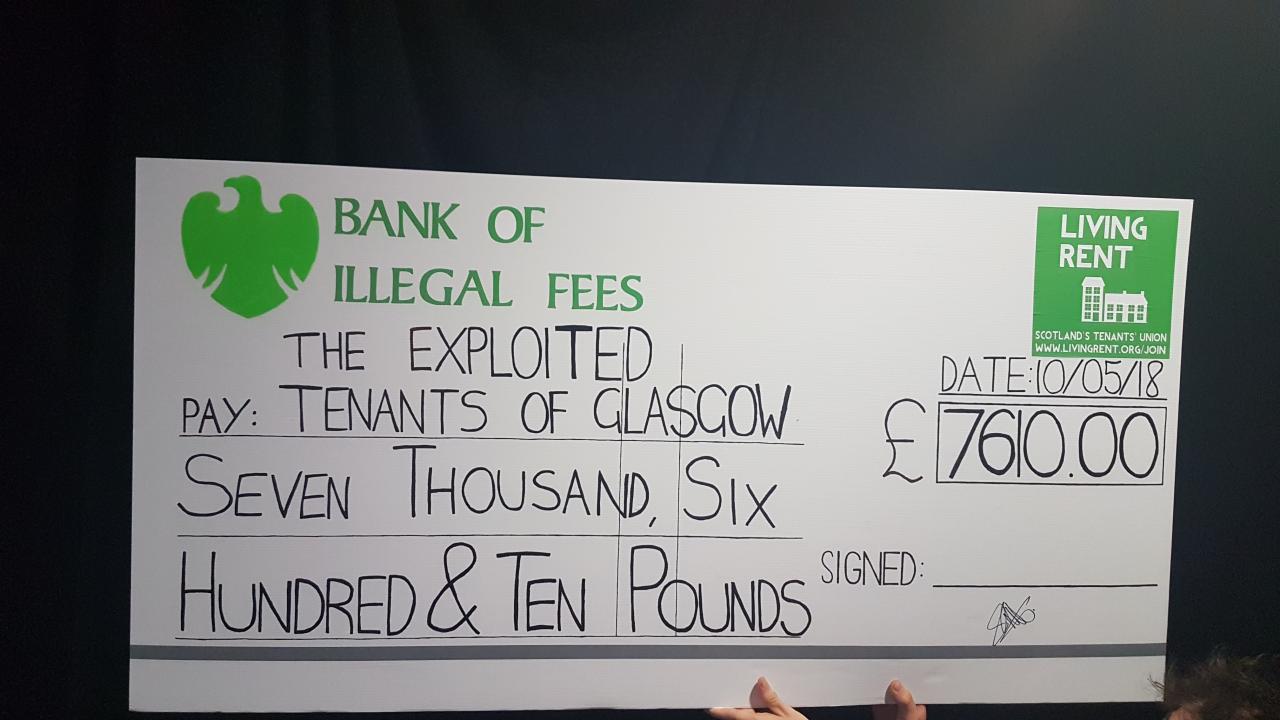 In just two weeks of opening its online survey, Living Rent has identified £7610 worth of illegal fees charged by letting agents in Glasgow, according to respondents. The highest charge was £550, while the lowest was £14.99, with some tenants subject to more than one illegal fee.

Living Rent has argued that if a letting agent has been identified as charging these fees to one person, they have likely been doing this in all cases, although some letting agents were mentioned by as many as 12 different people in the survey.

Following Thursday’s protest, chief executive of the Scottish Association of Landlords John Blackwood told CommonSpace: “We have tried to get in touch with the Living Rent campaign in the past to arrange a meeting to discuss how we can work together to end illegal letting agent fees in Scotland.

“There is a lot we agree on with the campaign and think we should work together in partnership to ensure a well-functioning private rented sector.

“As a result of our discussion today I am optimistic that such a meeting can be arranged and we look forward to working with Living Rent in the future to ensure illegal fees are a thing of the past and that tenants receive the professional and excellent level of service they rightly expect from their letting agents.”