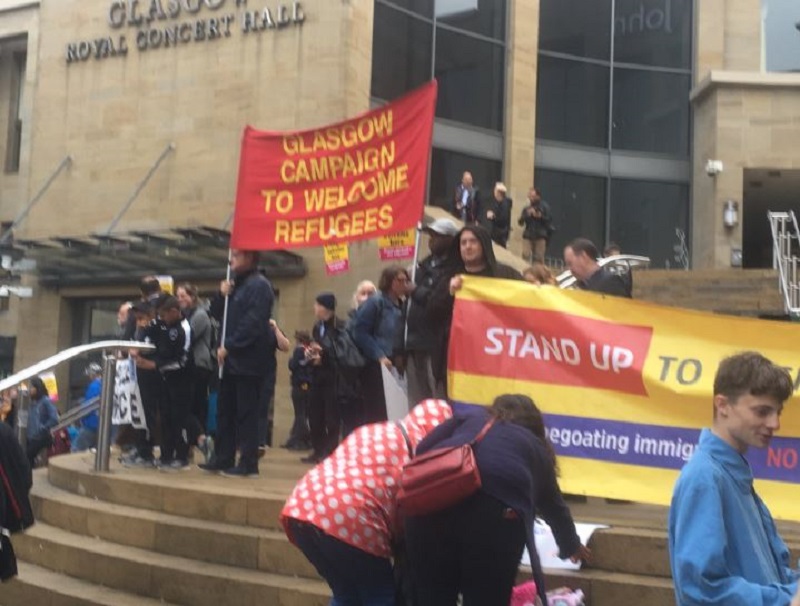 HUNDREDS gathered in Glasgow on Tuesday [31 July] to express outrage at an announcement by the government contractor Serco to evict 300 Glaswegian asylum seekers, which may make them destitute.

An estimated 400 people turned out for the emergency demonstration organised in response to the unprecedented announcement which has sparked a cross-party coalition of resistance.

Government contracted Serco, which provides housing for asylum seekers, announced on Friday [27 July] that it would evict up to 300 “failed asylum seekers”, claiming the UK Government don’t properly reimburse them.

Politicians from the SNP, Scottish Labour, and the Greens asked the crowd to join them in using direct action and civil disobedience in a bid to halt the evictions.

Speaking to CommonSpace after he addressed the crowd, SNP MP Chris Stephens said civil disobedience was an ordinary feature of democracy: “This is the city of Mary Barbour and countless other figures who have stood up for the rights of the marginalised.

“If Serco come to massage their profit margins by evicting Glaswegians from their home then I will be standing outside those homes to prevent them and protect people at risk.

To cheers from the crowd, the Labour MP Paul Sweeney delivered a similarly radical call to direct action, updating a slogan used by the famous Glasgow rent strikers of 1915, Mary Barbour’s Army: “If Serco turns up, our message is clear, God help the eviction officers who enter here.”

Some in the crowd were moved to tears as the personal stories of two asylum seekers affected by the decision were shared from the famous Buchanan steps, with a hunger strike being announced to take place from tomorrow.

One of those who will be going on hunger strike, Rahman Sahah, 32, spoke to CommonSpace about his experience: “I don’t know where I am from, the Home Office tell me I am entitled to Pakistani citizenship but the Pakistani [embassy] tell me that I am not.”

“I have hepatitis and liver problems,” Rahman explains, “and when I cannot afford to eat it means that my health suffers.

“I was born a refugee and I remain a refugee. I have no home. I am only Rahman from camp number 16.”

She said: “The reality is the UK has lost the ability to treat people in a humane way.

“Serco deserves criticism, but importantly we have to ensure the Tory government is held to account for allowing this situation.

“It is also very interesting that the Scottish Conservatives have been completely silent, despite every other party standing together in solidarity and working together.

Other speakers at the demonstration included the tenants’ union Living Rent, who also pledged to fight the evictions by “any and all means necessary”.

The Home Office responded to sharp criticism by maintaining that it upheld the Human Rights Act: “Asylum seekers who would otherwise be destitute are provided with free, fully furnished accommodation while applications are considered. We also cover utility costs and provide a cash allowance to cover other essential living needs.

“While an asylum claim is outstanding, we would not be seeking removal. Even if an asylum claim has failed, we will provide accommodation for those who would otherwise be destitute and who are temporarily unable to leave the UK because of a practical or legal obstacle.

“However it is right that we prepare for someone’s removal if they do not have a lawful basis to stay in the UK and they are not pursuing an appeal.”

Further action is expected to follow the demonstration, with announcements to be made throughout the week by the groups coordinating the campaign.