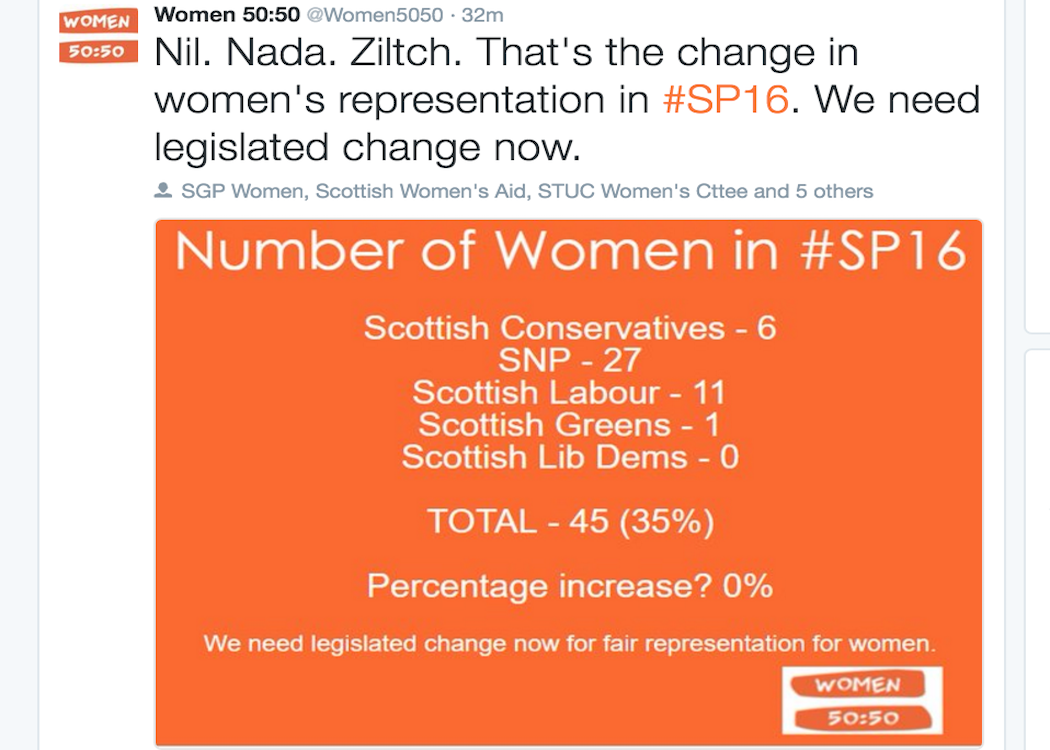 DESPITE hopes of an increase in the number of women MSPs, the Scottish Parliament will once again include 45 women, with Conservative gains partly blamed for lack of progress.

Yesterday’s Scottish parliamentary election returned the same number of women to Holyrood as in 2011, despite use of gender quotas and list zipping by several parties.

“We have yet another parliament which fails to fully represent women in Scotland.” Talat Yaqoob

Meryl Kenny, Lecturer in Gender and Politics at the University of Edinburgh, commented on Twitter: “2003 Scottish Parliament elections remain high [point] of women’s representation at ALL political levels in Scotland (39.5%). Shameful we can’t do better.”

Kenny added: “Largely due to Conservative gains (with dismal figures of women candidates). Lib Dems now men-only both north and south of border.”

Scottish Labour suffered heavy losses, moving to third place behind the Conservative party, which picked up 31 seats. Just 19 of these will be filled by women.

There had been hopes of a rise in the number of women elected; in this year’s election 113 women stood as candidates in constituencies, and 213 on the regional list – significantly more than 2011.

But this did not translate into more equal representation in parliament.

Talat Yaqoob, chair and co-founder of Women 5050 said: “Whilst there was good effort put in by the SNP, Scottish Labour and the Greens, we have yet another parliament which fails to fully represent women in Scotland.

“There has been no increase in the number of women elected and we are in fact representing women less well now than we did in 2003. The case has clearly been made that we need a parliament that reflects society and the way to do that is to create legislation for at least 50% of candidates to be women from every party. We will now be pushing even harder for this.”

There was success for SNP attempts to increase women’s representation. The proportion of women SNP MSPs elected rose from 27 per cent in 2011 to an equal record high of 43 per cent this year.

While Labour, Greens, Rise and the Women’s Equality Party had 50 per cent or more women standing, the SNP had 40 per cent, and the Scottish Conservative party ran an all-male slate in the Highlands and Islands, and its few female candidates were placed low on the regional lists.

The Liberal Democrat’s sole female MSP, Alison McInnes, lost her seat after being bumped down the regional list in a controversial selection process last year.

McInnes had been a prominent voice in Holyrood on issues around policing, surveillance, penal reform and civil liberties. However she was placed second on the list below former MSP Mike Rumbles, who will now be returning to parliament. Rumbles had previously been criticised for his stance on domestic violence.

The party will now have absolutely no female representatives either at Holyrood or Westminster.

The Scottish Greens failed to return to their 2003 high of 7 MSPs, and several of their prominent female candidates failed to gain a seat, including Sarah Beattie-Smith, party co-convenor Maggie Chapman, and lead Central candidate Kirsten Robb. The next Scottish parliament will include six Green MSPs, but only one is a woman.

Party co-convenor Patrick Harvie, who was top of the regional list in Glasgow as well as being the constituency candidate for Kelvin, said on Twitter: “I’m delighted that there are six Green MSPs at Holyrood, but very sorry that despite our candidates being fully gender balanced, our group isn’t.”

Green candidate and vice-convenor Isla O’Reilly also expressed her disappointment in the gender balance of Green MSPs on social media.

Last year the Scottish Liberal Democrat leadership indicated they might move towards gender quotas in candidate lists, something traditionally opposed by the party. Ettie Spencer, who stood for the party in South Scotland and East Lothian, told CommonSpace last week that the lack of women candidates had produced “a big crisis in the Lib Dems”.