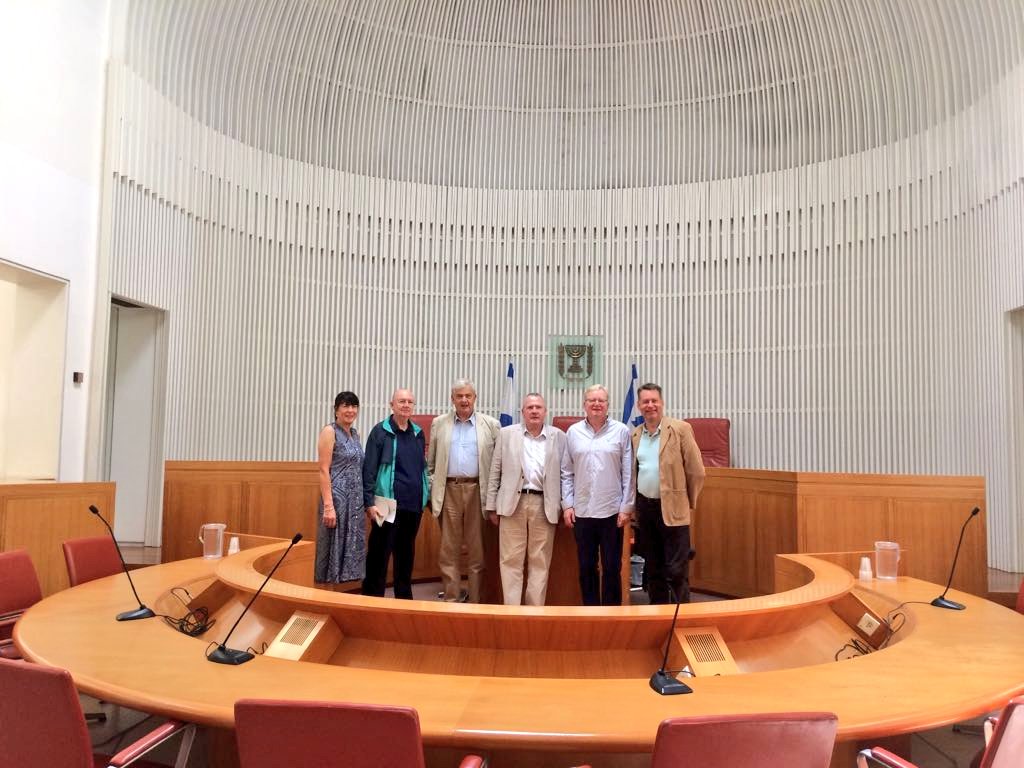 PALESTINE solidarity activists have lashed out at a cross-party delegation of MSPs who have departed on a trip in aid of “building bridges” with Israel, as a storm of protest hits the country over controversial new laws.

A spokesperson for delegation leader and Conservative MSP Jackson Carlaw refused to answer whether the group, which includes SNP and Labour MSPs, would meet with protesters in Israel who are opposing the new law to hear their views, refusing to reveal their itinerary citing “security concerns”.

The week long visit comes as Israel is gripped by a wave of protests against a new nation-state law which privileges Jewish citizens over citizens from other ethnic and religious groups, including more than 1.6 million Arab citizens of Israel, many of whom identify as Palestinian and remained on their land after 1948, when 700,000 Palestinians were forced to flee their lands.

Thousands demonstrated in Tel Aviv on Saturday [11 August] against the law, which privileges Hebrew as the official language over Arabic, establishes, as a state objective, the development of settlements which are a major point of contention in the occupied West Bank and asserts that “the exercise of the right to national self-determination in the State of Israel is unique to the Jewish People”, meaning that other claims to self-determination are not recognised.

Speaking to CommonSpace, Sofiah MacLeod of the Scottish Palestine Solidarity Campaign (SPSC) described BBI as a “forum for the pro-Israel lobby group in Scotland”.

She said: “There is no question that the so-called ‘Building Bridges with Israel’ Cross Party Group is a forum for the pro-Israel lobby group in Scotland.  The group was established to deal with rising sympathy with the Palestinian cause in Scotland, including amongst elected representatives, and to counter the strong campaign for the Palestinian call for boycott, divestment and sanctions against the state of Israel (BDS) – Israeli officials saw Scotland as a “hub” for BDS campaigning.

“Scottish PSC has worked hard over the years to respond to the BDS Call from Palestinian civil society, claiming some key victories around cultural boycott, attempts to criminalise BDS activity and through campaigns around complicit companies such as Eden Springs and Veolia.  It is no surprise that the Israeli government and their partners would work so hard to try to win back some ground in Scotland.

“All this while the Israeli government codifies the apartheid nature of the state of Israel in law, and as they orchestrate an international campaign of smears against political opponents – be they Israeli, Jewish or non-Jews – with the intention of threatening reputations, jobs, university tenures and scholarships, it is shameful that these MSPs are willing to be hosted and feted by the perpetrators.”

Responding to the criticism, Carlaw’s spokeperson said: “It goes without saying that the attendees support the right of Israel to exist and have nothing further to add on the comments from the SPSC.”

Responding to CommonSpace requests for an itinerary of events and orgnisations to be visited by the group, a spokesperson for Carlaw said: “We are unable to disclose the itinerary in advance as you will appreciate security concerns play a part for some of the visit. Where appropriate pictures will be put out on social media following individual visits.

“A full report of the trip will be provided to the next meeting of the Building Bridges with Israel Cross Party Group.”

Carlaw has posted about visits to the Israeli Supreme Court and the Yad Vashem Holocaust Rembrance centre on the first day of the trip (13 August).

BBI describes its purpose as to “engage with Israel and build links based on business, culture and academia as well as exploring and countering issues of anti-Semitism at home and abroad.”

The minutes of the group’s proceedings [13 June] appear to confirm SPSC’s view that the group was established to push back against Scottish pro-Palestinian activism.

Its most recent batch of minutes concludes with Carlaw asserting that opposing “anti-Israel rhetoric” was a focus of the group.

They read: “Jackson thanked the speakers and noted that part of the reason the group was formed was to deal with anti-Israel rhetoric, and noted the challenges are quite profound.”

The new nation state law, established as a ‘basic law’ of the Israeli state in July, and therefore difficult to repeal or alter, comes on the heels of President Donald Trump’s decision to move the US embassy to Jerusalem, enacted on 14 May. The move met with mass protests from Palestinians, who viewed it as a repudiation of the aspiration to Palestinian statehood, and violent incursions against Palestinian protesters and communities by Israeli armed forces.

At least 110 Palestinians were killed over two weeks of protests, which also demanded an end to the ongoing siege of Gaza by the Israeli state, which has seen living standards decline to the stage where the strip is “unlivable”, according to the UN.

A spokesperson for Lyle would only confirm he was on the trip and would return at the end of the week. Fee had not responded by time of publication.