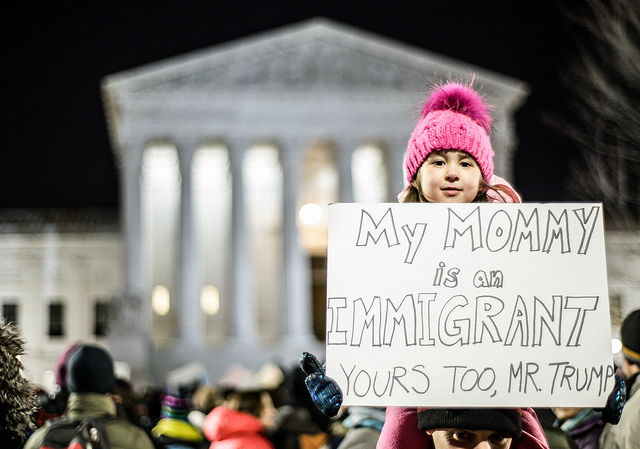 SCOTTISH Tory leader Ruth Davidson has come under criticism after her party failed to criticise US President Donald Trump’s ‘Muslim ban’ after it came into effect today.

Citizens of Iran, Libya, Syria, Somalia, Sudan and Yemen as well as all refugees are banned from the country. Those with an immediate family connection such as a spouse or sibling may be considered for entry.

The temporary ban represents the fruition of one of Trump’s most radical rightwing policies, first flaged in his campaign to become Republican presidential nominee in 2016, when he called for a “total shutdown of all Muslims” from entering the US.

Just hours after the ban was introduced, it became the subject of a legal challenge by the state of Hawaii.

“Anyone kidding themselves that Ruth Davidson’s Tories are the friendlier, cuddlier variety should think again.” Jonathon Shafi

Following the General Election, which saw Prime Minister Theresa May lose her Commons majority, Davidson said she would press for ‘soft Brexit’ maintaining Scotland and the UK’s place in the single market. The Scottish Torys’ 13 seats mean they have a deciding say over any matter of policy at Westminster.

CommonSpace asked if the Scottish Tories could deploy their new found autonomy of position to criticise the Muslim ban. They didn’t answer.

CommonSpace also asked the Scottish Conservatives what they had to say to Scots with relatives effected by the ban. The party remained silent.

Jonathon Shafi, who helped to organise anti-Trump protests during attempts to enact the ban earlier in the year, told CommonSpace that Davidson had the power, but not the will to distance herself from Trump, who is a key international ally of May.

He said: “With 13 seats the Scottish Conservatives hold the balance of power in this Tory-DUP stitch-up government.

“They could distance themselves from the Muslim ban and use their leverage with the UK Government to pry-apart the May-Trump special relationship, isolating the Trump regime at a time when it is attempting to normalise state racism.

“They choose not to only because they support the Atlantic alliance, which is central to US and UK geo-political strategy.

“They choose this shameless political orientation regardless of how reactionary, racist and authoritarian the US government becomes. Anyone kidding themselves that Ruth Davidson’s Tories are the friendlier, cuddlier variety should think again.”

The traditional alliance between the US and the UK has been reinforced by May since Trump’s election. Her plans for hard Brexit meant finding new international trading partners outside the EU. She was heavily criticised for her closeness to the new hard right administration.

Shafi also said that the continued support of May and Davidson for Trump was yet another reason to protest tommorrow in London agains the Tory-DUP government.

“When Trump took office earlier this year, many felt depressed and powerless in the face of an apparently insurgent right. We should always remember these last few months, when the tables have been turned on Trump, May and the French National Front.

“We should press home our advantage against those who try and divide us for the benefit of the rich and powerful.”