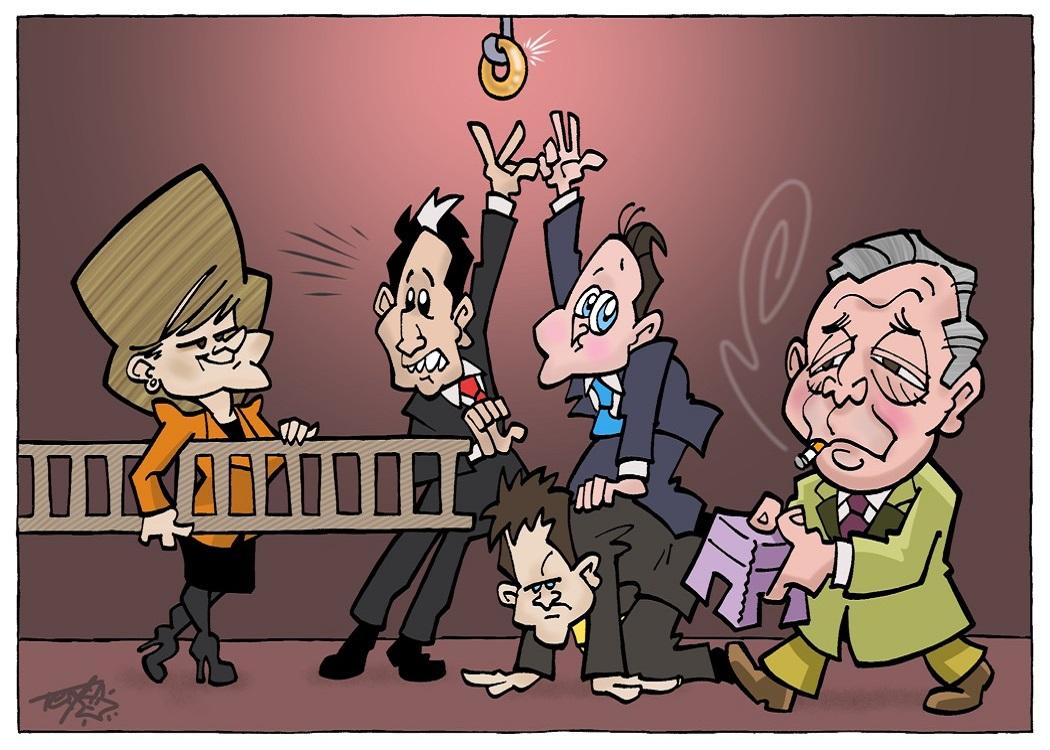 TAKE a long, deep breath and imagine how this General Election would have played out if the independence referendum had never happened.

Can you feel that? The overwhelming sense of hopelessness, monotony and misery as rich white men in suits argue constantly over the microscopic changes to policy their party would make if only you would vote for them.

They keep droning away while the majority of the country look on and think ‘f**k the lot of you, you utterly useless w**kers’, before eventually, reluctantly, voting for the lesser of the evils on the menu. All the while, Scotland sits in the corner, quiet as a mouse, doing what it has always done and is basically ignored by just about everyone.

After the No vote the beast of democratic awakening was supposed to dip its head with embarrassment, whine in apology for making a dreadful mess and stay wheesht for the foreseeable future.

Ah, British democracy. That’s how it should be, right?

Unfortunately – and much to the disgust of ‘proud and patriotic Scots and Brits’ everywhere – the independence referendum did happen and it seems only now is the British establishment feeling the full effects of the consequences of its actions during it.

It brought out every dirty trick in the book to try and scare the witless Scots into voting against governing their own country. During the last two weeks of the referendum the people of Scotland were subjected to a media scaremongering campaign the likes of which this country has never seen. And it worked… but only just.

You see, Scotland unleashed something during the referendum campaign; an unruly beast hell-bent on seeking out and reviving that most dangerous of ideas: democracy.

Across the country – in town halls, community centres, schools – regular working people gave up their time, money and effort to campaign, to organise and to rally themselves ragged for two years.

They stood up – stepping out from the comfort of the shadows of political apathy – to declare that they believed in a better future for themselves and for their children, and they worked tirelessly trying to convince fellow Scots of that same belief. And while the Yes campaign was not without its faults, it offered something more to ordinary people than the stale meal of Tory with a sprinkling of red pepper Tory-lite.

Yet the people of Scotland voted No on 18 September, and after that result – the ‘settled will of the Scottish people’ – the beast of democratic awakening was supposed to dip its head with embarrassment, whine in apology for making a dreadful mess and ‘dividing the nation’, go into exile in the back garden and stay wheesht for the foreseeable future.

It was expected – as was traditional – for it to only be seen again when Scotland’s gracious masters called on it to put a cross next to a Labour candidate’s name at the polling station. It turned out that the beast had other ideas.

Those who voted Yes in the referendum were dealt a hammer blow on 19 September, but as they lay there, on the floor, in agony at the thought of all that had slipped through their fingers, something happened that the holders of the ‘Rings of Power’ did not expect.

During the last two weeks of the referendum the people of Scotland were subjected to a media scaremongering campaign the likes of which this country has never seen. And it worked… but only just.

Those ‘pesky nats’ got back up off the floor and did the unthinkable: they carried on trying to build that country they had campaigned so hard for, except now they aim to do it within the confines of the union.

As we witness the British press, pundits, broadcasters, politicians and corporate interests falling over themselves to grab the loudspeaker and announce to the people of Britain of the impending apocalypse if Scotland dares to ‘have a say’ in how things are run, it’s worth looking back at the referendum and remembering all those lovely things that we were told and promised if we voted No.

We were repeatedly fed the lines that Scotland was an ‘equal and valued member of the union’, part of a ‘family of nations’, and we were told to vote No and instead use our votes to ‘push for change as part of the UK’. David Cameron graced us with a flying visit to beg us poor Scots not to break up dear old Blighty and to stay in ‘the greatest union for 300 years’. He even said we could use our votes to ‘kick the effing Tories out’.

Those ‘pesky nats’ got back up off the floor and did the unthinkable: they carried on trying to build that country they had campaigned so hard for, except now they aim to do it within the confines of the union.

Our chums in the Better Together campaign (mainly the Labour ones) told Scots repeatedly that radical change was possible ‘within’ the UK. They insisted that we didn’t need to separate, we didn’t need to ‘break-up Britain’, to divide the country, we just needed to vote No and then we’d see about ‘transforming the United Kingdom’, making a progressive nation, together. This could be the start of a radical Britain.

Added onto this increasingly large pile of absolute horse manure was the aptly nicknamed scaremongering campaign – Project Fear. Every catastrophe known to man would occur if us bloody Jockos had the audacity to vote to govern ourselves.

The banks would collapse and move, we’d be penniless, the Sun would explode and destroy the solar system, Scotland would be defenceless, Michelle Mone would leave, jobs would be lost, we’d all be ‘foreigners’, nobody would come and visit and Scotland would end up as a post-apocalyptic wasteland with everyone bartering with Irn-Bru bottle caps and bowing down to the will of ‘Dictator Salmond’.

The much prophesied ‘Devo Max’ Scotland was promised was swiftly locked back in the Westminster dungeon and a plate of scraps brought up.

Now it just so happens that many of the scare stories actually came to pass even after the No vote. Businesses folded, the value of the pound took a hit (but nobody talked about that), Britain started bombing Iraq mere weeks after the referendum result, the oil price collapsed and many jobs in the North Sea were lost.

The much prophesied ‘Devo Max’ Scotland was promised was swiftly locked back in the Westminster dungeon and a plate of scraps brought up and offered to us in its place with a note that read:

Here’s your Smith Commission powers. It’s not much but what the hell are you going to do about it? You voted No!

Much hilarity and lols,

It seems being lied to by the powers that be didn’t agree with many Scots and soon after the referendum the pro-indy parties were seeing an unprecedented surge in membership.

Here we are though, General Election around the corner, where it looks like Scottish Labour – under the magnificent stewardship of the really Scottish Jim Murphy – is on track to be wiped from the game board. “The NHS is safe with a No vote,” they cried before announcing shortly after the referendum that “only a vote for Labour would save the NHS”.

It may be this level of duplicitous skulduggery, and standing shoulder-to-shoulder with the Tories in Better Together, that has forced Scots to jettison the old loyalties, to keep that democratic beast moving forward, and to toss out the useless mannequins that pass off as Scottish Labour MPs these days.

With Scottish Labour’s fall comes the SNP’s rise and it looks like there’ll be a road trip down south with Alex Salmond leading a cadre of enthusiastic new Nat MPs, who aren’t enthral to UK party masters, down through the doors of the Commons to kick some well needed backsides.

The fallout from this prospective bloc of Nats traipsing to London? Cue Project Fear Two: More Cataclysm. Click play and watch every apocalyptic prediction that was aimed at a Yes vote get dug up, ‘SNP’ scribbled on it, and churned out of every mainstream media outlet. ‘Businesses will flee’, ‘financial black holes’, ‘Michelle Mone will really leave this time! No, honest!’

Scots have heard all of this before, though, and seem to view it all as nothing more than white noise. And how must it smart No voters to see all that lovebombing during the referendum campaign revealed for the snake-oil sales chat it actually was.

So terrified are the city bankers, the Westminster parties and the corporate moguls of the proles getting involved in democracy that they have embarked on a scaremongering campaign aimed at de-legitimising a Labour government supported (on a case-by-case basis) by the SNP. The SNP which will be democratically elected by the people of Scotland. The SNP which will be voted into office and which will make Scotland’s voice heard within the democratic structure of the union.

They’re terrified that the democratic beast Scotland unleashed could very well cross the border and start making noise in England. What if the people start listening?

For those who tried so desperately to preserve the union, they are going an odd way about keeping it intact. Scotland’s voice – and thus the voice of the Scottish people – doesn’t really matter, apparently. ‘Equal partner’ indeed.

The only conclusion to draw from this – as Gordon Brown and John Major are wheeled out of their vampire coffins under the cloak of midnight to scare the peasants back into their huts – is that Westminster politicians and parties don’t actually like that whole ‘democracy’ thing. They’re scared of it.

They’re terrified that the democratic beast Scotland unleashed could very well cross the border and start making noise in England. What if the people start listening? What would the neighbours say? What if the people begin to see that there is more choice in UK politics than the binary between Tory and Labour? What if, gods forbid, they start demanding things? There goes the political hegemony.

As Nicola Sturgeon offers the hand of friendship to the people of Britain, promising progressive politics and policies for all across these islands, the ‘boys club’ of British politics bar the doors, shut the windows, batten down the hatches, put on the PA system and launch cataclysmic predictions about ‘the most dangerous woman in Britain’ in the vain hope that all this democratic engagement will just go away.

Scotland is making its democratic voice heard within the UK electoral system for the first time in decades. The people are, if the polls are correct, preparing to elect MPs who won’t have to toe the line of a ‘main’ party. MPs who can stand up in parliament and argue, with conviction, the need for radical change. How’s that for ‘illegitimacy’?

As the Labour and Tory toddlers continue to throw their toys out of the pram, the people of Scotland look on, unphased, and count down the days to 7 May.

The Scottish people are doing exactly what the unionist parties said they should do in the result of the No vote. They’re aiming to kick the Tories out. They’re aiming to bring about radical change for the whole of the UK and they’re doing it within the UK electoral system.

As the Labour and Tory toddlers continue to throw their toys out of the pram, run around screaming, crying uncontrollably because somebody else is hovering awfully close to their toybox, the people of Scotland look on, unphased, and count down the days to 7 May.

‘The North’ is coming.

And we’ll drag you kicking and screaming into a progressive and fairer future whether you like it or bloody not.