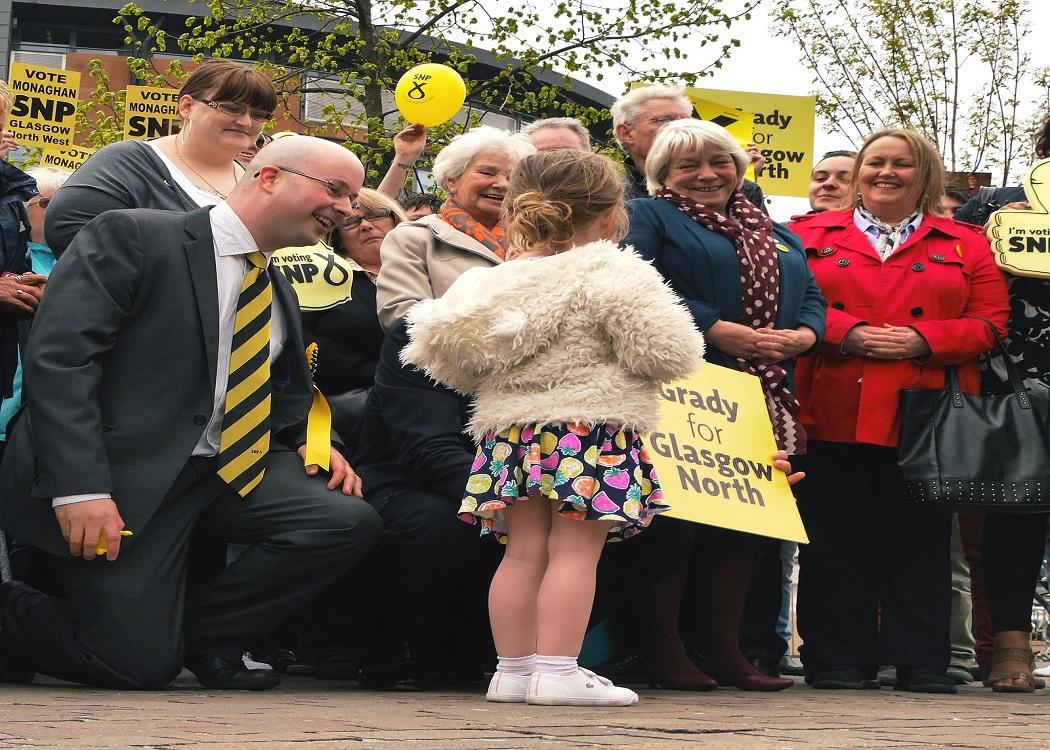 BELIEF can be a powerful thing, especially in politics.

As a voter and as a citizen, to believe in a cause or an idea – out-with the acceptable norm – is to open yourself up to a certain level of vulnerability. It is to take off the modern armour of cynicism, snipe and indifference, and leave yourself standing out there, exposed, with really only that belief, that idea, to cling to.

In the post-modern, internet-saturated, apathetic period of disengagement that we live in, belief in a cause – much the same as religion – is derided and dismissed by many.

No matter the time taken to reach a decision, no matter the research, the engagement, the internal pontificating; those whose beliefs lie in anything other than the accumulation of wealth and the capitalist ideology are treated with scorn, derision and outright contempt.

The majority of the British media resorted to dismissing Yes voters as ‘dreamy-eyed, anti-English fantasists’.

There’s a narrow prism of acceptable thought in the British press and don’t you dare have the audacity to step outside of it.

Scotland witnessed such commentary during the referendum campaign. The majority of the British media were so incapable of – or uninterested in – understanding what was happening in Scotland that they resorted to dismissing Yes voters as ‘dreamy-eyed, anti-English fantasists’ who were only voting for independence because they thought it’d be a ‘utopia’ and ‘a land of milk and honey with whisky and oil on tap’.

Hardly any attempts (with very few exceptions) were made by the mainstream press and broadcasters to understand or even explore the reasoning behind why people were voting Yes.

Only after the No vote was delivered did BBC Scotland see fit to finally explore the scale and diversity of the Yes campaign. For a few days after the vote, the lid came off and there were reports and broadcasts about the various campaigns within the broader Yes movement – Common Weal, Radical Independence Campaign, Women for Indy.

Yet as soon as it became apparent the Yes movement wasn’t finished, that it wasn’t going away, that lid went back on and shut tight. Ideas can be contagious after all.

During this year’s General Election campaign we have seen the same level of contempt and derision from the London press (as well as Scotland’s own) towards the rise of the SNP.

In trying to come to terms with what is happening in northern Britain – which starts at Hadrian’s Wall according to that bastion of intelligence and integrity Nigel Farage – the British political commentariat have reached an earth-shattering conclusion as to why the people of Scotland intend to vote the way they do: ‘The Scots have gone mad.’

That’s right. The only conceivable way in which to quantify Scottish voters deciding to place their trust in, arguably, the only political party in Scotland that can actually stand up for Scottish interests at Westminster is ‘madness’.

The British political commentariat have reached an earth-shattering conclusion as to why people intend to vote the way they do: ‘The Scots have gone mad.’

Let’s throw in Alex Massie referring to the rise of the SNP as “religious zealotry” as well, just for good measure. Oh, he didn’t mean it ‘like that’. Aye, pull the other one, pal.

“It’ll be undemocratic,” they cry, without a hint of fucking irony.

Democracy. I do not think that word means what they think it means. Bless their little – but heavily overpriced – cotton socks.

This General election campaign has also seen another rather uncomfortable narrative coming forth recently, particularly in the Scottish press. SNP voters are painted as nothing more than drones being driven by some insidious hive-mind at the Central Cybernat Hub, incapable of rational thought and probably run by Alex Salmond from his secret lair as he strokes a bond villain cat while eating endless boxes of shortbread.

“It’ll be a one-party state,” goes the cry, conveniently forgetting that that was what Scotland was during the decades it overwhelmingy voted for Scottish Labour. Why let those pesky ‘facts’ and the historical voting records get in the way when you can have a good ole bash at the nats?

I think we’re coming to the crux of the issue that the majority of the mainstream press and parties have with what is happening in Scotland: change.

Scottish Labour’s time is up and when faced with obliteration they can only mumble something about how terrible the SNP is while Jim Murphy has a jog in a Scotland top, encourages ‘bevvy at the fitba’, spins a basketball, goes dancing and holds a bloody road sign – the latter conveniently reminding the Scottish public what at an utter farce the Smith Commission really was.

SNP voters are painted as nothing more than drones being driven by some insidious hive-mind at the Central Cybernat Hub.

Devo-max was it, Gordon? More powers for Scotland? You can go jogging with Jim Murphy for all the good you’re doing. Or go back to sleep. Whichever requires the least effort.

Many are quick to paint the rise of the SNP as a ‘protest vote’ – ignoring the fact its the democratically elected government of Scotland – or that the thousands of Labour voters who have flocked to the SNP out of disgust at what their party has become ‘aren’t real socialists’.

Once more, our brave guardians of the public’s political conscience conveniently omit what the Labour party currently is, it’s record in power, and what it stands for: Trident, austerity, zero-hour contracts and a worrying embrace of anti-immigration rhetoric.

They must be a new type of socialist, one I’ve never heard of. Rare, like bloody unicorns.

One of the highlights of the referendum campaign was the wellspring of progressive and radical ideas that came forth from a variety of people, organisations and groups.

Despite being painted as backwards, tartan-obsessed, haggis-chasing, kilt-wearing hillbillies, many Scots voted Yes as a jump-off point for a fairer, more prosperous country. Despite the fact a No vote was delivered, those beliefs in a better future, in a fairer society, they don’t just fade away. They don’t vanish. They have endured and have even been strengthened by the referendum defeat.

And yes, the SNP and wider post-Yes movement has it’s fair share of zoomers and idiots but doesn’t every movement on the face of the Earth? Human beings are human beings, after all. Yet the majority of the Scottish media focus on this minority of numpties – conveniently ignoring the unionist parties’ own, some of whom are prominent party members and spokespeople – as if they are the model citizens every Yes voter wants to live up to.

Despite being painted as backwards, tartan-obsessed, haggis-chasing, kilt-wearing hillbillies, Scots voted Yes as a jump-off point for a fairer, more prosperous country.

It is disengenous at best and damn right unprofessional. But what else have we come to expect? Idiots don’t negate the wider message but throwing mud and cheap photo-ops seems to be all the unionist parties have to offer.

‘The SNP aren’t real socialists!’ comes the cry again, as if that statement alone will suddenly make the high percentage of SNP voters up sticks and move back to the rightful, loving embrace of Scottish Labour. Fat chance, Jim. Keep holding your road signs. It’s good work experience.

I may be an idealist but I’m also a realist. I have issues with some SNP policies and the actions of the wider party on certain issues but I recognise it’s the best vehicle Scotland currently has for driving change at Westminster.

Alan Bissett stated that the people of Scotland will use the SNP “like a battering ram” to smash open the Westminster parliament and shake it up. And the utterly deranged levels of bat-shittery from the right-wing press shows how successful that tactic is before the SNP has even stepped through the door.

I’m voting SNP in May, but I am under no illusion as to the limitations of its policies in terms of radicalism and progressiveness.

Like many people, I don’t believe simply voting for the SNP will yield all the results, or will give the people of Scotland the answers they seek. I am canny enough, as are many Scottish voters, to play the long game in this matter.

The 2016 Holyrood election is a mere year away and for all the fuss over the General Election, it is there that Scotland’s progressive rhetoric will be weighed. It is in that democratic arena that the progressiveness of Scotland’s citizens will be properly tested.

In 2016, if the people of Scotland lie back and let the SNP merely replace Scottish Labour as the ruling party without forcing through radical change, then I’ll accept we’ve failed. If that happens then I’ll question what we’re doing, what we really are all about, what we really hold dear and if independence would really have changed anything.

But I don’t think it will.

Scots vote differently in different elections, that was a recurring statement during the indyref. So why, after the population has become even more engaged with politics, would that suddenly stop? By painting SNP voters as simpletons, as dupes, as chest-thumping crazy nationalists (I’m looking at you, Jamie Ross), the mainstream political parties continue to dig their own political graves north (and maybe even south) of the border.

In the Holyrood election I believe we’ll see something similar to the arguments and debates during the referendum campaign, except far more acute and robust as they’ll be tied to the parameters of the Scottish Parliament.

By painting SNP voters as simpletons, as dupes, as chest-thumping crazy nationalists, the mainstream political parties continue to dig their own political graves.

We have the SSP, the Green Party and even left projects coming forth from the likes of RIC and the Common Weal. And let’s not forget the work of Women for Independence, which continually succeeds in getting women into politics with not a pink bus in sight.

These organisations will be not be idle. The people in them will not sit back and let the SNP assume Scottish Labour’s mantle and then rest on their laurels, job done.

I suppose it’s easier to paint Scotland as a one-party state, though, full of simpletons, than actually address the impending demise of the once-concrete hold of the Scottish Labour Party.

In my experience, those who campaigned for independence did so out of a belief for a better future. Those beliefs hold firm even now and they will continue to carry this post-Yes movement through the General Election and onto 2016.

There will be bumps, division and debate, but all of these people are brought together by the overiding belief that they can make this country a better, fairer place to live and work for everyone.

For good or ill these people have found faith in something beyond what any other political party is offering, and to truly come to terms with what is happening in Scotland – and what happened during the referendum campaign – is to come to terms with the very nature of belief.

The times they are a’ changing, folks. Maybe it’s about time the British press and mainstream political parties changed with them.