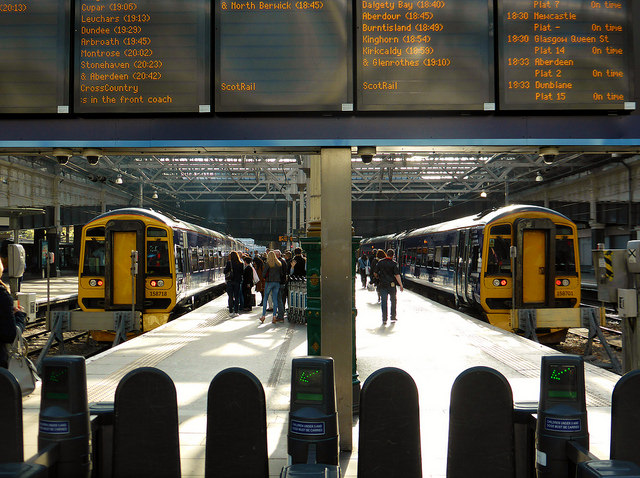 THE head of the TSSA trade union has called for a meeting with First Minister Nicola Sturgeon to discuss Abellio’s management of ScotRail, following the franchise’s announcement that it drew a profit in 2018 despite its widely criticised poor performance.

TSSA general secretary Manuel Cortes wrote to the First Minister earlier this week to request a meeting, going over the head of Transport Minister Michael Matheson, who Cortes has criticised for an “ideological commitment” to benefiting the privatised interests behind ScotRail.

In the letter, Cortes – who seeks a meeting with Sturgeon before Easter – wrote: “You don’t need any reminders from me that ScotRail’s performance is the worst now since records began in 1997. With its penalties removed for failing to meet its franchise obligations, it’s reasonable to assume it has lost its regulatory incentive to meet them. And given that ScotRail now cost the taxpayer more in public subsidies than it did user public ownership, it seems high time that a high-level review of the franchise is put on the political agenda.”

“Michael Matheson’s ideological commitment to running ScotRail as a gravy train for privatised interests is getting in the way of his duties as Transport Minister.” TSSA general secretary Manuel Cortes

Last month, it emerged that staff shortages had caused the cancellation of 2,691 ScotRail services between April 2018 and 16 January 2019. Additionally, the disruption caused by retraining ScotRail staff on the operation of new Hitachi class 385 electric trains – which ScotRail claimed would lead to the “best railway Scotland has ever had” – led to an average of 46 services a day cancelled towards the end of last year.

Responding to the news, the Scottish Greens called on Michael Matheson to strip Abellio of its contract, and put in place a public operator.

Commenting on his latest demand, Cortes said: “ScotRail’s performance is the worst now since records began in 1997. And with fare prices rising every year, and tax-payer subsidies higher now than they were pre-privatisation Scottish passengers will rightly feel they’re being ripped off.

“TSSA is the union representing rail professionals. We want to share our expertise with Nicola Sturgeon and work with her to protect ScotRail from further deterioration.

“Michael Matheson’s ideological commitment to running ScotRail as a gravy train for privatised interests is getting in the way of his duties as Transport Minister. He’s supposed to ensure value for money for taxpayers and a decent service for passengers. Right now, he’s failing on both accounts. That’s why we’ve gone straight to the top.”

Cortes continued: “It’s time Nicola Sturgeon took ownership of the problem. Under Michael Matheson Abellio have got away with running ScotRail into the ground. She has my telephone number, I’m ready to meet with her as soon as possible.

“Let’s give long-suffering Scottish commuters the railway service they deserve.”

A Scottish Government spokesperson told CommonSpace: “Any meeting requests will be considered under normal practice however the TSSA have opportunities to voice any concerns to Ministers and Transport Scotland officials through regular meetings, the most recent of which was last week and a further one scheduled with the Transport Secretary on 4 April.

“Performance has been unacceptable and that is why ScotRail’s focus must remain focused on delivering a robust remedial plan which puts passenger interests at the forefront of restoring performance levels.  The Remedial Plan has been specifically designed to address train crew and fleet challenges, which have had the greatest impact on cancellations and short formations across the network. Ministers fully expect ScotRail to deliver a Remedial Plan which restores performance back to the level passengers expect and deserve.

“Ministers have also been clear that franchising in its current format doesn’t work and that is why they continue to push Scotland’s interests, including further devolution of rail powers, to the UK-wide Williams review.”