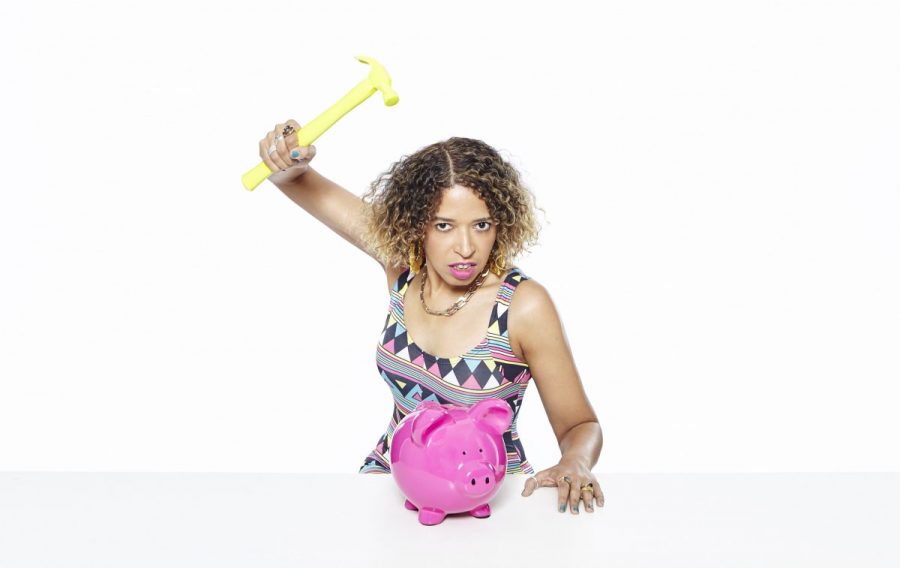 SHOW ME THE MONEY is a performance and personal discussion by writer and theatre maker Paula Varjack about working in a creative industry and the value we place upon it.

Specifically, the play is about money, or rather the lack of it within creative fields and the struggles this presents for people who try to make a living in the arts.

Addressing the audience directly, Varjack tells everyone to stand up. Starting at the figure of £10,000, she asks the audience to sit when the number exceeds their own annual salary. This continues until everyone is sitting down again and works as an easy, non-judgmental form of pay transparency – a practice Varjack believes we should participate in more regularly.

Show Me The Money is funny and passionate. Varjack draws on her own experiences while pondering the sustainability of an industry which thrives on the labours of the unpaid.

The multimedia production includes interview clips from arts professionals of varying capacities. Interwoven throughout the show, the interviews provide comment on issues ranging from pay inequality between creators of work and the arts associates and creative directors who commission them to the taboo subject of having a part-time – non-industry related – second job: “There is a sense that having a job in retail or hospitality means you are not really the thing that you want to be.”

Show Me The Money is funny and passionate. Varjack draws on her own experiences while pondering the sustainability of an industry which thrives on the labours of the unpaid. In one video, taxi drivers are asked whether they would consider taking a job from someone who refused to pay money but suggested instead that the experience would be “good for their exposure as a taxi driver”.

This is a clever and comical twist on the line met by any hardworking creative. The play also ponders the sustainability of London, a city increasingly unattainable to those who are not on a six-figure salary, as a thriving hub for the arts.

While listening to the recommendations of interviewees, Varjack puts on an an “I heart …” T-shirt with the name of different UK cities: “Feel free to cheer for your own,” she tells the audience. It is a reminder of the wealth of creativity and productivity happening across the UK, separate from the work within the capital.

The play also ponders the sustainability of London, a city increasingly unattainable to those who are not on a six-figure salary, as a thriving hub for the arts.

Brexit is discussed as a kind of explosive game changer. The arts projects which are reliant on EU funding will be forced to find alternative means of survival. Varjack, who is of dual UK and American nationality, recalls working with a theatre company on 24 June 2016. The vote, she admits, made her no longer consider where in the country she wanted to live, but whether she wanted to
live in the UK at all.

In a heartbreaking section, she recalls giving a drama class to a group of young people and hearing about their fears and concerns following the Brexit referendum, the consequences of which they will live with the longest despite being denied a say in the process.

There is hope, however, as Varjack believes in the next generation. She ends with a comical, musically-backed, list of the funding she received and money she spent in order to make the show possible – if she is going to talk the talk about pay transparency she needs to walk the walk as well.