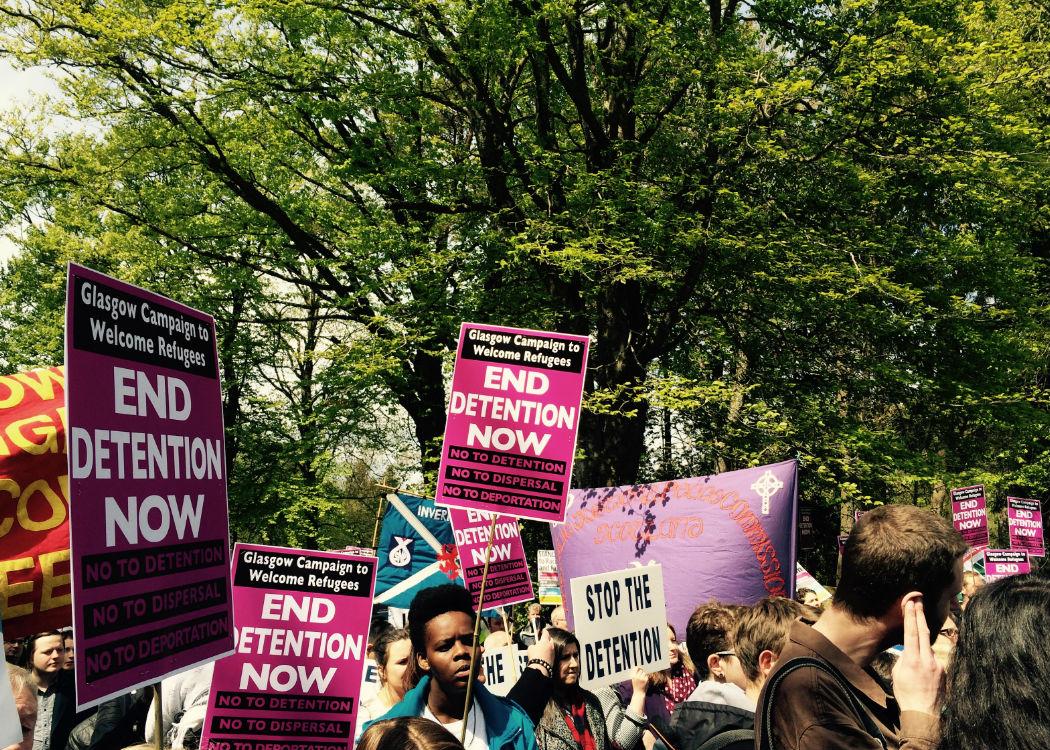 HUNDREDS of people protested at Dungavel detention centre in South Lanarkshire on Saturday calling for the centre to be shut down.

Around 400 people, from trade unions, human rights groups and religious organisations gathered at the facility in North Lanarkshire, which is the only centre of its kind in Scotland.

Asylum seekers are held at Dungavel indefinitely and recent figures showed that many have been held for months and some for over a year. . The Scottish Government says it opposes the centre but the powers over immigration remain reserved to Westminster.

The protest was organised by the STUC and the organisation’s president Lawrence Wason said that they want to see detention centres closed down.

“We want to see an end to detention. We want to see a different, more humane immigration system, and we want to see the UK living up to its global responsibilities and providing safe haven for those who need it.

“The people behind these walls are not a threat to our country. They are just people looking for a
better life. We can have an asylum system without the need for detention.”

Amal Azzudin, one of the Glasgow Girls who campaigned against dawn raids, said: “The Tories are intensifying their racist policies and we must intensify our opposition to them.”

Human rights lawyer Aamer Anwar told the crowd that we “owe it to those people behind those barbed wires to shut down this place once and for all.”

Other speakers including the Reverend Sally Foster Fulton from the Church of Scotland and Margaret Wood from Glasgow Campaign to Welcome Refugees.

Following the speeches, the police’s attempts to stop people from assembling at the perimeter of the detention centre were ignored as the protesters banged the fence to let people inside know they were there.

In recent months, there has been heightened attention on the centre following news of detainees embarking on a series of hunger strikes to protest their detention (click here to read more).

Following the reports, the STUC and other civil society groups asked for access to Dungavel to meet with detainees, however this request was denied by the Home Office (click here to read more).

A Home Office spokesperson said: “Detention is only ever used as a last resort, and for the shortest time possible, after all attempts to encourage individuals to leave voluntarily have failed.”