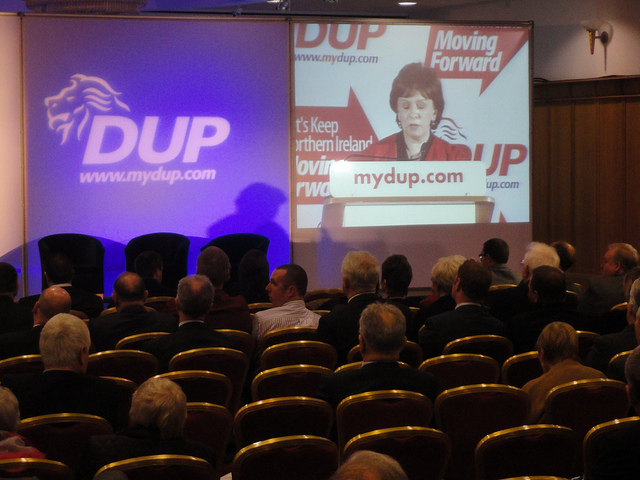 The DUP is under renewed pressure to reveal the source of a large donation received during the referendum on Britain’s EU membership last June.

SINN FEIN, the Irish Republican party, has demanded that the Electoral Commission investigate the alleged relationship between the DUP in Northern Ireland and the Constitutional Research Council (CRC), a shadowy thinktank which donated funds to pro-Union and pro-Brexit business figures that campaigned for Brexit in last year’s EU referendum.

The republican party cite the £435,000 used by the CRC to buy advertising in newspapers in London, Manchester and other cities in the UK’s north urging readers to vote Leave.

The group, chaired by the former vice-chairman of the Scottish Tories Richard Cook, has kept the origin of the funds given to Brexit campaigning secret as under Northern Irish law individual donors are secret but amounts are declared.

Despite the controversy surrounding the DUP’s alleged connection to the thinktank, neither the Northern Irish First Minister Arlene Foster or any DUP officials have come out to deny or distance themselves from the group.

In February of this year, the DUP confirmed that it received £425,000 from “a group of business people led by a Scottish Conservative party member and passed it on to help fund the UK pro-Brexit campaign.”

“Yet the DUP has refused to identify their dealing with the Constitutional Research Council and where the dark money came from. Voters have a right to know from the DUP what the actual source of the donation is.” Máirtín Ó Muilleoir

Accusations from political opponents such as Sinn Féin and the Social Democratic and Labour Party (SDLP) have presented the alleged “dark money” scandal as the latest example of “political excess” from the DUP, which has also faced criticism for its handling of the renewable heating (RHI) debacle.

Foster has already faced calls for resignation and seen a reduction in the unionist vote due to the RHI scandal.

Máirtín Ó Muilleoir, a member of the legislative assembly (MLA) at Stormont for Sinn Féin, raised this issue of the Brexit advert cash yesterday (Tuesday 16 May) saying it was not acceptable that the DUP had not disclosed its relationship with the group.

He said: “The Constitutional Research Council has no legal status, publishes no membership list, has no public presence and has failed to make public where it got the money.

“Yet the DUP has refused to identify their dealing with the Constitutional Research Council and where the dark money came from. Voters have a right to know from the DUP what the actual source of the donation is.”

“Such a move will only help to increase public confidence in the democratic process.” Electoral Commission

Before this year’s assembly elections in March, Arlene Forster denied knowing the exact source of the CRC money or the size of the donation.

The DUP also came under pressure to explain why it spent more than £32,000 during the Brexit campaign on a Canadian analytics group with links to then US presidential candidate Donald Trump. According to the Electoral Commission, the money was paid to Aggregate IQ to target voters during last summer’s EU referendum in favour of voting for Brexit.

Northern Ireland is the only part of the UK where political donations are not disclosed because of a law dating to the Troubles when it was feared political donors could have been targeted by paramilitaries.

£435,000 was given by the CRC, for smaller groups to buy advertising in newspapers in London, Manchester and other cities in the UK’s north all urging readers to vote Leave.

The Electoral Commission said that it was important for the country that there was more transparency on how political parties were funded in Northern Ireland.

A spokesperson for the organisation said: “It’s about the democratic integrity from all quarters. Such a move will only help to increase public confidence in the democratic process.”

The relationship between Sinn Féin and their former coalition partners the DUP broke down in January over a variety of political disputes – including the RHI scandal, the failure to pass an Irish Language Act and increased divisions over the Brexit referendum. The UK Government, criticised for lack of leadership by non-unionist parties in Northern Ireland, could be forced to re-establish direct rule and is currently helping civil servants implement spending cuts as no post-election deal for a powersharing government in Stormont has been agreed.

The DUP declined to comment when contacted by CommonSpace.

Picture courtesy of Alan in Belfast