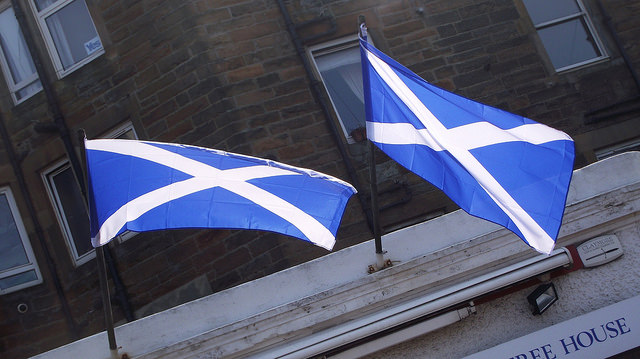 Siobhan Tolland from the Dundee & Angus independence group and Alan Petrie from the Aberdeen Independence Movement write a joint article about the differences in the make-up of their two respective cities, and why they are pursuing different local strategies to win support for independence as a consequence

AS THE independence movement begins to gather pace, discussion about strategy and political direction is growing, in light of the strengths and weaknesses of the last campaign.

As activists within the Aberdeen Independence Movement (AIM) and the Dundee & Angus Independence group, we recognise that these two vastly different cities require very different strategies and politics. Understanding those differences offers the movement a clear working example of the need for a diverse, multiple and localised strategy that engages with the vastly differing needs of our communities.

As independence groups, Dundee and Aberdeen have a very different form and function. Dundee is a loose relaxed structure of individuals, adopting a social politics that attempts to break from the old political structure. Dundee also have a loose structure of different YES groups working alongside each other. The aim of most of these groups is to work within the poorest communities and to remind them that independence can offer a new politics with a genuine positive change.

AIM is a formal structured organisation that incorporates all political parties and none in an attempt to work with clear political messages across the city. It works through a strong committee-based political structure and would see itself as adopting a business model that offers, in opposition to Dundee, a sense of continuity rather than change.

The nature of these organisations reflect the very different history and political demographics of the cities. Dundee, whilst recently winning the reputation of the cool city, has a history steeped in poverty and deprivation that still lasts to this day. Dundee has 28 per cent child poverty and large swathes of some of the highest deprivation statistics across Scotland. Offering realistic hope and strategies against such poverty is essential for the Independence discourse in Dundee.

Aberdeen is really quite different. Whilst oil will play less of a role for Scotland in the next referendum, it will still figure hugely on Aberdeen’s economic landscape. For Aberdeen is very much dependent on oil, bringing, as it does, huge wealth for those connected to the industry. It also brings considerable inequality as the high wage economy sits against the lower pay and high living costs of those outside of the oil bubble.

Most of the working population in Aberdeen are connected to the oil industry, and it offers little economic or employment diversity within the city. A priority for AIM, then, is to ensure the many dependent on oil that the industry will be safer and more stable with independence, as well as offer opportunities to diversify the economy outside oil.

As a result of these differences, the two cities show very different political make-up. Dundee’s political history is often marked by a radical and labour tradition and politically it has been very much a labour stronghold with SNP strength. Until 2015, that is, when SNP took both Westminster constituencies.

In terms of the politics of independence Dundee was YES city, voting 57 per cent in favour of independence. Aberdeen, on the other hand voted No with 58.6 per cent of the vote. On the independence issue, then, Dundee and Aberdeen sit almost as polar opposites. Interestingly, both voted similarly on the EU referendum.

Because of this, the structure and discourse of an independence campaign has to be vastly different. Working with very different political demographics, the priority of the Aberdeen Independence Movement is to convert the soft No’s as the main political strategy to ensure a victory. Dundee’s priority is to get the previous Yes voters out and voting yes again.

Importantly, also, the type of nationalism is somewhat different in each city. Like Glasgow, Dundee sits with a collapsed labour tradition that has moved and defined the politics of independence within the city. It still also contains a significant enough Unionist Labour tradition, albeit now small. Dundee’s independence movement sits within that long radical political history.

Aberdeen, again, is very different, sitting as it does, with a sense of nationalism that is conservative in nature and hasn’t been hugely impacted by the post-industrial labour politics of Dundee. Aberdeen’s nationalism is born from a mixture of Labour, conservative and liberal democrat traditional support. SNP’s victory in 2015 Aberdeen general election, for instance, came from a collapse of the Liberal Democrats, rather than Labour, as happened in Dundee.

With that, then, the two independence groups require different political philosophies. This is summed up in the Radical Independence Movement’s relationship to both cities in the last referendum. Despite RIC’s good work in the deprived areas of Aberdeen, it is a concern that, city-wide it may have lost more votes than it gained. In Dundee, marked as it is with so much poverty, their presence was pivotal in galvanising the marginalised and helping the city vote YES.

And so whilst Dundee will inevitably foster a left wing vision of independence, Aberdeen takes a generally more cautious independence discourse. Dundee articulates its nationalism through a class-based political ideology. Aberdeen articulates itself through a more traditional pre-labour movement & identity-based nationalism, and work on a politically pragmatic approach.

The conservativism of Aberdeen, then, sits against the radicalism of Dundee. Indeed, even within the cities a singular approach is recognised as somewhat inadequate.  AIM’s business model approach is unlikely to persuade voters in the hugely deprived areas of Aberdeen like Torry. Additionally, the new politics position is unlikely to hold sway in the prosperous areas of Dundee, like Broughty Ferry.

It is difficult to imagine how a one-size-fits-all campaign can span both these cities’ needs in the next campaign. This is similar for regions and areas across Scotland. Comparing Dumfries with Glasgow, for instance, would throw up vastly different cultures and, thus, understandings of independence. Within the broad vision of independence, there are many visions of independence.

We will only win independence if the campaign reflects the broad political spectrum that Scotland is, allowing people to find a space for themselves within the new independent Scotland.  Recognising these crucial regional and local differences is one of the most important things we can do. And the importance of building local autonomous independence organisations with intimate understanding of our communities has never been clearer.