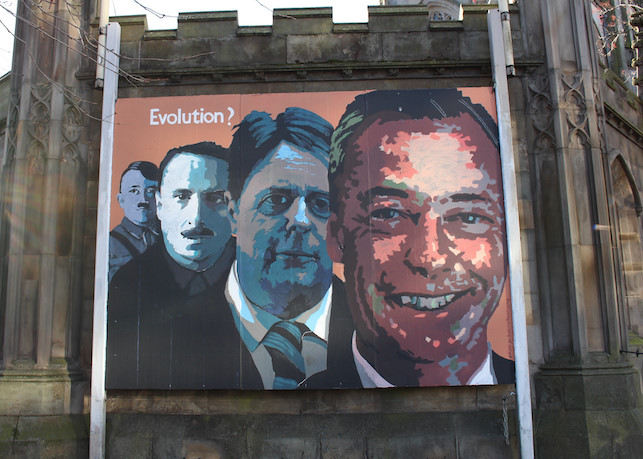 THINKING about Brexit reminds me of John Carpenter’s 1980’s film, They Live. Our homeless hero finds a pair of Hoffman glasses that allows him to see the truth for what it is: aliens hiding in our world preparing to take over.

As John Nada adjusts to society he sees our media giving us subliminal messages to conform and stay asleep and our politicians spouting ‘faith in our leaders’ standing on a podium against the sign ‘OBEY’.

David Cameron: ‘I could not give a damn for the European Union. It’s just my job and all those privileges are under threat, you see. My old Eton school chum want to oust me. So please vote in, so I can maybe offset these chaps trying to finish me.’

And gruff buffoon, Boris Johnston: ‘I have no care for anyone or anything except my own need for power. I want my old Eton chum’s job. In addition to this, if I want to treat people like scum, these damn pesky European convention of human rights just gets in my darn way.’

Imagine it: A vilification of foreigners, accompanied by a core belief that some deserve more human rights than others.

This is what has dominated the EU referendum debate. It is really just the right wing establishment struggling to keep power from the ultra-ultra-right establishment trying to gain power.

I know outside that establishment ego trip there are some serious issues to be discussed. But the problem we have now is stay or go the right have control.

Imagine it: a vilification of foreigners, accompanied by a core belief that some deserve more human rights than others. All humans are equal, but some are more equal than others.

A Brexit will accelerate this dehumanisation. Labour rights through the European social charter openly dismissed by Boris Johnston as bureaucratic and cumbersome. The removal of the European court of Human Rights would follow. No matter where we stand we will be shackled to that Westminster ultra-right politics.

Your new poster resembles outright Nazi propaganda, @Nigel_Farage. Thanks to @brendanjharkin for pointing it out. pic.twitter.com/Rd89XZSvfD

This is what makes me increasingly frustrated with sections of the left arguing for a left wing exit. Actually that’s not true. It’s not the arguments for a left wing Brexit that bothers me so much.

I get the arguments for leaving. I understand very clearly how brutally the European Central Bank crushed and publicly humiliated Greece because they dared to challenge the austerity agenda.

I understand what this means for trying to creating a thriving social progressive nation. I also get that the EU is a fundamentally neo-liberal institution that will push the needs of the market above all human needs, quashing democracy should it ever interfere.

And if we were sitting in a post-independent Scotland taking steps to take control back from the multinationals and bring key industries back into community ownership then I might actually vote to exit the EU.

The fact is there is no space for a socially progressive departure at this point in time.

And if we were discussing expanding the social chapter to further consolidate workers rights then I might see the EU as hindering our attempts to humanise working conditions.

But those damn Hoffman glasses are on and this is not our political reality in any way. Our reality is a right-wing government moving even further to the right, through the Conservative Brexiters. A campaign that is based on the fear of the foreign.

A Westminster government that has shown a complete disregard for the poor, weak and vulnerable in society, and are questioning our need for human rights. And the current move within the Conservative Party sees a shift that makes David Cameron look almost caring.

So I ask those who support a left wing Brexit this question. How much social progression will there be in this Brexit? What possible political circumstances in the next 3-4 years would allow a socially progressive departure on any level?

So I appeal to those on the left who want Brexit. I understand the principles that define the argument.  But…see this Brexit for what it is

The fact is there is no space for a socially progressive departure at this point in time. And unless the EU will take us even further to the right of Boris Johnston et al, then it can never be a progressive move. And to think otherwise is just wishful-thinking politics.

For when the votes are counted, no one will distinguish between a left wing exit and a right-wing xenophobic exit. The only exit will be defined and controlled by the current government. Our political reality is that a Brexit will be controlled, defined and determined by the ultra-right conservatives with a UKIP push from the side-lines.

So I appeal to those on the left who want Brexit. I understand the principles that define the argument.  But put on those Hoffman glasses and see this Brexit for what it is: an ultra-right wing move that will rip up the remnants of a socially progressive society, with Scotland caught in its political net.

It may be difficult on polling day, as echoes of Greece ring in your ears. It might even hurt a little. But at this point in time it’s the only choice we have to curb this ever increasing ultra-right wing government becoming unfettered by those pesky human rights.