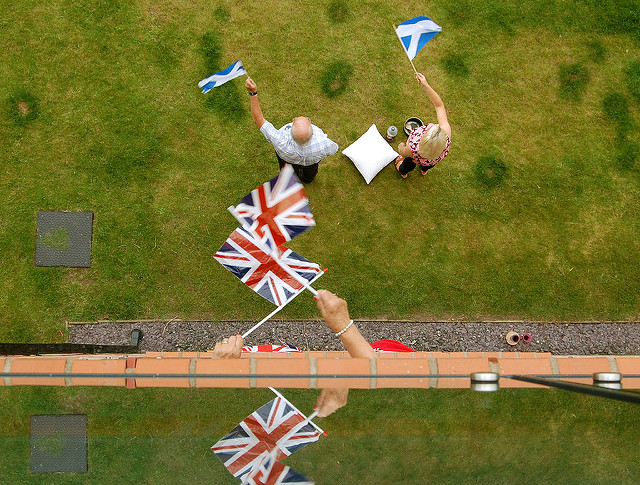 Siobhan Tolland, a historian and Yes activist in Dundee, argues that Brexit is an English crisis in the denial phase of British imperial decline, and that the tide of history is heading towards an independent Scotland

AFTER the first referendum, I didn’t seem to have the despair and despondency that most YES voters had. I consoled myself in the knowledge that that referendum was just the first important step towards independence. The referendum was never an end for me, but just part of a longer historical development of Scotland that would ultimately lead to independence.

As a historian, I see society as a push and pull of movements through time. Political structures evolve, struggle against other powers, mature and then die. The birth and death of empires is a good example of these movements: Monolithic power structures that dominate large swathes of the globe. From Persia to Rome to the USA of today.

The rise and long slow death of an empire is seen right here on these islands. A Victorian heyday where the brutality of Britannia ruled unhindered right up until the post-second world war period. Thereafter, the British Empire sailed only on the coat-tails of the newer, bigger vicious empire of the USA. Empires come and go.

Brexit throws issues of English identity and empire out into the open. German history scholar, Nicholas Boyle explains that Brexit is an English psychosis born of the trauma of ‘imperial amputation’ and its inability to come to terms with their identity – as one of equals – beyond their imperial collapse.

In other words, Brexit is a manifestation of an English cultural psyche that cannot cope with the idea that they are no longer the Big Man in global politics. You can’t get any more existential than a nation facing its own death. Brexit is stage 4 in the death of empire. And the crisis comes from the stage of denial.

And it is an English crisis. And we need to remind ourselves of that – regularly. Scotland sits alongside this crisis but is not really part of it. For Scotland spent the last century imagining an identity that has existed outside this Englishness. We are not having to grapple with the same existential angsts as England does. For our imagined nation is very different from that created in England’s mind.

It is these different historical developments that has allowed Scotland to psychologically extricate ourselves from the now crisis-ridden England. Brexit has just clarified how divergent the paths of Scotland and England now are. And, as England becomes entrenched in the Brexit landscape, our different history allows us to imagine a more flexible future.

READ MORE – Anthony Barnett: Why the EU vote is an English, not British, reckoning

Two choices are now set before us; to be part of a Brexit UK or to be independent. I would argue that choosing to remain part of the UK at this point in time would be an enormous act of self-harm. Because it’s one thing tying ourselves to an unknown chaos just to get rid of the status quo (as we can argue with both Brexit and Trump). It is an entirely different matter tying ourselves to a ship we know is sinking.

The crisis of England is laid out before us in clear and unequivocal terms. To choose that would be such an unimaginable act of self-harm that it would make both Brexit and Trump look like self-pampering days at a spa.

It isn’t that Scotland is somehow better so we won’t make such a decision. It isn’t that, somehow, Scotland is not capable of making bad decisions. Rather, at this time and place, there is little in our recent – and not so recent – history that would suggest we are about to besiege ourselves with a wave of destruction.

Because the fact is this. We are not engulfed by anxiety and crumbling identities as England is. We are not having to come to terms with a lost empire and a stark reality check of our ordinariness. The fact that we overwhelmingly voted against a very English Brexit is testimony to that.

On the contrary, I would suggest that Scotland’s recent history points to a self-aware, confident and innovative society. This is summed up by a Norwegian academic who noted that, in terms of social justice and green technology, Scotland is undergoing a second Scottish enlightenment. It is worth taking a minute to think about this. It still blows my mind thinking that people see Scotland like this.

We are seen, not as a nation struggling for an identity, nor as a nation in crisis, or a nation plumbing to the depths of despair. But as a society developing a secure, progressive and positive culture, looking ready to scale the heights of progress and innovation. It is this positive push forward that would make it unfathomable to voluntarily join the chaos and crisis of our neighbours then.

That isn’t to say that independence is inevitable. Anyone who knows history knows that it often throws us a curve ball. It is just that if we did choose to remain part of the UK, it would go against all the markers of Scotland’s recent historical development. It would sit against decades of our development as a nation outside of and separate from England.

READ MORE: ‘Independence it must be’: Mastermind behind ‘The Vow’ switches from No to Yes

There was a lot of talk about a tipping point for the move towards independence last week. After the SNP MPs walked out of Parliament a sense of the movement being catapulted forward was clear. The demonstration in Glasgow gave a similar sense of movement.

Reflecting on Scotland over the last century has seen an emerging new Scotland that sits increasingly separate from our English neighbours; in society, culture and in politics. Brexit has only increased this separation, as Scotland gains confidence and strength against a deepening English crisis.

That doesn’t make independence inevitable. But if you were sitting reading a potted history of Scotland over the last century you’d probably be pretty sure where the next chapter leads. Because I really canna see a path that doesn’t lead to independence.