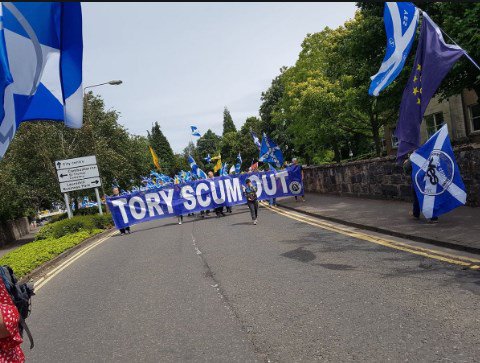 CommonSpace columnist Siobhan Tolland weighs in to the debate about the Tory Scum Out banner at the All Under One Banner independence demonstration in Bannockburn on Saturday [23 June], arguing that it presents the wrong image of the independence movement and should not be on future marches

NOTHING fills your heart with joy more than thousands of people celebrating and marching for an Independent Scotland. Nothing fills my heart with utter despondency than people marching behind the banner saying Tory scum. I couldn’t make the march. But my heart sunk when I saw the banner on social media.

I really amn’t sure where to begin. I understand the sheer inhumanity of the Tories. I see the horror their policies have left in their wake. Hell, I even wrote an article once about the Tory conference being the four horses of the apocalypse. I get the anger and frustration and powerlessness that people feel. And I get that, often, language like this spills out from that sheer frustration and powerlessness.

It is just the group who made the banner are very controversial and divisive, actually. Siol nan Gaidheal, seem to see our society in ethnic terms that really make a lot of people – myself included – very uncomfortable. Their website, for instance, talks about the Anglo Saxon replacement of our Scots population – a real Scots population they are pains to note.

This notion of a blooded purity of Scots is the exact opposite of the YES movement’s general ethos. And even though they are such a small group and have absolutely no influence within the wider organisation, their ethos does leave a somewhat bitter taste with many of us.

It isn’t just the authors that cause some concern, however. But the Tories ARE scum, I hear people say.  The old saying you catch more flies with honey than vinegar is clearly lost. Think of the context here. The site of the march, Stirling, voted an overwhelming NO in the last independence referendum.

In addition to this, the Conservatives made significant gains in the Stirling council elections to be the second largest party, and just overtook the SNP at the general election last year. Stirling now sits with an increased Tory support as well as an MP. This is a Tory leaning area that voted No in the referendum.

This is not just specific to Stirling. Significant pockets of Scotland, Aberdeen being another good example, who are Capital and small ‘c’ conservative are more generally scared of the prospect of independence. Now, how do we persuade people that independence is for them? I know. Let’s call them scum. Brilliant idea. Sorted, and let’s look forward to the next demonstration where they get called scum again.

Sometimes, when things are important, we need to put aside our personal feelings, suppress our immediate emotional response and think about what is best for the goal we are trying to achieve. Sometimes, we just need to bite our tongue for the good of the movement. It’s kicking in the filter between brain and mouth. Calling people scum will never win people over. Putting it on a huge fuck-off banner even less so.

READ MORE – Siobhan Tolland: Everything I know about history tells me Scotland’s next chapter will be independence

Are we not supposed to be a positive movement? I mean, isn’t that our thing? Isn’t that the defining factor of us that people respect across the globe? We are an inclusive nationalism! We are a positive nationalism that does not thrive on division and petty name calling. Aren’t we supposed to be the new politics – away from the auld political shoutiness that people are sick to death of? A banner saying Tory scum – any scum to be honest – is surely the old politics, and it needs to be left behind.

I keep saying this but I genuinely believe our movement is poised on the edge of great power. We are (in historical terms) the emergent power and independence is almost here. You can practically touch it. This is not 2014 where we were sitting thinking, wouldn’t it be nice if were independent. This is planning, preparing and strategising for when we become independent. It’s a whole world of difference.

That means that the movement we are now will determine the early years of an independent Scotland. Elliot Bulmer once said that to win independence we need to think independence across all party political lines. Independence is for all parties and none. If we are to build a modern thriving democracy then our movement needs to reflect the broad political spectrum that exists. It has to exist above and beyond petty party politics.

READ MORE – Siobhan Tolland: Launching the Indy Pledge – a code of conduct for the Yes movement

We need to encourage all parties, and none, to imagine independence. To feel the momentum and inevitability of it and plan for it. Independence is far broader than party politics. It’s about a whole nation building something. We might not like the Tories and, yes, their record is despicable. But it’s only a functioning democracy if all parties are part of this process.

I was happy to see that AUOB requested this banner not to appear at future marches. And Cameron Archibald’s open letter was a very moving account – reflecting the inclusiveness Scotland wants to be.

But as more marches are planned, I ask that we keep this momentum up through local group’s approaching AUOB organising committees to ensure the banner is not present. I know some committees are already doing this.

This is a test for our movement. It’s one of these moments we anticipated when developing the IndyPledge. How we deal with this problem will determine the type of movement we evolve into. The Scotland we create. Let us ensure that our marches show the positivity, inclusiveness and tolerance that we know we possess. Or at least stop with the petty name calling.