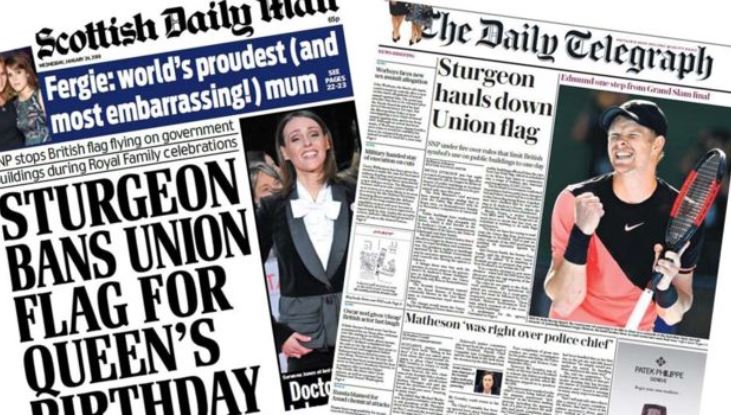 IT’S been a fair fiasco for the Telegraph, Daily Mail and the Express. With the backing of Theresa May and David Mundell, you cannot find better examples of a screeching, screaming union.

Of course, the “refusal to fly the British flag” story spectacularly failed. Lies are less effective when screaming froth hangs from each word on the page. But for a few days, those words of venom and fury scatter-gunned across the UK: the allegation that Sturgeon was rectricting the flying of the union flag in Scotland was seen as practically an act of war against the union.

“That Nicola Sturgeon – she hates us – Britain,” says the sub-text. What a right disgrace she is. She hates us. She’s trying to destroy us. We demand that she loves us! We demand Scotland loves Britain!

This incident tells us so much, though. True or not, that story tells us the British state is shitting it. It really is. And the ante has been upped ever since the Scottish Government published its report on Brexit two weeks ago – you know, the one that confirmed just how bad it’s all going to be, folks.

We had the royals announcing a Scottish title for the new wedding couple. And we had May going to a Burns supper. It was as though someone said “quick, throw them a unionist bone – tell them the union loves Scotland. Look, we love you. And May loves yir haggis!”.

Alongside the clumsy fumbles of love, of course, is the aggressive demand of love for Britishness: “Love us back! Now. Right now! Fly our bloody flag you wee poisonous bitch.”

Because that is what our first minister of Scotland gets called on media forums. That is the level of aggression Britishness now takes on.

As the Brexit report laid bare the choices for Scotland and made independence seem a damn sight more attractive, we were met with an onslaught of Britishness that smothers us with a faux love and chokes us with visceral hatred- all at the same time.

Deep seated in England’s current crisis is a complex contradiction of a subconscious understanding that its empire status is crumbling alongside an aggressive retreat into that very same identity.

But all these events tell us so much about the psyche of the British state. German history scholar Nicholas Boyle explains that Brexit is an English psychosis born of the trauma of “imperial amputation” and their inability to come to terms with their identity – as one of equals – beyond their imperial collapse.

Deep seated in England’s current crisis, then, is a complex contradiction of a subconscious understanding that its empire status is crumbling alongside an aggressive retreat into that very same identity.

This is why Scotland is even more important now. It’s not just the economics of negotiating Scotland’s assets away during the EU negotiations- important though that is. Keeping Scotland is the last remnant of that empire identity they are so desperate to cling on to. An identity that defines the British state’s very sense of being.

Scotland’s threat to leave that union shatters the last vestiges of this empire illusion. If Rule Britannia canna even rule Scotland, then what is Britain? And as the last of its imperial subjects, the need for us to be British becomes all the more important. Fly the British flag, godammit! LOVE US!

I used to work in a place where, if they had any problems, they would just throw more managers at it. More and more and more managers. It’s similar for the British state with its Britishness. The more in crisis it becomes, the more Britishness is thrown at it, as if it’s the all-encompassing elixir for every single domestic and global problem.

This is why Scotland is even more important now. Keeping Scotland is the last remnant of that empire identity – an identity that defines the British state’s very sense of being.

But Brexit only revealed Britain to be nothing more than another has-been empire collapsing in on itself. And Britishness becomes a sad vacant sigh of a long gone yesteryear. It’s the drunk in the bar forcing everyone to listen to his glory days when all people see is a sad wee drunk in a bar. But this sense of Britishness is all they have now.

Brexit has shown the real depth of the economic, political and social crisis that England is experiencing, with no tangible rescue plan. And so all that’s left is the image of Britain as the imagined ‘glory days’.

And this is what this flag incident represents. It sees a state in pure panic lashing out and aggressively demanding we love our British imperial masters. It’s the British state stomping its feet and wailing like a two year old demanding that we love it.

And underneath all that explosion of Britishness is – well- nothing. And that’s the point, really. It’s an empty shell of a past identity completely disconnected from today’s reality.

The more the British state pushes that identity onto us – ever more aggressively – the more they realise that it’s gone. That Britain is gone.

The more the British state pushes that identity onto us – ever more aggressively – the more they realise that it’s gone. That Britain is gone.

That doesn’t mean the struggle is over. Far from it. Any beast in panic lashes out for its life and the British state is no different. Let’s not underestimate what is happening here – the British state really is fighting for its life. And if we think the flag incident is bad, fasten yir seat belts, because this is going to be a rough ride.

But, when all is said and done, if all the British state can do to save its life is build an aggressive army of Britishness then there is really nothing left for the union.

So, let us not get sucked into the vortex of a dying union demanding that we love it. Let’s focus on building the independent Scotland we will inevitably become. 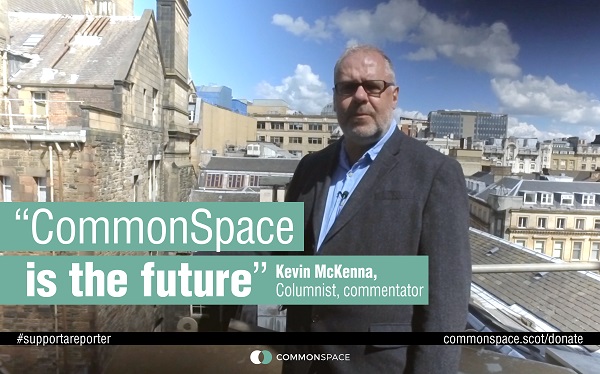