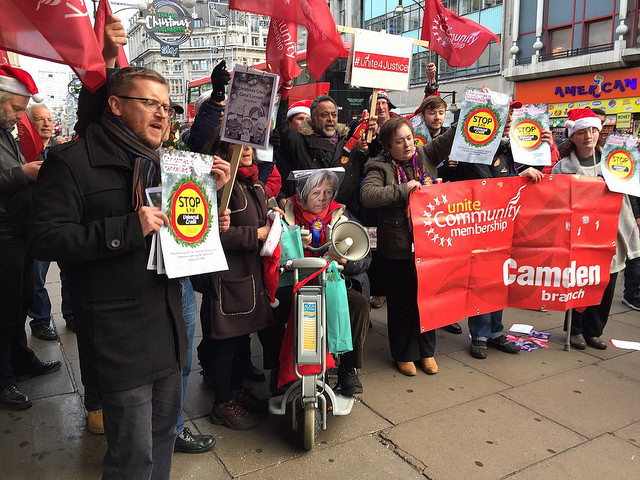 The Severe Disability Premium thousands of disabled claimants have been missing out on for six months is worth £64.30 per week

SNP MP Carol Monaghan has written to DWP Secretary Amber Rudd for a second time calling on her to immediately initiate disability back-payments which had been promised by the previous DWP head, but six months later have not been delivered.

Rudd, who delayed a vote on Universal Credit in the House of Commons earlier in the week, postponing a roll-out of the much criticised new benefits system to three million Britons, is under pressure to deliver for those who have lost out from the delay in the managed migration provisions. The provisions contained a commitment to-back-payments for the estimated 7000 claimants who have been moved from the legacy system to Universal Credit. The Severe Disability Premium (SDP) is worth £64.30 per week to each claimant.

The regulations contained provisions to ensure claimants with SDPs would not be moved over to Universal Credit without transitional protection, a commitment that has been broken by the delay.

Esther McVey MP, who resigned in December as DWP Secretary over opposition to the prime minister’s Brexit deal, had committed in June 2018 to paying those who had lost out from the shift.

Monaghan, who had raised the issue in a letter before Christmas with Rudd, commented: “It is simply unacceptable for thousands of disability claimants to be waiting for what they are due for six months. The Tory Secretary of State has completely ignored the promise made to 7000 claimants six months ago that back-payments would be made to compensate for losing out under the Severe Disability Premium – and has provided no assurances as to when they will receive their payments.

“As a direct result of Amber Rudd’s decision to sit on her hands, people are continuing to lose out day after day on money that the Tories promised them – all because the UK government has failed to implement these protections.

“For the sake of thousands of people across the country, I urge the Secretary of State for the DWP to initiate back-payments immediately for claimants moved to Universal Credit, put in protection so those moving via natural migration don’t continue to lose out, and correct this horrific injustice.”

A DWP spokesperson has said that they “remain committed to implementing protections for people in receipt of Severe Disability Premium”, but did not put a timeline on when that would happen.

The Work and Pensions Committee has pressured the DWP to separate disability payments from the main vote on Universal Credit roll-out to avoid anyone else suffering the same payment problems.

That vote has been changed to ask MPs to agree to transferring just 10,000 people to the new system, with Rudd fearing that she faced defeat in the House of Commons.

The DWP Secretary told parliament: “I will want to consider carefully when I bring to the House the vote for the three million managed migration, which is scheduled for 2020. I’m still considering when to do that.

“The 10,000 pilot as always, which was announced some time ago, informs us how we do that.”

READ MORE – Hilary Long: The UN’s findings on poverty in the UK reveal the rotten heart of Tory Britain

The roll out of UC, which combines together several benefits into one, has now reached every Job Centre in the UK, but millions are now in a waiting game to see if they too will be transferred over, a process which includes a five week waiting period which charities and opposition parties say has pushed thousands into extreme hardship.

Responding to a question from Tory MP Heidi Allen, who said the five week waiting period should be scrapped, Rudd indicated she would be looking for more funds from the Treasury to make further changes to the benefit.

“There are many contributions to how we can improve Universal Credit, some of them carry quite a big price tag to them, some of them have had more success with the Treasury than others.

“And I’m looking forward to further conversations with the Chancellor myself in due course.”

“British compassion for those who are suffering has been replaced by a punitive, mean-spirited, and often callous approach,” Alston said. “There is such a gender dimension to these welfare reforms that if you got a group of misogynists in a room and said how can we make this system work for men and not for women they would not have come up with too many ideas that are not already in place.

“I asked the ministers I spoke to if they thought there was a gender dimension to these proceedings and they said no. 90 per cent of lone single parents are women so who do you think comes out worse in these reforms? Lone single parents.”