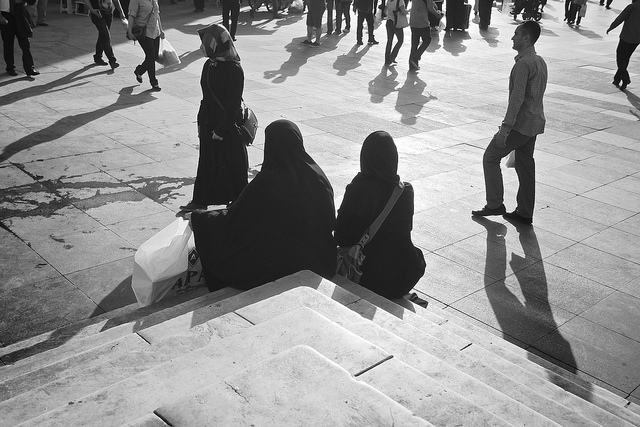 As Boris Johnson faces accusations of pandering to the far-right with his comments on Muslim dress, Smina Akhtar argues that the prejudice faced by Muslim women extends far beyond one buffoonish Tory

FEW would deny that whilst Muslims as a community have been subjected to various types of racism – in the form of hate crime, institutional racism and racism at the hands of the state in the form of immigration policies, counterterrorism, greater surveillance – Muslim women have been singled out for a racism which is defined by their gender.

As hate crime against Muslim women increases, Boris Johnson, the former Foreign Secretary and tipped by many to be the future Prime Minister, has this week described Muslim women who wear the burka as looking like “bank robbers”, arguably in an attempt to win the support of the right of his party as well as the far-right in general.

Gendered racism can’t be separated into either sexism or racism; it is a concept and experience in its own right. The aim of this short article is to examine what gendered racism looks like and discuss why it is used as a weapon by the state.

If we take the case of Islamic dress and particularly the burka, state institutions in Britain, many European countries and America have used it to construct a narrative of the Muslim woman not having the freedom to choose what she wears, which is then contrasted with the idea of the ‘free’ Western woman, perceived as having freedom to choose.

One way to challenge this is to question the extent to which the pressure on Western women to conform to fashion is in fact a real choice, or is actually determined by what is considered the norm or expected behaviour.

If we take the case of Afghanistan, historically, the wearing of the burka far from being a symbol of oppression and forced upon women was in fact a sign of belonging to a respectable family and used by women to protect themselves from harassment when they went outside the home.

Many Muslim countries currently force women to wear it, which most people would consider to be problematic. We need to be careful when developing an appropriate position to take on the issue. Whilst we should oppose the state legislating on women’s dress, we should also recognise that western states are using racism to argue that Muslim women need to be saved, which is equally oppressive.

Europe has been the stage where the importance of Muslim women within state discourses has been played out. Whilst Muslim men are defined as a security threat, Muslim women are seen as needing to be saved from their repressive religion, oppressive male members of their families and from their excessive clothes, but at the same time are perceived as potential allies of the state in the fight against terrorism if only they conform to British values and leave behind some of their visible ‘Muslimness’.

Women are seen as key in tackling extremism through their roles as mothers but there is a narrative within the War on Terror which defines the good Muslim mother as one who speaks English, is integrated into British society and is not veiled.

READ MORE: Yvonne Ridley: Should parliaments get to decide what women wear?

Britain’s counterterrorism funding has attempted to bring women on board often through civic participation programmes and by arguing that they would be better integrated if only they learned to speak English, ignoring the fact that the vast majority already do speak English.

The attempts to integrate, to make these women more British is setback if these women dress differently. This story is told throughout western Europe, with various politicians in a number of countries calling for women’s Islamic clothing to be banned, including in the UK.

France is a useful example to use to demonstrate how this battle has been played out because it was the first country in Europe to ban the burka/niqab and then set out to ban the burkini. Attempts to implement the burkini ban were reported nationally and internationally showing the police visibly trying to make Muslim women undress on the beach thus demonstrating just how far the state is willing to go to stop Muslim women from dressing in a visibly Islamic way.

Banning the burka and burkini were supported by both extreme right-wing nationalist groupings, white feminists and allies who seemingly represented progressive voices on the centre and left. Though each rationalised their positions differently, the stance taken by the right-wing nationalist was an anti-Islamic one whilst the left and feminist narrative was one opposing anti-male oppression.

Other European countries have followed France in banning the burka and those same discourses are present in Britain with regular private members bills calling for the banning of the burka and we mustn’t forget that the former home secretary Jack Straw refused to see a constituent because she was wearing a face covering. OFSTED which regulates schools in England has said also that individual headteachers have the right to ban the hijab (head covering) in their own schools.

These gendered forms of racist discourses are adopted by governments in order to justify international wars with Muslim countries as well as state racism in the form of counterterrorism policy and immigration and settlement policies at home.

Muslim women are presented as the victims of sexist practices by Muslim countries and Muslim men are accused of controlling their women by committing ‘honour’ crimes, forcing them to cover themselves and to marry against their will. It is argued that such practices take away the freedom of choice from women. The narrative of “saving” Muslim women is then utilised within state discourses, laws and state violence at home.

The state gives Muslim women centre stage within the War on Terror as its potential allies, thus attempting to appropriate feminism for its own agenda. The battle to draw women in has been fought around their Islamic identity which has often been defined in relation to how Islamic they look. Victory for them will be measured partly by the extent to which Muslim women give up their Islamic dress and conform to Britishness.

Smina Akhtar is a PhD student in the Department of Sociology, at University of Glasgow