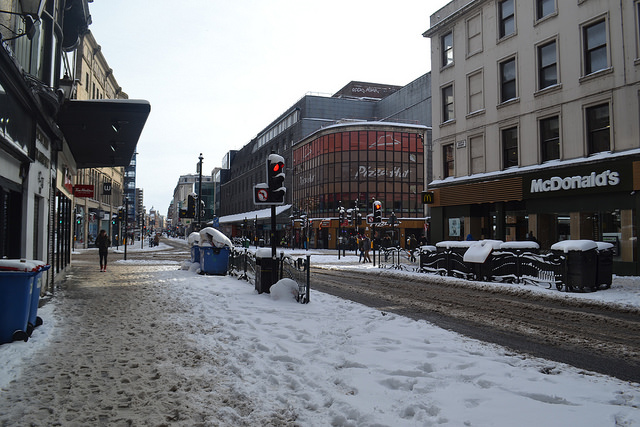 A NUMBER OF big names in business, including McDonald’s, KFC and Deliveroo, have been criticised for remaining in service through severe weather alerts from the Met Office, forcing workers to make their way through potentially treacherous conditions.

Workers’ rights campaign Better Than Zero said it had recieved a flurry of messages from workers who felt forced or pressured to work through the snow, despite Scotland facing its first ever red alert for snow over Wednesday evening and Thursday morning.

An amber alert remained in place until 10am on Friday 2 March, with the Met Office, Police Scotland and Transport Scotland advising only to travel if absolutely essential.

The Bakers Food and Allied Workers Union (BFAWU) has been working closely with Better Than Zero to ensure that the safety of staff in Scotland’s fast food industry is prioritised by employers following complaints from staff that various McDonalds and KFC restaurants remained open against advice on Wednesday.

As a result, the union has celebrated success in uniting workers to force stores to close in a number of areas.

Barclay McCrindle of BFAWU told CommonSpace: “By 1pm yesterday we managed to speak to the manager of the McDonald’s at Livingston who agreed to close.

“The KFC, however, was refusing and it got to the point that all the staff – whether in a union or not – signed a letter saying they were withdrawing their labour, and they then agreed to close at 4pm. If the workers hadn’t have done that, they probably wouldn’t have shut the store.

“The McDonald’s at Trongate didn’t close the store until 6pm, and one worker didn’t get home till 11pm at night – it took her over five hours to get home. We’ll be putting in a grievance for her.”

He continued: “Considering that management knew from much earlier in the day that there was going to be a red alert, and we had been on the phone since 11am, it shows that there was no thought to the safety of workers.

“I can understand when it comes to essential services, but we’re talking about fast food services. Sometimes workers’ safety has to come before profit.”

McCrindle said that some workers had advised him they were told they would only be paid until the stores had to close, a matter which the BFAWU intends to take up with the employers.

READ MORE: Cold boss: Has your employer treated you unfairly during the bad weather?

KFC and McDonald’s stores in various parts of Scotland, including Livingston and Trongate, remained closed on Thursday and into Friday.

A McDonald’s spokesperson told CommonSpace: “The safety of our crew and restaurant teams is absolutely our number one priority, and where the weather conditions are particularly extreme a select number of restaurants in Scotland [had] already been closed [on Wednesday evening].

“Where concerns have been raised by our people to stores and franchisees we have reassured them not to travel into work. We have also provided guidance to all of our restaurants regarding the weather warnings and would encourage any of our employees with queries to speak to their manager, and to keep checking their local weather forecast for developments which may impact them.”

A spokesperson for KFC said: “Guidelines have been shared every day this week to remind and empower our area and restaurant managers to always put the safety of their team first. In response to Wednesday’s MET office warnings we issued adverse weather guidance to all restaurants, however, our regional teams make the decision on the timing of restaurant closures based on local conditions.

“The Livingston restaurant was closed at 3pm on Wednesday and all team members are safe, however, we accept that it might have been better to close earlier in this case.”

Scottish Green MSP Ross Greer has put delivery company Deliveroo under fire for re-opening on Thursday morning after the red warning lapsed, noted that an amber alert still carries a warning of “risk to life and property”.

Greer said: “If the safety of Deliveroo riders is of paramount importance, then as a responsible business, they should have immediately suspended in all areas affected by red and amber weather warnings, in keeping with advice from Police Scotland, Transport Scotland, the Scottish Government and others.

“This situation is a stark reminder of the conditions exploited, ‘casual’ workers experience in the so called ‘gig economy’.” Scottish Green MSP Ross Greer

“I’m not convinced the company is taking safety seriously. For those in casual work, who are not paid if they do not turn up, the ability to stave off eviction, to put food on the table or cover energy bills is of serious importance. Indeed, many will feel they must put these issues ahead of their relative safety.

“As a business, Deliveroo has a responsibility for rider wellbeing and I hope they begin to take it seriously. This situation is a stark reminder of the conditions exploited, ‘casual’ workers experience in the so called ‘gig economy’.”

Deliveroo advised CommonSpace that the company’s policy is such that workers can choose when to take or reject orders and that their work with the company is not affected by this. Additionally, during adverse weather conditions, delivery distances are reduced and the rate of pay is increased to allow workers to drive more slowly.

A spokesperson said: “Rider safety is a priority for Deliveroo. Where bad weather is severe Deliveroo stops operating. In other adverse conditions we change our operations to protect riders and ensure they can still earn well if they do choose to ride.

“Riders are at no point obliged to ride with us and can at any time reject an order if they wish. Deliveroo wrote to affected riders [on Wednesday] to remind them of this and to urge them to stay safe.

“Deliveroo will continue to monitor the weather conditions, act wherever necessary and remain in close contact with riders.”

The Scottish Trades Union Congress (STUC) has launched a survey to gather more information on how workers have been impacted during the weather warnings and which organisations have potentially breached their employees’ rights.