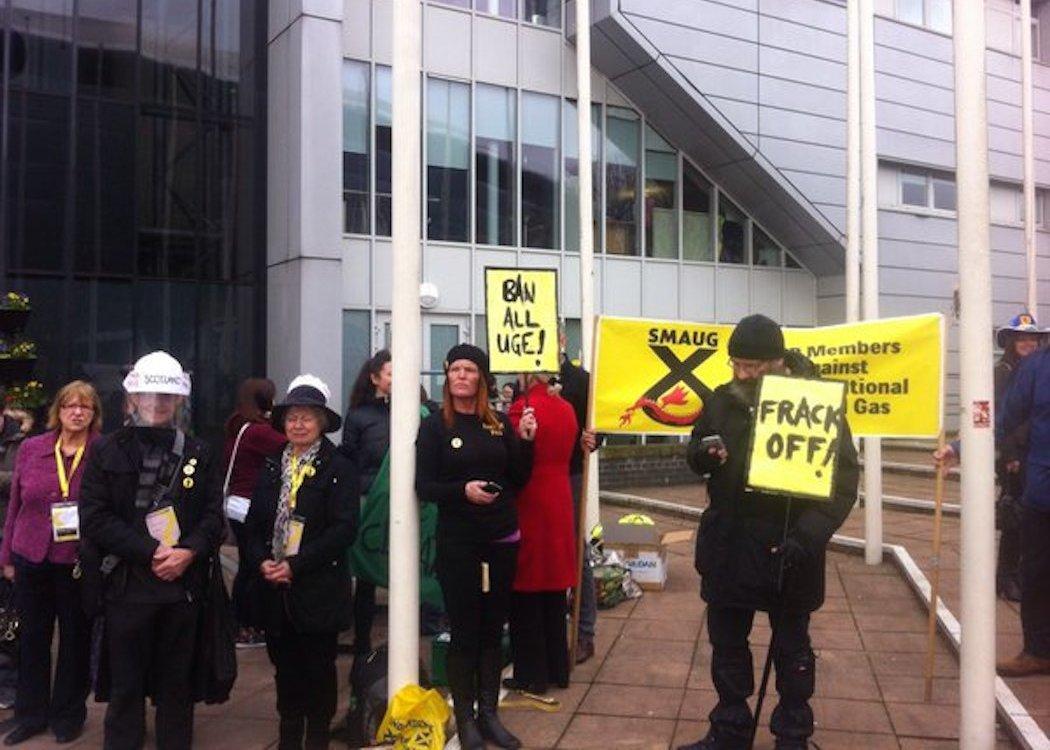 SNP SUPPORTERS challenged the party’s leadership to move towards a full ban on the controversial fracking technology outside the party’s conference this weekend.

Smaug (SNP members against underground gasification) called on the Scottish Government to stand firm against lobbying attempts to give fracking drilling the green light, warning of the health and environmental risks of fossil fuel extraction.

Pressure from within the SNP led to a temporary moratorium on fracking while further research is carried out. Campaigners want the party to extend the moratorium towards a full ban.

SNP supporters Linda Jamieson, a retail worker from Cumbernauld, and Neil McLean, from Falkirk, were two of the campaigners at the entrance to the conference.

McLean told CommonSpace: “I’ve always cared about the environment. It’s craziness to consider any industry that’s going to take huge risks. It’s been proven around the world that fracking causes mass contamination to the environment and the health of the local communities that it’s taking place in.

“I would like the SNP leadership to take into account what’s happening around the world. I’m fully aware of the possibilities of fool’s gold for the economy. I would hope they would see sense and ban it.”

What is happening with the SNP and fracking?

Jamieson also wants the party to put the environment before the interests of big multinational companies like Ineos.

“I think people are misinformed and you need to dig a bit deeper to get the right information. That’s why I’ve gone to meetings and protests,” she said.

Friends of the Earth Scotland head of campaigns Mary Church added: “Fracking and unconventional fossil fuels are a key battleground in the forthcoming Holyrood elections. At the moment most of the parties seem to be trying to outdo each other to be the most anti-fracking, which is of course great news for the environment and communities threatened by this risky industry.

“The turnout today demonstrates the strength of feeling of SNP members and the population in general against this unwanted and unnecessary industry. Voters around the country will be holding politicians to account on this important issue both at the ballot and in the months following the election, building unstoppable momentum for an all out ban.

“While the current moratoriums prevent shale gas, coalbed methane and underground coal gasification development in Scotland at the moment, pressure is mounting for an all out ban. It is our view that a fair and balanced analysis of the evidence will demonstrate that the only sensible course of action for the next Scottish Government is to ban unconventional fossil fuels.”

First Minister Nicola Sturgeon recently said she was “highly sceptical” about fracking, following support for a full ban from the Scottish Greens and the Labour Party.