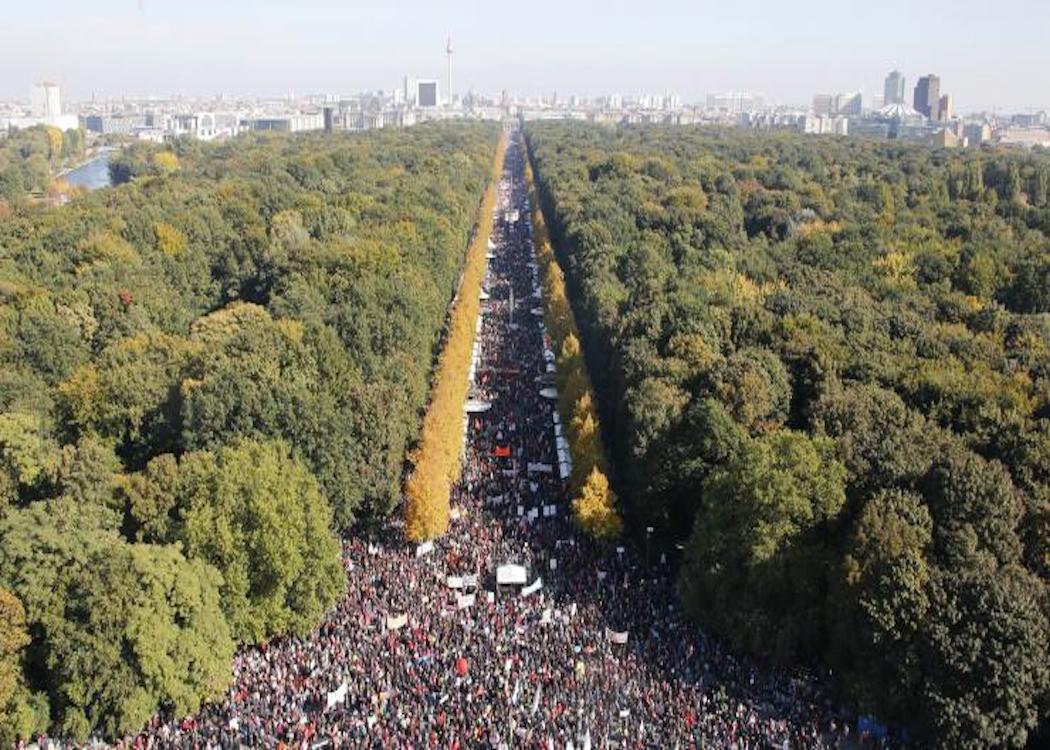 Campaign group warns that deal is a threat to democracy, social justice and the environment

THE SNP SHOULD declare its full opposition to the controversial Transatlantic Trade and Investment Partnership (TTIP) deal, according to campaigners at the party’s national conference.

TTIP has been criticised as a back room deal giving privileges to big business, undermining decades of social and environmental policy.

Party activists have been putting pressure on the SNP and other major parties for over a year to strengthen their resolve against the proposals, although most power (including the right of veto) is held by the pro-TTIP Tory government at Westminster.

Nick Dearden director of the Global Justice Now campaign welcomed the SNP’s opposition to the industrial disputes settlement part of TTIP and called on the party to go further and oppose the whole deal.

TTIP: What it is and why people want to stop it.

“I want the SNP to oppose TTIP completely. There is nothing good that can come out of this agreement,” Dearden told the fringe.

“It has nothing to do with free trade. It’s not about you selling me beans and I sell you bananas. It’s about giving power to corporations and big business. It’s about changing the rules of the global market.”

Dearden pointed to the massive march of a quarter of a million people in Berlin and millions of signatures gathered against the deal as evidence of public opposition to a corporate trade deal.

The SNP passed a motion at its conference calling for all public services to be excluded from any possible privatisation measures in the partnership. First Minister Nicola Sturgeon has for the first time called on the UK Government to veto the deal if the NHS is not given protected status.

However, many anti-TTIP activists inside and outside the SNP want the party to go further .

Scottish Green Party leader Patrick Harvie, reacting to the motion, said: “To protect only public services like the NHS misses the point. It is a corporate power grab that threatens workers’ rights and public protections, and undermines local businesses by letting big companies determine the rules of the game.

“Scottish Greens are clear in our total opposition to TTIP.”

Many SNP activists and party representatives did criticise the corporate element of the dispute settlement element of TTIP, including European parliamentarian Alyn Smith MEP.

“I am not going to say now that I will oppose TTIP come what may. That would not be responsible as someone trying to get the best deal.” Alyn Smith, SNP MEP

Speaking at a packed fringe debate on the proposals, Smith called for a nuanced position that allowed himself to challenge the proposals from within the parliament: “I have respect for Global Justice Now, but I am not going to say now that I will oppose TTIP come what may. That would not be responsible as someone trying to get the best deal. I’m not going to tie my hands over a negotiation process that is still a work in process.”

Smith claimed he would “lose influence within the parliament” as part of the European Parliament that will decide the outcome of the negotiation process.

Originally the motion did not specify its protection for all public services, but was then improved by SNP activists.

Moira Mackenzie of the St Andrews SNP branch and a supporter of the amendment told CommonSpace: “We felt the motion as it stands isn’t nearly strong enough. This is a huge threat to democracy and it needs the strongest condemnation we can give.”

This week the New Economics Foundation published new evidence that the UK Government was leading a corporate power grab of business regulation.

Further negotiations on TTIP will take place in the European Parliament over the next year.