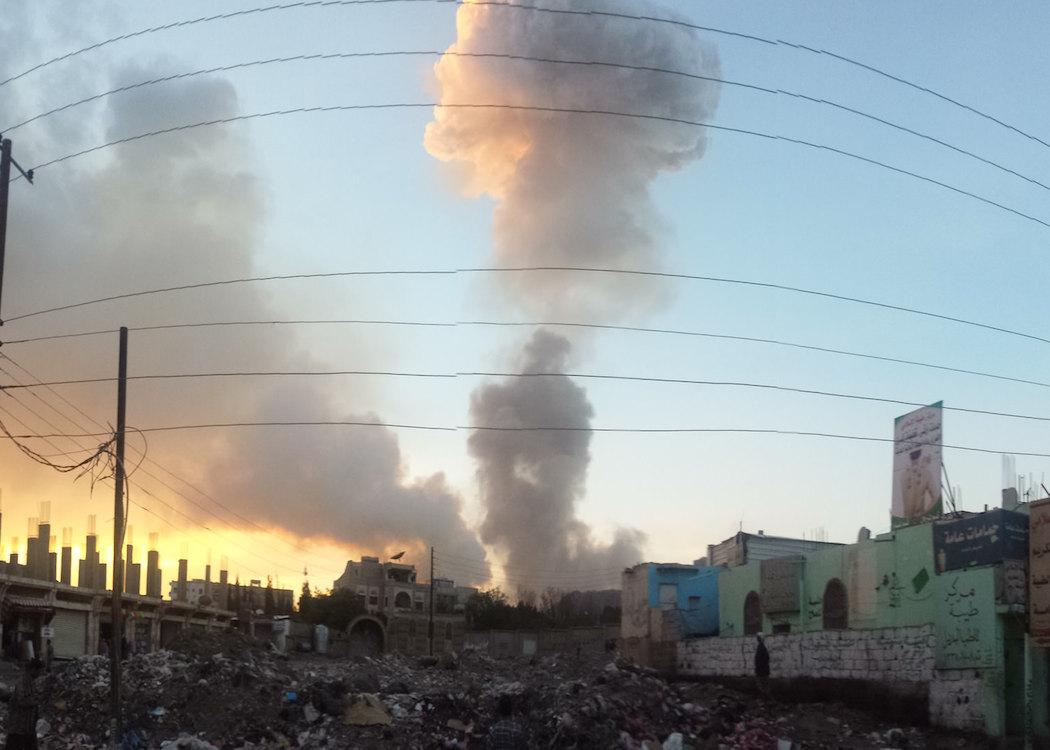 BOMBINGS of schools and hospitals in Yemen by the UK’s top arms sale recipient, Saudi Arabia, was placed under increased scrutiny in parliament yesterday [Tuesday 5 January] by Scottish MPs.

The humanitarian crisis in Yemen, where 21 million people require emergency aid, is being exacerbated by a Saudi Arabian-led bombing campaign and blockade which includes examples of reported war crimes.

Legal firms are preparing a case against the UK Government for its continued sales to Saudi Arabia, on the basis that some of the multi-billion pound sales are in breach of international humanitarian law .

The pressure on UK arms sales follows the recent execution of 47 Saudi prisoners, in the biggest mass judicial killing by the Gulf dictatorship since 1980.

Tobias Ellwood, the Tory minister for the Middle East, had said he was “disappointed” following the mass executions, but defended the UK’s relationship with the extremist regime.

However, half a dozen SNP MPs pressed the minister on the ongoing catastrophe in Yemen and the multi-billion pound arms deals that underpin British cooperation with the Gulf state.

Tasmina Ahmed-Sheikh MP claimed the UK Government was losing credibility on human rights as a result of the deals: “The Independent recently reported that a legal adviser to the foreign secretary stated that it was ‘not at all clear’ whether UK weapons sold to Saudi Arabia have been used on civilian targets in Yemen, and a recent legal opinion published by Matrix Chambers has further cast doubt on the government’s action. I await a response from the minister to my letter of 3 December, in which I asked for specific reassurances from him that international arms treaty laws have not been breached in the sale of these weapons. I hope he can use this opportunity to give that reassurance to the house.

“At the same time, the minister should texplain why the work of this government on the export of weapons and military equipment has not been subject to proper parliamentary scrutiny by the Committee on Arms Export Controls. Why have they been reluctant to have transparency on this vital matter?”

Ellwood did not respond directly to Ahmed-Sheikh’s question on Yemen.

Patrick Grady, MP for Glasgow North, pushed the point, adding: “Both Amnesty International and Save the Children have recently produced reports on the conflict in Yemen, expressing concern that UK-sold arms are being used by the Saudi coalition in breach of international human rights law. Does the minister accept that if that is the case, the UK could be found to have been complicit in war crimes? What steps is he taking to investigate those reports and make sure that that is not the case?”

Ellwood responded: “The honourable gentleman is asking me a hypothetical; I am not going to go down that particular road. I will say, as I have repeated, that if there is genuine intelligence evidence to suggest that weapons systems — not just in this country, but anywhere — have been abused, our robust export licence scheme will absolutely kick into place.”

Dr Philippa Whitford, MP for Central Ayrshire, raised a specific reported case. Amnesty International has identified war crimes carried out in Yemen, including the targeting of civilians and bombing of schools.

Whitford asked: “The minister says that any incidence of the use of British weapons against civilians in Yemen will be investigated. Is the bombing of the Medecins Sans Frontieres hospital in the Saada region being investigated, as Saudi planes were identified as having been involved?”

Ellwood replied that “collateral damage [killing of civilians by the military] having taken place, the necessary compensation has been paid. That is the correct process.” Whether this incident will be investigated remains unclear.

Margaret Ferrier, Rutherglen and Hamilton West, criticised the ministerial response: “We have seen a very weak response from the UK Government tonight. We find ourselves allies to one of the world’s biggest human rights abusers.”

Peter Grant, MP for Glenrothes, added: “We are discussing a brutal and violent outrage perpetrated by an unelected dictatorship against its own citizens, and the public record will show that the minister chose to say that he was very concerned about the reaction to that outrage before he even mentioned the outrage itself. Given that we are dealing with a regime that has made it perfectly clear that it is more than willing to murder its own citizens, not, in a phrase that will be familiar to the minister, because of anything they did but because of who they were, does he accept that if the rules on arms sales allow such a brutal regime to receive arms from the United Kingdom, then those rules have to be changed with immediate effect?”

There remain no plans to alter UK guidelines on arms sales or a to conduct review of complicity in reported Saudi Arabian war crimes.

Andrew Smith, a spokesperson for the Campaign Against the Arms Trade, said: “UK bombs and fighter jets have been central to the destruction of Yemen. As long as Saudi enjoys the political and military support of the most powerful Western nations, then it will continue oppressing its own population and those of neighbouring states.”