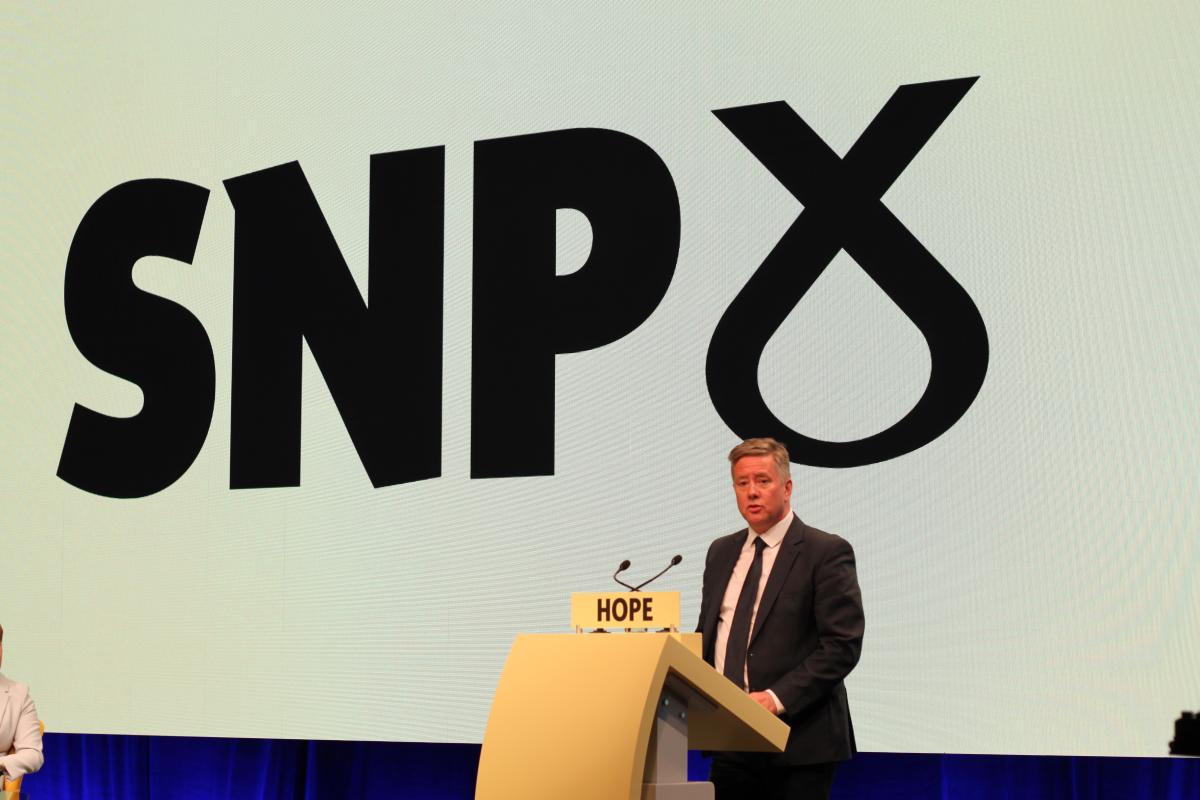 THE SNP CONFERENCE in Edinburgh today [27 April] saw the party membership narrowly vote to amend a motion which would have endorsed the Sustainable Growth Commission’s recommendations on currency, and instead demand the rapid introduction of a new Scottish currency after independence.

The development signals a partial rebuke of the position endorsed by the party’s leadership, including First Minister Nicola Sturgeon, who advocated keeping the pound for a period of years after the advent of independence, with a new currency only to be introduced if six economic tests were met – requirements that some independence activists have argued are unachievable.

In the wake of Sturgeon’s announcement this week that she would attempt to secure a second independence referendum before the end of the current Scottish parliamentary term, the issue of currency in an independent Scotland has taken on greater urgency, with divergent views within the SNP coming to a head in the heated debate which preceded this afternoon’s vote.

In its original form, the motion states that the currency of an independent Scotland “should continue to be the pound sterling” until an independent currency “can be safely and securely established”, with Holyrood making the final decision on whether or not to establish such a currency “by the end of the first term of an independent Parliament,” based on reports from a Scottish central bank.

However, the successful amendment – which passed by 781 to 729, following the defeat of two similar amendments, which would have offered a more comprehensive repudiation of the Growth Commission’s currency recommendations – commits an independent Scotland under the SNP “to authorise the preparation of a Scottish Currency as soon as practicable after a vote for Independence with the aim that the currency be ready for introduction as soon as practicable after Independence Day.”

Following the membership’s vote to amend, the motion passed unanimously, however questions remain over the implications of its newly modified status. While the controversial six tests for establishing a Scottish currency technically remain, SNP delegate Dr Timothy Rideout – the speaker who put forward the successful amendment – offering a withering critique of each of the tests, characterising them as “rubbish” that leave Scotland vulnerable to economic crisis.

Dr Rideout argued that so long as an independent Scotland employed Sterling, the nation’s entire monetary policy would be set in London, saying: “The result is clear – we would not have real independence, and EU rules mean that, without your own currency, we would not be allowed to re-join the EU.”

Speaking in the aftermath of the debate, SNP depute leader Keith Brown – who argued in favour of the motion’s unamended passage – commented: “Our party has a clear platform on which to campaign and win the case for independence.

“Scotland is a prosperous and successful nation, but we can do so much more by matching the success of other small advanced economies around the world.

“We don’t lack any of the talent or resources that they do, but we do lack the powers of a normal independent country which we need to grow our economy.

“Without these powers, we’ll always have one hand tied behind our back.

“Today’s vote marked a clear rejection of failed Westminster austerity, and a commitment by the SNP to sustaining Scotland’s finances through growth.

“But in our pursuit of prosperity, we must put our people first – wellbeing, fairness and tackling head-on the scourge of inequality.

“It is our ambition to move to a new currency – this is a significant and important policy choice. Until this can be achieved, safely and securely, our currency will remain the pound Sterling.” SNP depute leader Keith Brown

Brown continued: “Our party now sees the balance of advantage in a careful, managed and responsible transition to an independent currency.

“It is our ambition to move to a new currency – this is a significant and important policy choice. Until this can be achieved, safely and securely, our currency will remain the pound Sterling.

“Today’s was an informed, valuable and hopeful debate on our country’s future – a more stark contrast to the chaos and despair of Brexit it would be hard to imagine.

“This is a winning economic plan to take to the doorsteps – one which will achieve independence for Scotland.”

Speaking on behalf of the Common Weal think tank – which has strongly criticised the Growth Commission’s recommendations and opposed any period of ‘Sterlingization’ for an independent Scotland – Common Weal head of campaigns Jonathon Shafi told CommonSpace: “We are pleased to have made a contribution to this vital debate. This SNP leadership must now listen to members about real concerns in relation to the Growth Commission. This cannot be ignored.

“This SNP leadership must now listen to members about real concerns in relation to the Growth Commission. This cannot be ignored.” Common Weal head of campaigns Jonathon Shafi

“The six tests were soundly demolished during the debate. We want to move forward towards an independence that is both pragmatic and transformational. Common Weal will now be launching more research, papers and campaigns and will host a major festival of ideas later in the year.”

During the debate, the writer and former SNP MP George Kerevan moved an amendment which would eliminated the six tests and committed the Scottish Parliament to establishing a new currency within its first term post-independence, arguing that it would be a more compelling case in the next referendum campaign.

Sterlingisation “has a major, major time-bomb built into it,” Kerevan continued. “If we keep the pound just by ourselves, then there is no way a Scottish central bank can create the reserve currency that is needed in order to bail our any bank or any banking system in Scotland that gets into trouble.”

Public finance minister Kate Forbes MSP defended the motion in its unamended form, describing it as a “credible” and “hard-nosed” economic strategy for achieving independence.

Forbes said: “So conference, I have one question for all of today: do we want to talk about change or do we actually want to deliver change? Because this is just a debate unless we win independence.”