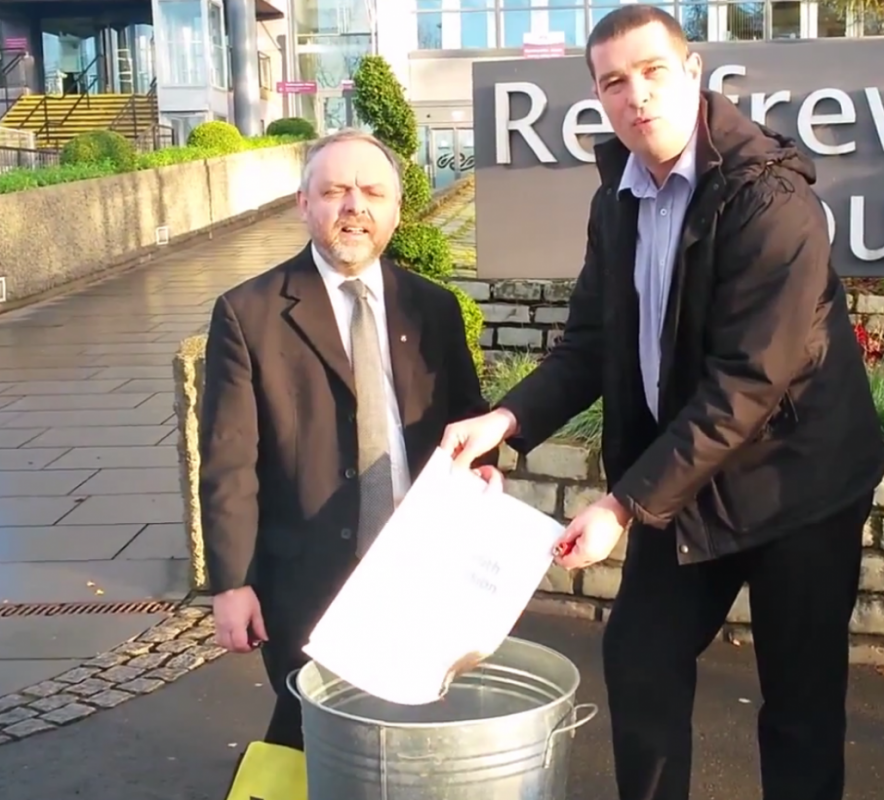 SNP councillors in Renfrewshire have been re-elected by their local branch to return to their previous positions in the party after being cleared of wrongdoing for a stunt in which they burnt a copy of the Smith Agreement in protest.

CommonSpace reported last month (click here to read more) that the Standards Commission had cleared the four councillors of wrongdoing, and the SNP confirmed that their suspension was then lifted from the party.

Now the local Renfrewshire branch has re-elected all four of the councillors to their previous positions at the party’s AGM: Brian Lawson as group leader, Kenny Maclaren as secretary, Mags Maclaren as treasurer and Will Mylet as press officer.

The stunt made national headlines as it was filmed and posted on YouTube. Councillor Mylet was heard saying: “This is exactly what we think of the Smith Commission report.

“No real powers for Scotland, yet again, from Westminster. We have been lied to again.”

The four councillors have continued to defend their actions.

Nicola Sturgeon said at the time that it was “not acceptable behaviour”.

The initial complaint was made by Renfrewshire Council’s Labour leader Mark Macmillan, who himself was found to be in breach of the Standards Commission Code of Conduct last year for – and speaking in favour of – giving a council contract to an organisation which employed him as a public policy advisor.

At the time, he said the incident was “an honest mistake”.

Responding to the decision of the local branch, an SNP spokesperson told The Herald: “Group office bearer positions are elected at the AGM each year, and Group members decided to re-elect those councillors to previously held positions. That’s entirely a matter for members of the Group.”

Douglas Alexander, the Labour MP for Paisley and Renfrewshire South, said people would be “shocked” by the councillors’ political revival in Renfrewshire.

“What kind of message does it send when the SNP promotes someone who takes part in these shameful stunts?” Alexander added.

In separate news, Alexander on Monday blamed social media and ‘conspiracy theories for the collapse of the Labour vote in Scotland (click here to read more).