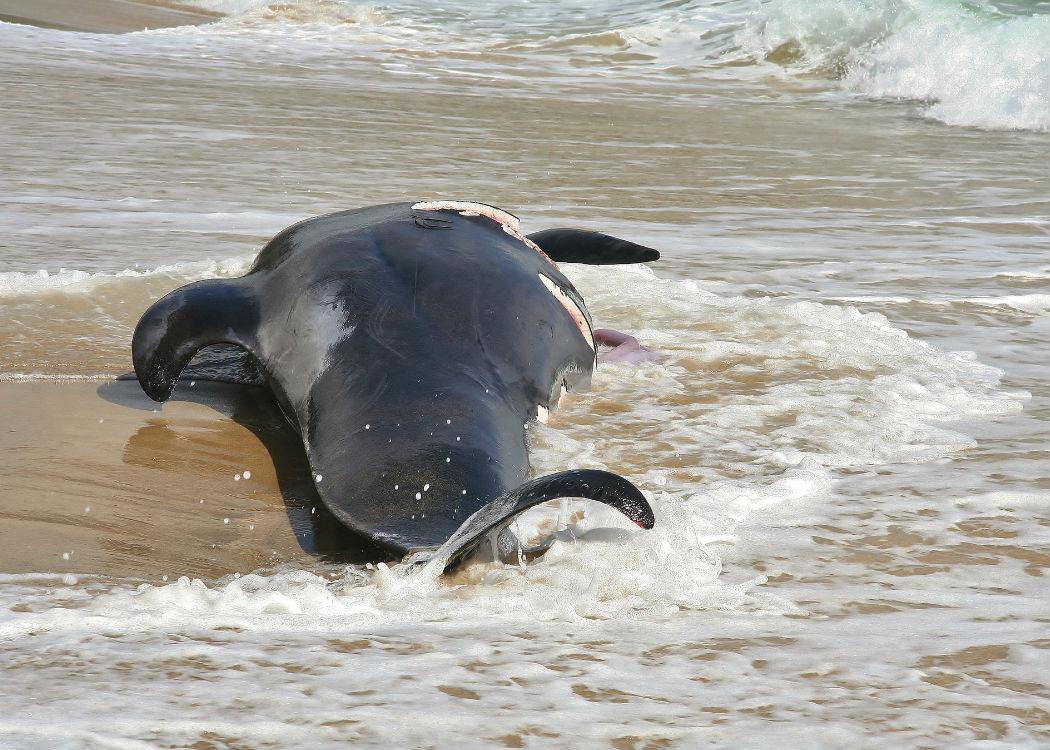 THE SNP has called on the Ministry of Defence to ensure that no more bombs will be exploded underwater in Scottish seas after a report confirmed that noise from underwater bombs was responsible for the death of 19 pilot whales in 2011.

The long-delayed report by the Department for Environment Food and Rural Affairs confirms that noise from the explosions could have damaged the hearing and navigational abilities of the whales which caused them to beach and die off the north-east coast of Scotland.

The deaths occurred after 70 pilot whales swam into the Kyle of Durness on July 22 2001, a tidal inlet east of Cape Wrath which is Europe’s largest live bombing range and the only European location where military aircraft can drop live 1000 lb bombs. In April this year, NATO carried out its latest set of ‘war games’ excercises there. (click here to read more).

Thirty-nine whales were left stranded by the tide and although concerted efforts by expert teams and the local community managed to refloat 20, the remaining 19 ended up dead, prompting the government-funded investigation by expert scientists.

“The fact that it took four years for this report to be published and for the UK government to accept that they are to blame is ridiculous.” Rob Gibson MSP

Rob Gibson SNP MSP for Caithness, Sutherland and Ross where the bombing took place, criticised the length of the time the report took to be published and urged the MoD to stop treating the area’s “wildlife and residents so appallingly”.

“This report confirms what we already suspected but the Ministry of Defence tried to cover up – the detonating of bombs led to the whales being deafened, forced off course and dying on the beach at Kyle of Durness,” he said.

“The fact that it took four years for this report to be published and for the UK government to accept that they are to blame is ridiculous.

“The efforts of the local people in the Kyle of Durness to save the beached whales were incredible – but sadly the animals could not be saved and many died.

“I am now writing to Michael Fallon calling on his commitment to ensure that the MoD cease exercises in this area and stop treating the wildlife and residents so appallingly.”

The scientists report found that three 1,000 lb bombs were detonated in the sea nearby in the 24 hours before the whales were stranded while a fourth 250-pound bomb was exploded after stranding began.

They were detonated by the Royal Navy’s Northern Diving Group after the bombs were left over from military exercises and required to be disposed of for safety reasons.

The report said that the Royal Navy’s visual checks for whales before bombs are exploded are “insufficient”.

According to the report the explosions were “plausible sources of significant disturbance to any neighbouring marine mammals” with the first three potentially having a “significant, detrimental effect on hearing and therefore navigational competence” while the fourth bomb “might have served to drive the animals further inland”.

The report said that the Royal Navy’s visual checks for whales before bombs are exploded are “insufficient” and said that it encouraged the use of devices which burn out rather than detonate bombs, adding that “it is questionable why this method has not been used routinely in the past”.

An MoD spokesman said he accepted the findings of the report. “It identified a number of possible factors that may have influenced events, one of which was the detonation of underwater explosives,” he said.