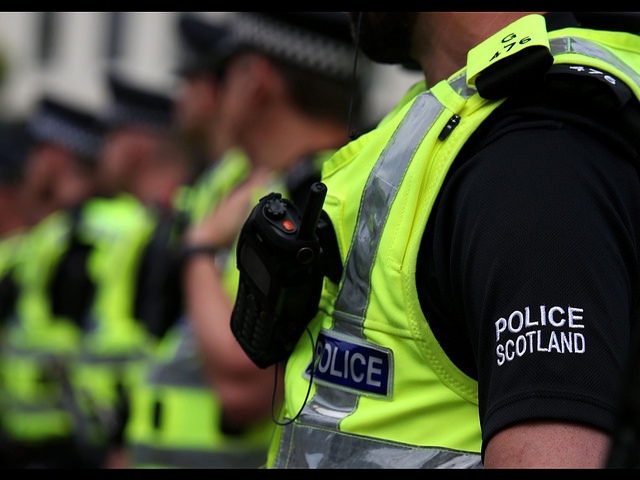 POLICE SCOTLAND AND THE SCOTTISH FIRE AND RESCUE SERVICE should be exempted from paying VAT by the UK Treasury, and be refunded the £140m they have paid in VAT since 2013, argued SNP MSP Ben MacPherson during a Scottish Parliament debate on Tuesday evening.

Prior to 2013, Scottish police and fire brigades were controlled by local authorities and funded through the Council Tax, and were thus exempted from VAT charges, but this arrangement came to an end when the services were merged into Police Scotland and the Scottish Fire and Rescue Service (SFRS).

“Police Scotland and the Scottish Fire and Rescue Service are the only territorial police and fire services in the whole UK that are unable to reclaim VAT.” SNP MSP Ben MacPherson

MacPherson, who wrote to Chancellor of the Exchequer Phillip Hammond asking for an exemption for Police Scotland and the SFRS on 12 October, arguing that current UK rules penalised the Scottish services, argued in the chamber: “Police Scotland and the Scottish Fire and Rescue Service are the only territorial police and fire services in the whole UK that are unable to reclaim VAT from the UK Treasury.

There were also numerous references made by speakers in the debate to a report in the Sunday Post newspaper on 8 October, alleging that Scotland’s 13 Conservative MPs had written to the Chancellor, urging him to end VAT charges on Police Scotland and the SFRS. Conservative MSPs present during the debate did not confirm or deny this.

“There is no justification for that discrepancy: it is totally unjust.” SNP MSP Ben MacPherson

“That anomaly needlessly costs our public services £35 million a year, which unfairly deprives Police Scotland of about £25 million and our Scottish Fire and Rescue Service of about £10 million. There is no justification for that discrepancy: it is totally unjust.”

MacPherson argued that, although the Scottish Government is protecting the police budget in real terms and has this year increased the fire service’s operational resource, “paying the VAT charges means that the UK Government is needlessly depriving Scotland’s police and fire services of extra resources” that could be used in front-line services.

Addressing prior arguments from critics that the Scottish Government was warned there would be VAT implications to the Police and Fire Reform Act (Scotland) 2012, MacPherson said: “The SNP never accepted or agreed with the position that our police services and fire services should be unfairly treated as a result of their mergers in 2013. There was no good reason to accept the glaring disparity then, and it should not be accepted now.

“The UK Government’s rules on VAT have needlessly disadvantaged communities across Scotland. They should, and must, be changed.”

MacPherson also maintained that there were no legal reasons why the UK Treasury’s current rules on VAT could not be changed, pointing out that the UK Government had amended VAT rules to allow academy schools to reclaim VAT via section 76 of the Finance Act 2011, that Highways England were granted a similar exemption through the Finance Act 2015, and that the BBC also typically enjoys an exemption.

Addressing another common criticism, MacPherson said: “Some people have erroneously tried to excuse the UK Government’s indefensible position by referring to European Union legislation on VAT. However, as the UK Government well knows, individual member states have latitude on how they implement the sixth VAT directive: how individual countries operate VAT refunds is principally down to national legislation.”

MacPherson called on the UK Government to use the forthcoming UK budget to end what he described as the “unfair disparity” for Police Scotland and the SFRS.

“Rather than indulging in whataboutery, Mr Macpherson needs to accept that his Government got this wrong.” Conservative MSP Murdo Fraser

In the first response of the debate, Conservative MSP for Mid-Scotland and Fife Murdo Fraser said: “The subject is a rather unusual one for a members’ business debate,” arguing that it was “hard to see” how MacPherson “or, indeed, any other member” had a specific constituency interest.

MacPherson responded that all constituency and regional MSPs had an interest in ensuring their police and fire services had the resources they required.

Fraser continued: “I appreciate that both Police Scotland and the Scottish Fire and Rescue Service would prefer it if the £35 million that they pay in VAT could be reclaimed. That is an issue for the Treasury, and I know that the chancellor and his colleagues are aware of it, but we should not be in any doubt that the SNP Government went into the reorganisations with its eyes fully open, and that it is living with the consequences of its actions.

“Rather than indulging in whataboutery, Mr Macpherson needs to accept that his Government got this wrong.”

Mary Fee, MSP for West Scotland and Scottish Labour’s deputy justice spokesperson, said in the chamber: “Labour backs the call for Police Scotland and the Scottish Fire and Rescue Service to be exempt from paying VAT, as they were prior to the creation of the single services.

“Nonetheless, the Scottish Government must also acknowledge that it was aware during the progress of the Police and Fire Reform (Scotland) Bill that VAT would apply.

“The bill passed without much progress being made on the issue and, five years on, we still have no solution. It is long overdue that a remedy be found, and one must be found soon.”

Fee backed MacPherson’s call for the UK Government to use the upcoming budget to rectify the situation.

Christine Grahame, SNP MSP for Midlothian South, Tweeddale and Lauderdale, made the next contribution to the debate, saying: “I asked to take part in the debate because I chaired the Justice Committee when it dealt with the bill that produced the national services and because I chaired the first Justice Sub-Committee on Policing, and I have pursued the issue of the VAT penalty ever since.

“There is only expediency for the favoured Tory policy of academy schools and punishment for Scotland for daring to do something different.” SNP MSP Christine Grahame

“It is true to say that, at the time of the abolition of the local services, the Government was warned of the consequences for VAT. Whether or not we agree with that, it is fair to say that warnings were given. That is as far as it goes.

“Let us put to one side the pre-existing Northern Ireland arrangements, under which its single forces are exempt from VAT. As with the £1 billion hand-out to secure the support of the Democratic Unionist Party’s support for Theresa May’s floundering Government, Northern Ireland is always treated differently—in some regards, for good reason.

“However, the UK Government was in a bit of a bind when it set about promoting academy schools in England as a favoured policy.

“Ironically, one of the driving forces—no pun intended—behind the amalgamation of the eight constabularies was Tory cuts.” SNP MSP Christine Grahame

“There is no principle in operation here; there is only expediency for the favoured Tory policy of academy schools and punishment for Scotland for daring to do something different and deliver national police and rescue services. What other explanation can there possibly be?

“Ironically, one of the driving forces—no pun intended—behind the amalgamation of the eight constabularies was Tory cuts and the unavoidable need to make efficiency savings by streamlining the services.”

At the time of publication, the UK Treasury has made no public response to the controversy, nor has it announced any plans to address the discrepancies noted by those speaking in support of MacPherson’s position.