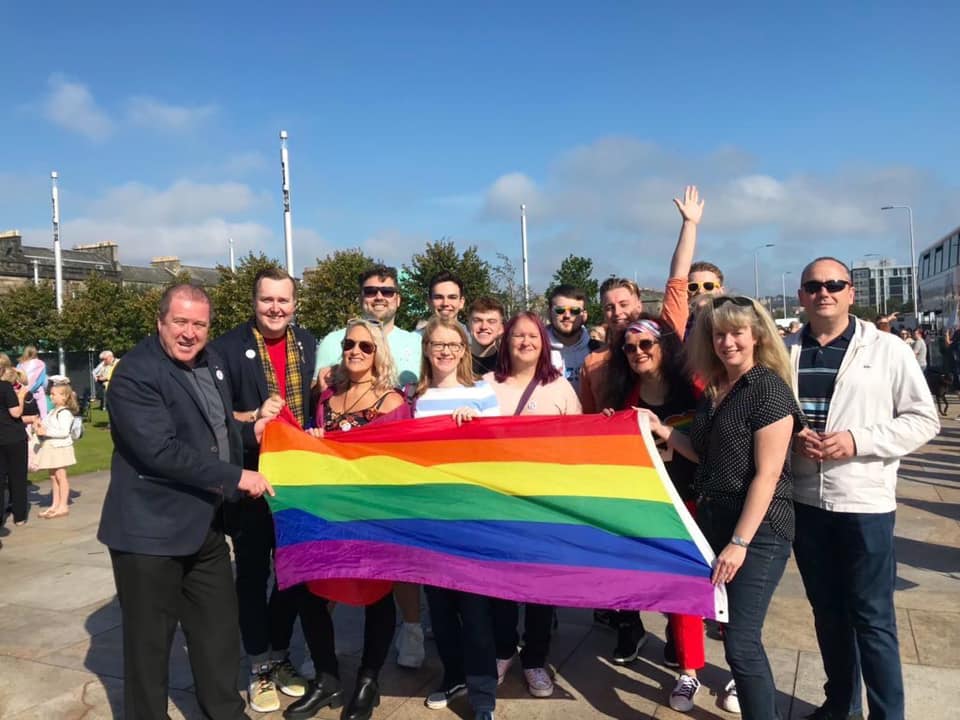 THE SNP leadership has been urged to take a stronger stand in the face of misinformation on trans rights, following a party conference fringe meeting of Out For Independence, the SNP’s LGBTQ+ wing.

Scottish Trans Alliance Manager James Morton today [15 October] asked panel members at the meeting to recognise that the conversation on trans rights cannot be limited to the proposed reforms to the Gender Recognition Act, as the current risks to trans people are much broader.

Following the event, Morton told CommonSpace he was concerned by what he regards as “confusion among many SNP members and politicians about the nature of some of the attacks on trans rights at the moment”.

While the panel discussion highlighted a range of issues impacting on LGBTQ+ people, a central theme was the debate around trans rights, which has gained considerable attention online and in the media in recent months.

At the meeting, Jenny Gilruth stressed that her feminism was not in conflict with trans rights and that “you can’t separate the L from the G from the B from the T”.

She added that she wished the discussion around the Gender Recognition Act reforms did not have to be described as a “debate” and said “we all have a responsibility to set the tone” of the conversation.

Speaking to CommonSpace, Gilruth said: “It’s not just about the party – while we are here at party conference, it’s about persuading the whole parliament.

“There are a lot of parliamentarians – not just in my group, but in other groups – who might have concerns. So it’s about working on a cross-party basis to move forward progressive legislation.”

Gilruth said that conversations were happening on the issue among elected representatives, some of them private, “where some people feel that’s a safe space to ask questions”.

She added: “I think that’s important. Ultimately that debate shouldn’t really be conducted online or in a way that could polarise the debate even more so. We have a duty and an obligation, I think, as an LGBT community more broadly to ensure that the debate is conducted in a respectful way to allow those conversations to take place.”

“We have a duty and an obligation, I think, as an LGBT community more broadly to ensure that the debate is conducted in a respectful way.” SNP MSP Jenny Gilruth

Despite the challenges of current debates, Gilruth said she had “optimism” that progress will happen. She said: “I spoke earlier about the fact that parliament has never passed legislation that’s not been progressive, that’s not improved the lives of people – we’ve never gone backwards.

“So I think we are going to get there, and I’m definitely hopeful for the future. But we need a law, not a bill, and that’s the important thing going forward.”

James Morton of Scottish Trans Alliance, however, said that there were were real and present risks of a “roll-back” on trans rights being brought through the Scottish Parliament within the year.

Currently, changes to census guidance are being considered which would ask trans people to select the sex on their birth certificate rather than the sex which reflects their lived experiences.

Morton said: “If they allow the census to roll back, that’s the first time that UK practice has gone backwards for LGBT people since Section 28.

“If we end up with a sex and gender data working group recommendation that rolls back trans people’s ability tor record their lived sex, that is a massive undermining of existing rights and will not be solved by whether or not we get Gender Recognition Act reform passed.

“That would be worse than the status quo. People need to be looking at the big picture.”

Morton said that he felt the discussion around data collection and the census would be used to usher in other pushbacks against the “the legitimacy of trans people’s lived sex”, including the right to change the sex on other official records and to access services.

“That’s why they want it: if it was just about the census they wouldn’t be fussed. That’s what worries trans people,” he added.

With this in mind, he said the Gender Recognition Act was not “the top concern of trans people at the moment”.

He said: “I would like to see more leadership from high up in the SNP about actually rebutting factual inaccuracies about the current status quo.

“I think they should be making very clear that the policies and practices that respect trans people’s rights didn’t just come out of nowhere – it’s a reflection of what the Equality Act and international human rights principles require.

“I think senior SNP people do need to stand up and state why current practice is the way it is.”

Newly elected women’s convener Rhiannon Spear told CommonSpace that while she feels that First Minister Nicola Sturgeon has been “unequivocal in her support” for trans rights, she was “personally disappointed to see non-binary provisions taken out” of the proposed reforms to the Gender Recognition Act.

Spear said: “I feel like we have capitulated a little bit to the fear that’s out there. In reality, being at conference and speaking to people, it’s not a conversation that’s being had within the mass membership. It’s a conversation within a very small minority within the party.

“I would say that overall the party is very, very supportive of trans rights and the Gender Recognition Act reform.”

The election of the new women’s convener role was considered by some to be a contest between conflicting views on trans rights, although five of the six candidates had made a point of signing an Out for Independence pledge supporting trans rights.

“I would say that overall the party is very, very supportive of trans rights and the Gender Recognition Act reform.” SNP women’s convener Rhiannon Spear

With Spear’s election announced this afternoon, alongside that of new equalities convener Fiona Robertson – also an outspoken advocate of trans rights – many within the party will see this as a positive reflection of the membership’s view on the issue.

Spear said that she feels that the conversation on trans rights could be moved forward by “taking it offline”.

She said: “It’s about meeting in person, having nuanced conversations with people. I do think there are genuine concerns out there and I’m not questioning that at all, but I think it’s about how we discuss those concerns.

“I think it’s every politician’s responsibility, no matter where you stand on this, not to fearmonger, not to put misinformation out there, and to focus on what we are trying to do.

“We get back to what the reform is actually about: we’re only talking about making it easier for trans people to change the gender on their birth certificate, that’s it. They can already change their passport and their driving license much more easily, this is the last hurdle and it’s very, very simple.”

Spear also suggested that, as a result of the debate, “people are becoming emboldened to challenge trans rights and identity”.

One of the points of that debate has been whether ‘sex’ in the Equality Act should be understood to include trans people. Spear said she was “worried” about the impact this could have for women’s rights.

She continued: “That anyone would be asking the current Tory Government to re-look at the Equality Act terrifies me, because we know what they’d do with it. They’ve spoken quite openly about scrapping the Human Rights Act – I think they would do the same with the Equality Act.

“There’s a lot of commitments in there around equal representation and equal pay which cost the government money and I think they’d be quite happy to see it gone.”

James Morton raised similar concerns about the discussion around the Equality Act, comparing this to the legal debate happening in the Supreme Court of the United States on whether discrimination based on someone’s lived identity falls under sex discrimination.

He said: “This harms not just trans people. Women have taken successful sex discrimination cases around gender stereotypes, around the way in which you are allowed to move and live in society as a woman and challenging those stereotypes.

“If you narrow the definition, would those cases still hold? I don’t want any case that’s about discrimination against a woman to fall because sex got drawn in such a narrow way that that fell outside it.”

Picture courtesy of Out for Independence