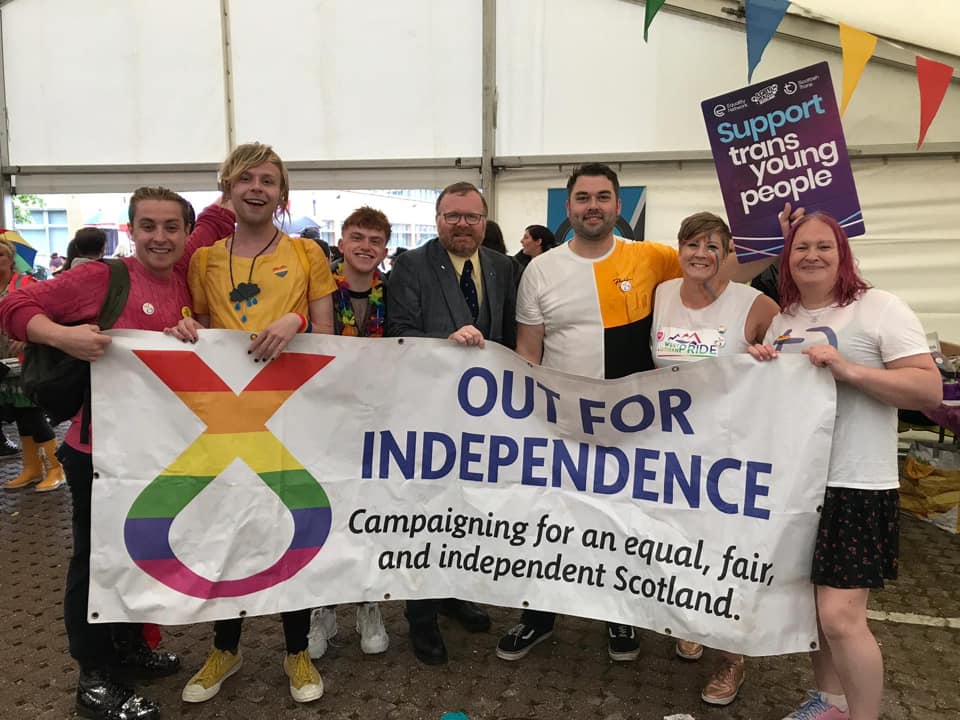 OUT FOR Independence, the SNP’s recently revived LGBTQ+ wing, has launched a campaign asking candidates for the party’s National Executive Committee (NEC) to sign a pledge in support of LGBTQ+ rights.

The NEC, which is made up of the party’s elected office bearers and six elected members, will be voted in at the party’s upcoming conference (13-15 October).

So far, at least 26 of the 100 candidates standing for roles on the committee have signed up to the pledge, while other members have signalled their intention to sign once the pledge is opened up after the conference.

The commitments outlined by the pledge are: “To promote and further equality for all. To protect the inalienable human right to be safe from discrimination based on sexual/romantic attraction and gender identity. To educate and empower, challenging my own assumptions, prejudice and bias.

“To engage with LGBTQIA+ members of the SNP, wherever policy has an impact over their lives. To embody the values of Out for Independence by becoming a role model and ally to the LGBTQIA+ community.” 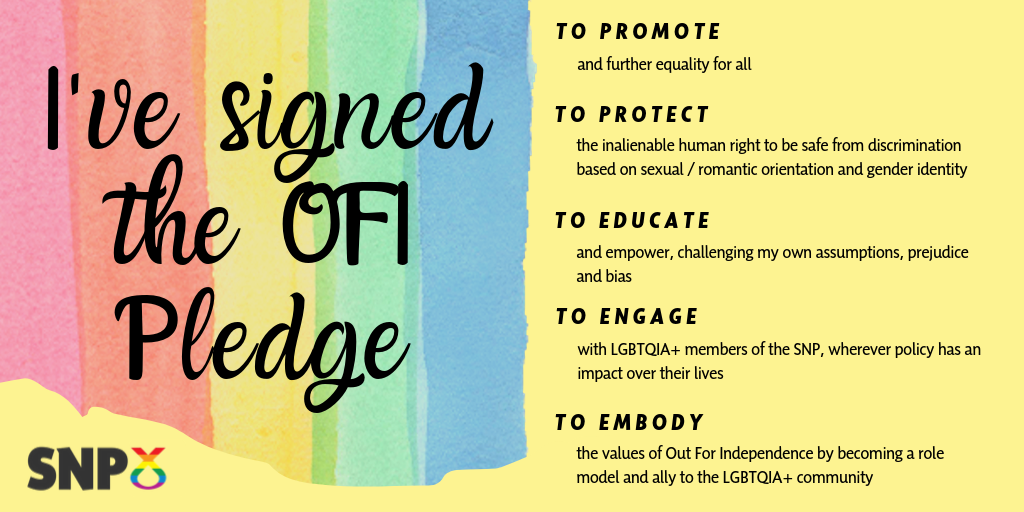 Co-convener of Out for Independence Josh Mennie (he/him) told CommonSpace: “The NEC and internal elections at party conference are incredibly important. Those elected will become senior and leading members of the SNP and with that comes responsibility and influence.

“That’s why we’re asking candidates at this year’s conference to support the #OFIpledge which supports true equality for all people who identify as LGBTQ+”.

Co-convener Emma Cuthbertson (she/her) added: “The Out For Independence pledge is a great way for candidates to signal ahead of the elections that they support the core beliefs and values of inclusivity and equality, as put forward by OFI, the SNP’s official LGBTQ+ wing”.

The pledge, and the reformation of the Out for Indepence group earlier this year, comes amid heightened debates within some sections of the SNP surrounding proposed legal and policy developments intended to strengthen trans rights.

READ MORE: What you need to know: Scotland’s women’s sector speaks out on gender recognition for trans people

In particular, tensions have arisen around the proposed reforms to the Gender Recognition Act, changes to national census questions, which would be more inclusive of trans people, and guidance for schools on how to support trans pupils.

While the Scottish Government has been largely supportive of these reforms, a number of SNP MPs, MSPs and councillors have publicly raised concerns over perceived clashes with women’s rights. LGBT organisations have called on the government to be more decisive in its support of trans rights and avoid delaying progress.

Vice-Convener of Out for Independence Finlay McFarlane (he/him) said: “We have been overwhelmed by the positive response to our pledge.

“Whilst attracting over 25% of the total candidates in the first few days of launching, we have also been inundated with everyone from ordinary SNP members right up to elected parliamentarians who aren’t even standing in October waving their support for our pledge.” 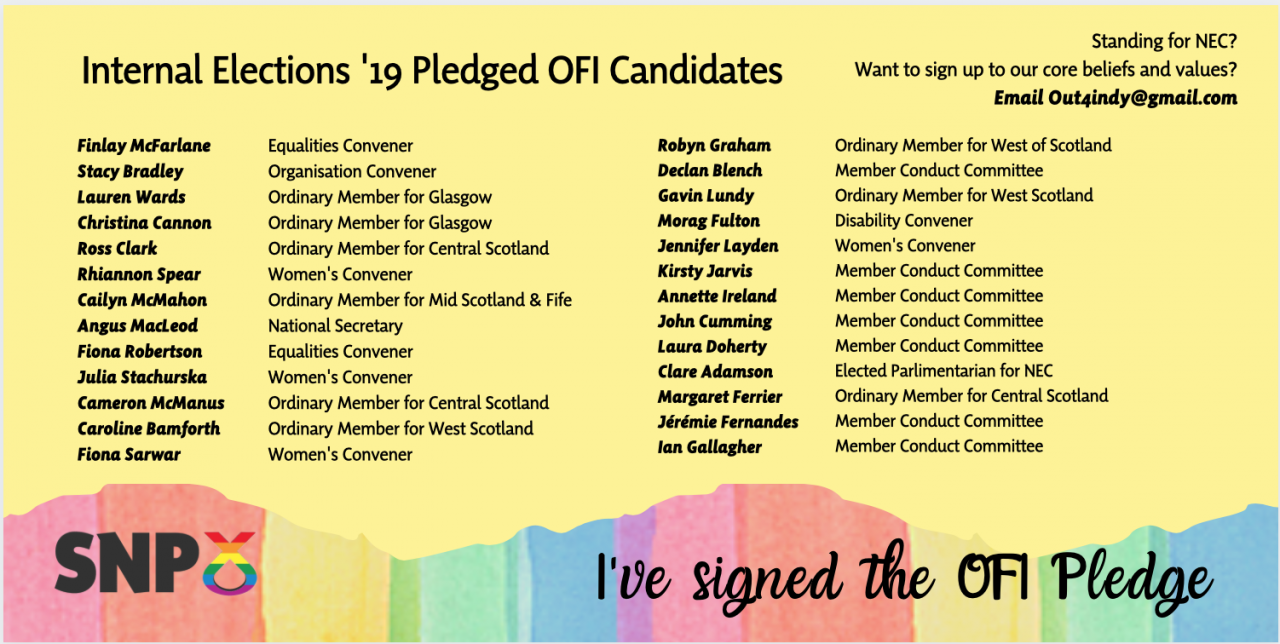 One MP who has spoken out in support of the pledge is SNP equalities spokesperson Angela Crawley. Speaking to CommonSpace, Crawley said: “I am proud of the SNP’s record on LGBTQIA+ rights.

“Since 2007, we have introduced world-leading equal marriage legislation and LGBT hate crime laws, passed the progressive Turing Law, opened adoption and IVF up to same-sex couples, became one of the first countries in the world to commit to LGBT-inclusive education, ended the lifetime ban on blood donation for gay and bisexual men and approved the provision of PrEP on the NHS to prevent HIV.

“Despite this fantastic work, we still have some way to go. Trans people face more prejudice than perhaps any other group in Scotland. Research by the Equality Network found that 91% of trans people had experienced discrimination in the past year. That is unacceptable and one reason that I am backing the Out For Independence pledge.

“Because until we accept trans people for who they are, there is no equality.”

Jordan Daly, co-founder of the TIE (Time for Inclusive Education) campaign, which played a key role in bringing about the Scottish Government’s decision to introduce LGBT inclusive education last year, told CommonSpace that he was pleased to see this initiative by Out for Independence.

Daly said: “This is a welcome move and we would encourage all political parties to take similar steps to guarantee that their elected representatives will support measures to advance policies related to equality and human rights.

“Some may think that we have achieved equality for LGBT people, but we know that this is not the case, and recently we have been reminded time and time again of this.

“We know that there are people in Scottish politics who do not support measures which will improve the lives of LGBT people. Incentives such as this pledge act to ensure that those seeking to advocate for diverse communities will stand up for equality, and be allies for the LGBT community, in all of their political activities.”

The results of the NEC election will be announced on 15 October, during the final day of the SNP conference.

Pictures courtesy of Out for Independence