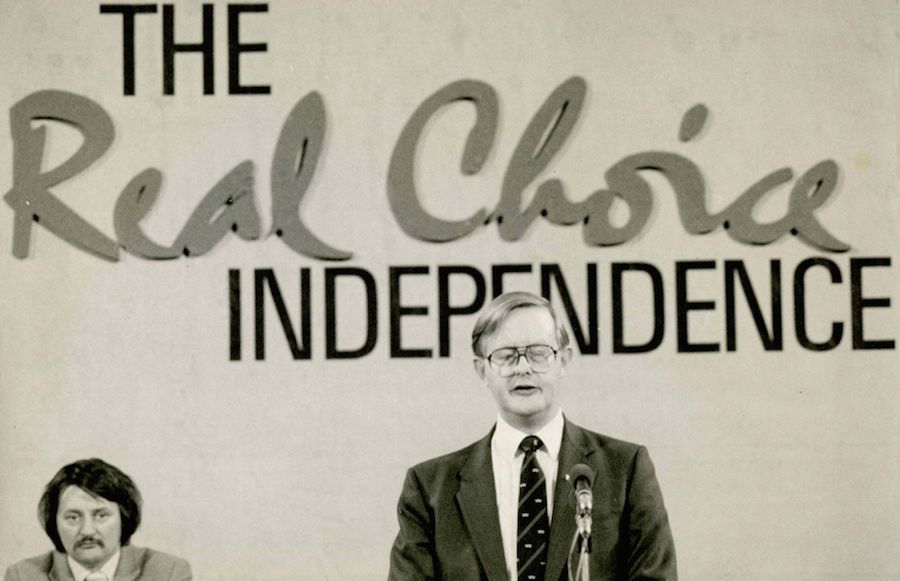 Gordon Wilson, SNP leader from 1979-90, passes away in hospital

GORDON WILSON, a key figure in the history and growth of the Scottish National Party, has died at the age of 79.

Wilson, an MP over 13 years and leader of the SNP for over a decade, was the party leader during the turbulent politics of the 1980s – which included the national movement against the Poll Tax and vast industrial growth from Scotland’s North Sea oil as well as the destruction of many of Scotland’s traditional industries.

Tributes have been paid to Wilson, who had continued to play a role in public debates on independence and the future of the party, from the senior figures in the SNP.

First Minister and SNP leader Nicola Sturgeon said: “Gordon Wilson’s contribution to the success of the modern SNP was immense and his loss will be keenly felt across our party. He was a fine and kind man, a loving husband, father and grandfather and a true patriot.

“From his early days promoting the case for independence on Radio Free Scotland to his 13 years of service as MP for Dundee East and 11 years as leader of the party Gordon was a passionate advocate for Scotland at every level.

“He was a fine and kind man, a loving husband, father and grandfather and a true patriot.” Nicola Sturgeon

“He was at the centre of many lively and passionate debates through the 1970s and 80s over how independence would be achieved and continued to play a part in the independence debate right though the referendum in 2014.

“Gordon was always forthright in his views and his commitment to seeing Scotland become an independent country was second to none. Even – perhaps especially – on those occasions when his views on tactics differed from mine, I always highly valued and appreciated his advice.

“My thoughts are with Edith and all of his family at this time. Gordon will be fondly remembered and sadly missed by all those who knew and worked with him in the SNP and across the country.”

Alex Salmond, who succeeded Gordon Wilson as leader in 1990, added: “Not only was Gordon one of the masterminds of the SNP parliamentary breakthrough of the 1970s but he led the party through tough times in the 1980s. Holding his Dundee seat in 1979 and 1983 was crucial in retaining the credibility which allowed the SNP to prosper in the 1990s and beyond. The party, the national movement and Scotland owe him a great debt and my condolences go to Edith and the family.”

Deputy First Minister and family friend of Wilson, John Swinney, said: “Gordon Wilson was a giant of the Scottish National Party. He was critical to the transformation of the SNP from the fringe to the mainstream of Scottish politics. His administrative, campaigning and political skills built the SNP into a nationwide political force. The strength of the SNP today is built on the courage and tenacity of fine people like Gordon Wilson.”

Gordon Wilson is survived by two daughters and five grandchildren.

Picture courtesy of the Scots Independent