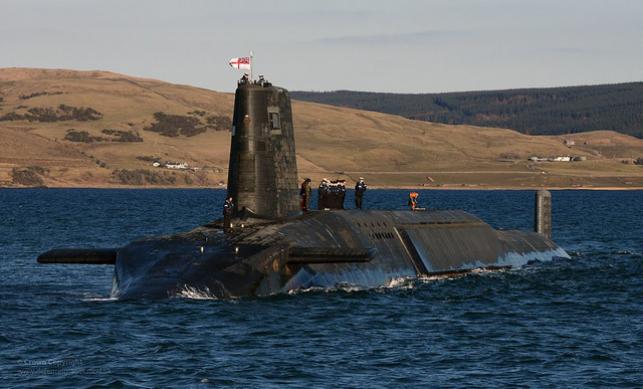 SCOTTISH CND have criticised the SNP for not challenging UK Government Minister Gavin Williamson’s plans for Trident renewal, in a major speech he made on the future of Defence spending today [11 February].

Williamson – who made the case for a post-Brexit Britain which was “the nation that people turn to when the world needs leadership”, advocating western intervention as and when necessary – said he had boosted spending plans for nuclear weapons since becoming Defence Minister in 2017.

He stated: “When I came into the Department the talk was about cutting capability. But instead, this Government has delivered an extra £1.8 billion of Defence funding, keeping us on track and prioritising the right UK Defence for the decade to come.

“That includes £600 million to protect the future of our nuclear deterrence. This ensures we will deliver the new submarines on time and means that we are spending £4 billion every year to ensure the ultimate guarantee of our safety for another 50 years.”

Responding to Williamson’s speech, SNP Defence spokesperson Stewart McDonald MP criticised the fact that Williamson ignored “mounting funding challenges” in the MoD and said the Minister was “channelling his inner Trump”, but did not challenge Williamson on his Trident remarks, instead stating that the party had “engaged constructively” on Defence plans.

“The SNP has continued to offer a constructive opposition to the Conservatives on Defence,” McDonald said. “We have engaged constructively on the Modernising Defence Programme in a bid to improve the UK’s defence posture in the High North, improve working conditions for members of the armed forces and suggested a more sustainable funding model – switching to multi-year defence agreements – in order to achieve this.”

Vice-chair of the Scottish Campaign for Nuclear Disarmament (CND), Isobel Lindsay, was critical of the SNP response, saying: “I am taken aback by the SNP’s official  response to the Tory Defence Secretary’s expenditure plans.  Not a single mention of the money committed to Trident and the extent to which that will dominate capital budgets for years to come as well as no critique of the delusions of imperial grandeur.  SNP members deserve better than this.”

The SNP’s opposition to the UK’s nuclear weapons arsenal, located at Faslane near Glasgow, has been longstanding, and it made scrapping Trident a key part of the 2014 independence referendum campaign.

Commenting on Williamson’s speech, Stop the War Coalition Convenor, Lindsey German, said: “Williamson is part of a government presiding over damaging austerity, but constantly argues for more military spending to increase these damaging interventions. His warmongering may have more to do with his political ambitions than the actual reality, but it is dangerous nonetheless and should be opposed.”

Andrew Smith of Campaign Against Arms Trade said: “With the UK at a crossroads, the Government should redefine its role, but that should mean an end to interventionism and the focus on projecting military strength around the world – not more of the same failed policies that have done so much damage.”