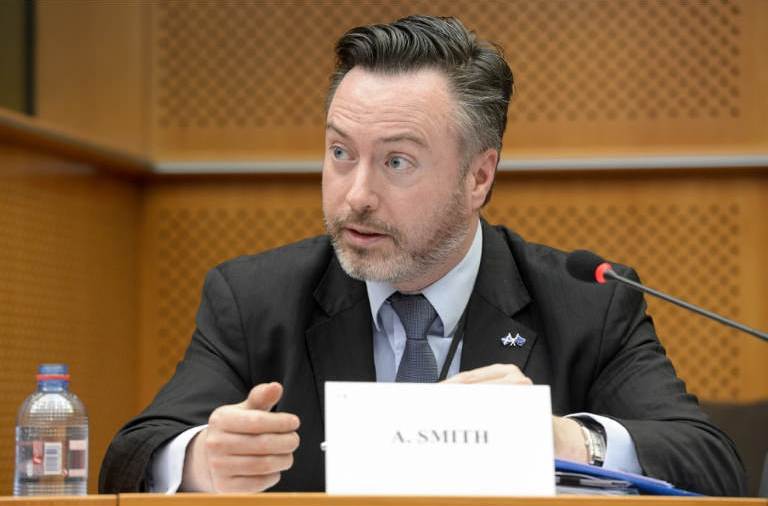 IN AN EVENT exploring Brexit, the Border and the Internal Market in Ireland on Thursday, SNP MEP Alyn Smith will argue that the UK Government is in breach of the Good Friday Agreement due its dependence on the DUP in parliament and the “constitutional vandalism” likely to be inflicted by Brexit.

The MEP will make his remarks as part of a debate with Neale Richmond, Irish Senator for Fine Gael.

Smith is expected to say: “The actions of the UK government in relying on the DUP for its very existence is to my mind a clear breach of the Good Friday Agreement before Brexit even starts.”

READ MORE: UK and Ireland face off over proposals for post-Brexit border

He will say: “The things the UK Ministers are promising – a frictionless border, but a UK out of single market and the Republic within – cannot co-exist in the real world.

“Schrödinger’s border is not a credible strategy and the people of this island, and indeed these islands, deserve better.

“The extent to which the Irish aspects of Brexit have not received any serious thought beyond a lamentable 28 pages of contradictory waffle is nothing short of a scandal which any responsible government with a shred of integrity would have resigned over long since.”

Smith will argue that there is a real risk that leaving the EU could undermine the peace process – a concern shared by many Irish Republicans. Smith is expected to suggest that Michel Barnier, European Chief Negotiator for Brexit and French Republican politician, has a better understanding of Northern Ireland than the UK Government due to his experience as a former peace commissioner.

Smith will add: “We of course have deep concerns over the fact that the devolution settlements in Scotland and Wales are being comprehensively ripped up, but the reality in Northern Ireland is sheer constitutional vandalism.

“The only logical outcomes to any Brexit scenario I can see are either de facto Dublin rule in the North and the border shifts to Stranraer, or a hard border the likes of which you’ve never seen across the Island of Ireland and the Peace Process ruinously undermined.”

The event, hosted by the Dublin City University Brexit Institute, will hear from leading academics, business leaders and policy-makers on the impacts of Brexit on the Republic of Ireland and Northern Ireland.