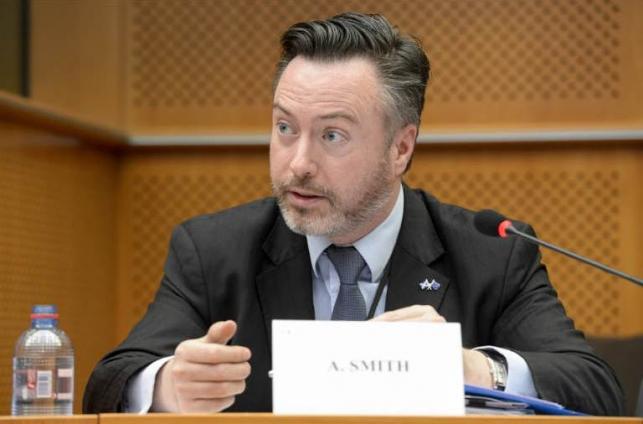 SNP MEP Alyn Smith has cautioned that a second EU referendum could drive “resentment” amongst Leave voters in England and boost support for the far-right.

Speaking to CommonSpace, the staunchly pro-EU MEP said he wasn’t convinced that calls for another EU referendum would resolve the issue and warned that there could be “dangerous” side effects.

Smith said: “I’m very open to [a second EU referendum] but it needs to be a thing coming from England, and there isn’t a huge desire to have it.

“If there’s a feeling in England that Brexit was stolen, there will be resentment, and that will go somewhere. It won’t go to the Tories, and it might go somewhere really bad.

“There is a real risk that this could put the rocket boosters under a new version of Ukip, and it won’t be Ukip, it’ll be Tommy Robinson.

“It would, in effect, be dangerous and it wouldn’t solve the question.”

English Defence League founder Tommy Robinson, currently in prison for contempt of court, has recieved the backing of Ukip leader Gerard Batten, who spoke at a rally in his honour last weekend and told Newsnight on Wednesday that Robinson would, in future, be seen as someone who was “on the right side of a struggle between good and evil”.

Smith added that the SNP could also face a “backlash” in Scotland if it was “seen to foist another referendum on England”.

The comments come in a week when the Scottish Government’s Brexit minister Mike Russell expressed perhaps the strongest support yet within the SNP for a second referendum, stating that another vote was “now essential” in light of revelations that Vote Leave broke electoral law by overspending by almost £500k.

Smith, however, said that he did not see “sufficient movement in the polls” to suggest a different outcome would be achieved from a repeat vote.

While campaigners around the UK, under the banner The People’s Vote and backed by the Liberal Democrats and the Green Party of England and Wales, have pushed for a vote on the final Brexit deal, Smith said there was, as yet, no such deal to vote on.

“If it’s proposed as a referendum on the terms of the deal – what deal? What terms? We know very little at the moment,” he said.

When the final details are known, Smith said the SNP had already backed a referendum for Scotland to decide its future relationship with Europe: an independence referendum.

“People seem to have forgotten that we are committed to a second referendum already – on independence. The only thing we don’t know is the timing, because we need to see the outcome of Brexit for people to make an informed decision in Scotland,” he said.

“In a nutshell, we already have an answer to the question on a second referendum.”

In March 2017 the Scottish Parliament voted in favour of holding a second referendum on independence, but the decision was put on hold following significant SNP losses in the snap General Election in June. As a result, First Minister Nicola Sturgeon said she would not set a date for an independence vote “until there is a greater clarity about the Brexit talks”.

Smith remains convinced that re-entry into the EU must continue to be the official position of the SNP in a second independence referendum. “If we are perceived on [seeking] independence as going soft on that question, we lose good will in Brussels, and we start to look a bit weird as the UK does just now,” he said.

“There is no question that Scotland’s interests are best served being in the EU, like Ireland and like Denmark.”

Shortly following the Brexit vote in 2016, Alyn Smith received a standing ovation in the European Parliament for a speech in which he said he was “proudly Scottish and proudly European” and called on his colleagues to respect Scotland’s 62 per cent Remain vote.

While Smith said he was happy to take arguments for other options, such as EFTA membership, “on their merits”, he didn’t think there was “a sizeable number of people in Scotland” who would oppose rejoining the EU.

He added: “It’s important we remember that Scotland voted in every constituency to Remain. Where we take on the arguments, we win.”

While polling indicates that over one third of SNP supporters voted to leave the EU, the official party position is that “the best way to build a more prosperous and equal Scotland is to be a full independent member of the EU”.

The Scottish Government released its own contribution to the UK Government’s Brexit White Paper earlier this month, of which the central focus was the need to remain a member of the Single Market and Customs Union.

An official statement from Mike Russell on the issue said: “In the absence of detailed and meaningful discussion with the UK Government, we now feel compelled to publish our own realistic and workable proposals for our future relationship with the European Union.

“We continue to make the case for continued membership of the European Single Market and the Customs Union as a compromise that respects the democratic decision of both Scotland and other parts of the UK.”