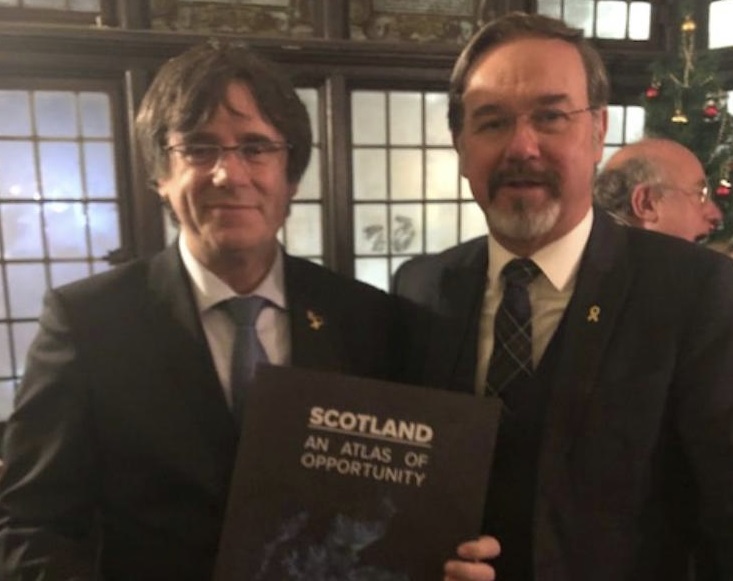 SNP MP Ronnie Cowan has called on Catalan political prisoners to be released from jail after meeting exiled former Catalan President Carles Puigdemont, and presenting him with a Scottish Atlas.

The MP, who is vice-chair of the all-party parliamentary group on Catalonia, met Puigdemont in London as four of the nine Catalan political prisoners remained on hunger strike, which was announced on 1 December.

Cowan presented Puigdemont with a recently published ‘Atlas of Opportunity’ produced by the Common Weal think tank and graphic design organisation Lateral North, which have co-produced the first detailed new maps of Scotland for over a century aiming to show the country’s geo-economic potential.

Speaking to CommonSpace following the meeting, Cowan said: “It was a pleasure to meet President Carles Puigdemont in London recently. He spoke at an event in the Frontline club before taking part in a robust question and answer session.

“Both sides of the Catalonia independence debate were represented. I took the opportunity to present him with a copy of ‘Scotland: An Atlas of Opportunity’ and I now have to purchase more for his staff as it was so popular.

“But my main purpose was to catch up with him and his consular staff regarding the imprisonment of seven politicians and two cultural activists as a result of their involvement in last year’s referendum in Catalonia.

“Four prisoners are on hunger strike and have been joined by The mayor of Montblanc. The prisoners are expecting to be tried in January and are resigned to being found guilty. They all face imprisonment of up to sixteen years.

“This is an unacceptable situation in any democratic country. The prisoners’ human rights and free speech are being impinged upon and Spain should move swiftly to reassess the situation and free the prisoners.”

The former Catalan President fled to Brussels after the Spanish Government implemented article 155 in October last year, taking over direct rule of the territory and dissolving the Catalan Government. The move came in response to Puigdemont announcing Catalan independence following a vote for independence in a disputed referendum on 1 October, which saw violence from the Spanish police at polling booths.

Puigdemont remains unable to return to Catalonia without facing immediate arrest by Spanish authorities, despite the removal of the Partido Popular (PP) President Mariano Rajoy in June thi syear.

His replacement, PSOE’s Pedro Sanchez, has sought less hostile relations with the Catalan Government, led by pro-independence President Quim Torra, moving the political prisoners closer to their homes, but has been unwilling to call on the Spanish judiciary to stop the trials or to remove arrest warrants for exiled Catalan leaders.

CommonSpace reported earlier this month that some 40 MEPs belonging to the EU-Catalonia dialogue platform had called on the prisoners to be released, and showed their support with a new manifesto, published as Catalan parliament speaker Roger Torrent visits Brussels.

The manifesto expresses their “solidarity to support the Catalan political prisoners for their struggle for freedom and the defense of human rights and shows its solidarity and its total admiration towards this peaceful act of protest.”

The imprisonment of the Catalan activists and politicians has also been condemned by the International Association of Democratic Lawyers (IADL), which has called for the prisoners’ immediate release and for the arrest warrants issued against Catalan politicians currently in exile to be withdrawn.