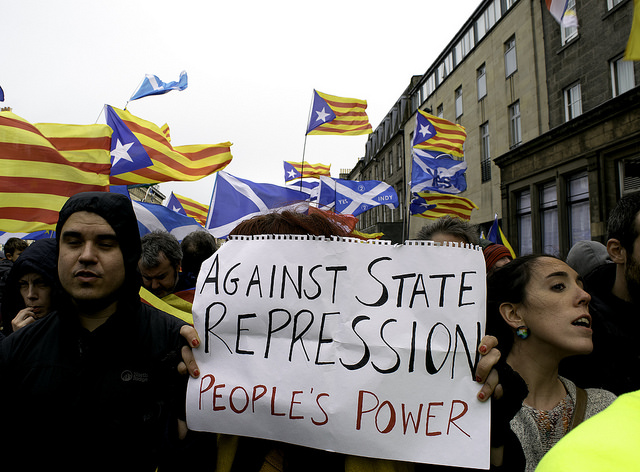 Douglas Chapman was in Barcelona to observe the independence referendum

DOUGLAS CHAPMAN, the SNP MP for Dunfermline and West Fife and a member of the All Party Parliamentary Group of Catalonia, has endorsed claims by the Catalan Government that it has won its right to statehood following its landslide victory in Sunday’s independence referendum.

The 1 October referendum produced a 90 per cent vote for independence among the 2.3 million eligible Catalan voters, despite widespread and violent attempts at suppression by Spanish authorities, who seized numerous ballot boxes and employed riot control tactics, batons and rubber bullets again unarmed civilians.

“It’s now a matter for the Catalan Government to move forward from this result and take whatever steps necessary.” SNP MP Douglas Chapman

When asked if he agreed with claims by the Catalan Government that Catalonia had won its right to statehood, Chapman responded: “Absolutely.

“It’s now a matter for the Catalan Government to move forward from this result and take whatever steps necessary to ensure Catalan statehood.”

When asked if that included a unilateral declaration for independence from Spain regardless of the Spanish Government’s position, Chapman answered: “Again, that is a matter for the Catalan Government, but I understand that is an option that is being considered.”

Chapman, who travelled to Barcelona along with SNP MP Joanna Cherry QC as part of a 17-nation, cross-party delegation of observers, told Channel 4 News prior to the vote that they were there to ensure there was “no undue intimidation” at polling stations.

However, he said that members of his team had witnessed acts of violence by the Spanish authorities, and that the actions of a heavy police presence at the polling stations they visited had left children and elderly voters “distraught”.

“Given the amount of pressure Boris Johnson seems to be under, it’s not really surprising that he doesn’t want to get any more involved.” SNP MP Douglas Chapman

Asked if he had any reaction to the response from UK Foreign Secretary Boris Johnson, who has refused to condemn the violence of the Spanish authorities and urged sensitivity to “constitutional proprieties”, Chapman responded: “I think, given the amount of pressure Boris Johnson seems to be under, it’s not really surprising that he doesn’t want to get any more involved.

“I think the really disappointing response has been from the European Commission.”

The European Commission (EC) has also refused to condemn the actions of the Spanish state, saying in a statement released following Sunday’s events: “Under the Spanish Constitution, yesterday’s vote in Catalonia was not legal.

“For the European Commission, as President Juncker has reiterated repeatedly, this is an internal matter for Spain that has to be dealt with in line with the constitutional order of Spain.

“We call on all relevant players to now move very swiftly from confrontation to dialogue. Violence can never be an instrument in politics. We trust the leadership of Prime Minister Mariano Rajoy to manage this difficult process in full respect of the Spanish Constitution and of the fundamental rights of citizens enshrined therein.”

Regarding further demonstrations of solidarity and support for Catalonia, Chapman said that “there are a number of avenues we can pursue.” Based on his experience, however, “what was clear when we were over there is that Scotland has built up a lot of goodwill in Catalonia.”

When asked if the SNP will be modifying its policy on Catalonia following the referendum result, Chapman said: “That’s a matter for the party. Our October conference is coming up and I’m sure there are members who’ll wish to discuss it.”