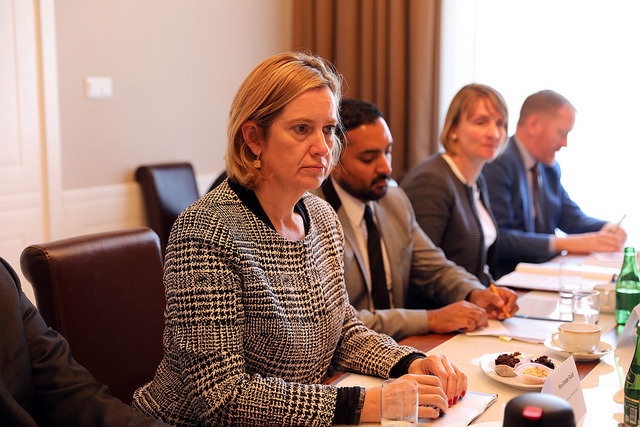 HOME SECRETARY Amber Rudd has faced hard questions and calls to resign after an official inspection report directly contradicted her claims – made on Wednesday in parliament – that the government had not used deportation targets.

SNP MP Alison Thewliss questioned the home secretary in a session of Urgent Questions on the issue on Thursday morning, where she demanded transparency on when targets were introduced, who signed them off, and whether they were in place in Scotland.

Speaking to a Commons committee on Wednesday, Rudd insisted that, while she had called for more deportations in a general sense, “we don’t have targets for removals”.

She added: “If you are asking me if there are numbers of people we expect to be removed, that’s not how we operate.” The director of borders and immigration for the Home Office, Glyn Williams, agreed with Rudd.

However, a 2015 inspection report by the independent chief inspector of borders and immigration has revealed that targets were in place to achieve 12,000 ‘voluntary departures’ of people without the legal right to remain in the UK. This marked a 60 per cent increase on the previous year, in which, the document showed, the target was 7,200 voluntary departures.

Lucy Moreton, general secretary of the Immigration Service Union, told the committee that staff had faced “increasing pressure” to meet monthly targets, and that posters highlighting the targets were displayed in Home Office offices.

Rudd was forced to return to the House of Commons on Thursday morning to face questions from MPs, who argued she had misled the committee. There, Rudd conceded that there had been local targets for “internal performance management”, but maintained that these were “not published targets against which performance was assessed”.

She admitted that she “had not been aware of the targets” and added that she had now asked for more information from officials to ensure targets were not being “used inappropriately”.

Glasgow Central MP Alison Thewliss said to the home secretary that the revelation that the targets exist came as “no surprise to me or the hundreds of constituents who have come to my surgery over the past three years”.

She said: “There is a litany of callous incompetence in his department and it is a problem of deliberate policy. [The] cruel hostile environment policy by the former home secretary, now prime minister, and continued unabated by the current home secretary.

“This home secretary is presiding over a department out of control, marked by cruelty and chaos. Will she stop shielding the prime minister? Will she do the honourable thing and resign?”

She added: “If it’s true that posters were displayed to remind staff of these targets, how is it possible that the home secretary and the director general of borders, immigration, and citizenship were not fully aware of this?”

Rudd did not answer these questions, but defended the home office’s policy, saying: “Once again the honourable lady is confusing the difference between legal and illegal migrants and I do not think she like any other member of this house would want the UK to be a home for illegal migrants.”

Last week, it emerged through leaked documents that Amber Rudd had vowed in a memo to Prime Minister Theresa May to increase the number of people being deported by 10 per cent “over the next few years”, a revelation seen to undermine her apologetic stance throughout the Windrush scandal.

The home secretary was also harshly criticised by MPs on Thursday for her apparent lack of knowledge about her department’s operation. Labour MP David Lammy said: “I asked the minister at the last urgent question how many people had been deported. She said she didn’t know.

“I asked her how many had been imprisoned in our own country. She said she didn’t know. There are impact statements from MPs, there are letters from MPs, and she said she wasn’t aware of a pattern.

“We now understand that people have been removed because of targets and she says she didn’t know. I say with all conscience: is she really the right person to lead this office of state?”