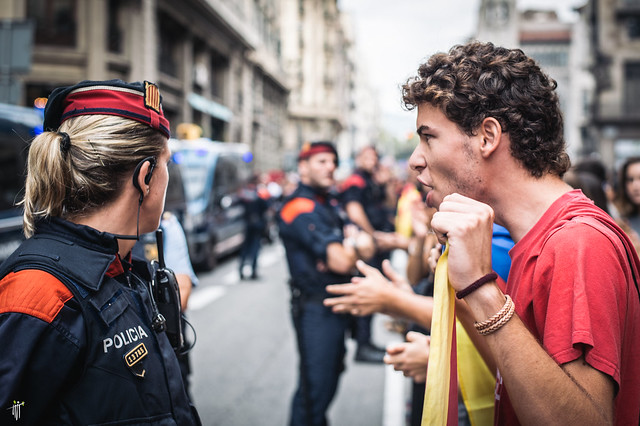 Marian Fellows MP: “The UK Government is so desperate, it is allowing democracy in Catalonia to be trampled and even denying the existence of political prisoners to gain Spain’s support in Brexit negotiations”

AN SNP MP has questioned whether the UK Government’s stance on the dispute between Spain and Catalonia is driven by the UK’s need to secure Spanish support in Brexit negotiations.

Speaking at Foreign Office questions on Tuesday, Marion Fellows MP asked: “Is it the case that the UK Government isn’t seeking to uphold self-determination for Catalonia because it needs Spain’s support in Brexit negotiations?”

Responding, Foreign Office Minister, Alan Duncan, said “We uphold [the Rule of Law] here with Scotland, with Spain on Catalonia. Certain accusations that somehow they have political prisoners are absurd.”

The exchange comes as the trial of 12 Catalan pro-independence leaders reached day 25, with two heads of the Spanish police during the 2017 Catalan independence referendum, which was violently suppressed by the Madrid government, giving evidence.

The charges of sedition and rebellion mean they could face up to 25 years in prison.

Amensty International and the United Nations High Commissioner for Human Rights have both criticised the pre-detention of the former Catalan ministers and civic leaders, while the International Association of Democratic Lawyers has called for the release of “the political prisoners”.

Commenting on her exchange with Duncan, Fellows said: “The UK Government is so desperate, it is allowing democracy in Catalonia to be trampled and even denying the existence of political prisoners to gain Spain’s support in Brexit negotiations. Far from being the major global player Brexiteers imagined, the UK is becoming an irrelevance on the world stage.

“It is everyone’s responsibility to uphold human rights. Denying the existence of political prisoners is detached from reality.

“In Catalonia, as in Scotland, the people are sovereign and the people alone possess the right to determine their futures. Catalonia voted for a Parliament that voted to hold a referendum. Madrid and the rest of Europe cannot continue to ignore democracy and should intervene to uphold democracy.

“There are numerous examples of the UK government defending human rights elsewhere around the world. The answer that it is an internal matter for Spain is simply not good enough and shows just how cowardly they are.”

In response to questioning about the Catalan case in January from SNP MP Ronnie Cowan, Duncan said that it was “not in its mission” to interfere in other country’s internal affairs.

Cowan said that “the UK government is looking the other way while Spain locks up political prisoners”.

On Monday, British Conservative MEP Claude Moraes accused Spain of “dirty tricks” after he was forced out of his role of rapporteur for EU no-deal visa-free travel legislation, following a dispute over the description of British controlled Gibraltar, which Spain has said should be described as “a colony of the British crown” in legislation. The UK Government agreed to last-minute changes to the Withdrawal Agreement during negotiations with the EU after demands from Spain over Gibraltar’s future status. It is anticipated that it will be a sensitive issue during the second phase of negotiations over the UK’s post-EU trading relationship with the EU, which is yet to begin.

Some of the jailed Catalan leaders are set to stand in Spanish elections on 27 April, of which the future of Catalonia is set to be a key issue.

The surge of far-right Vox, which advocates the dissolution of the autonomous communities in Spain to be replaced by permanent direct rule from Madrid, in recent local elections in Andalusia has seen a right-wing coalition emerge of Vox, Ciudadanos and the People’s Party which has unseated the centre-left PSOE for the first time in 40 years, and there are fears that a similar coalition could come to fruition after the April elections.

PSOE leader and prime minister Pedro Sanchez has sought to steer a softer line on the Catalan issue than his PP predecessor, Mariano Rajoy, but has not opposed the trials or promised Catalonia the right to hold a legally binding referendum on independence in the future.

Sanchez told a Catalan newspaper on Monday that he’d be prepared to countenance direct rule again in Catalonia if there was any new independence declaration from the Catalan government.

“Both the independence movement and the right [wing parties] know that independence will not happen,” he said.