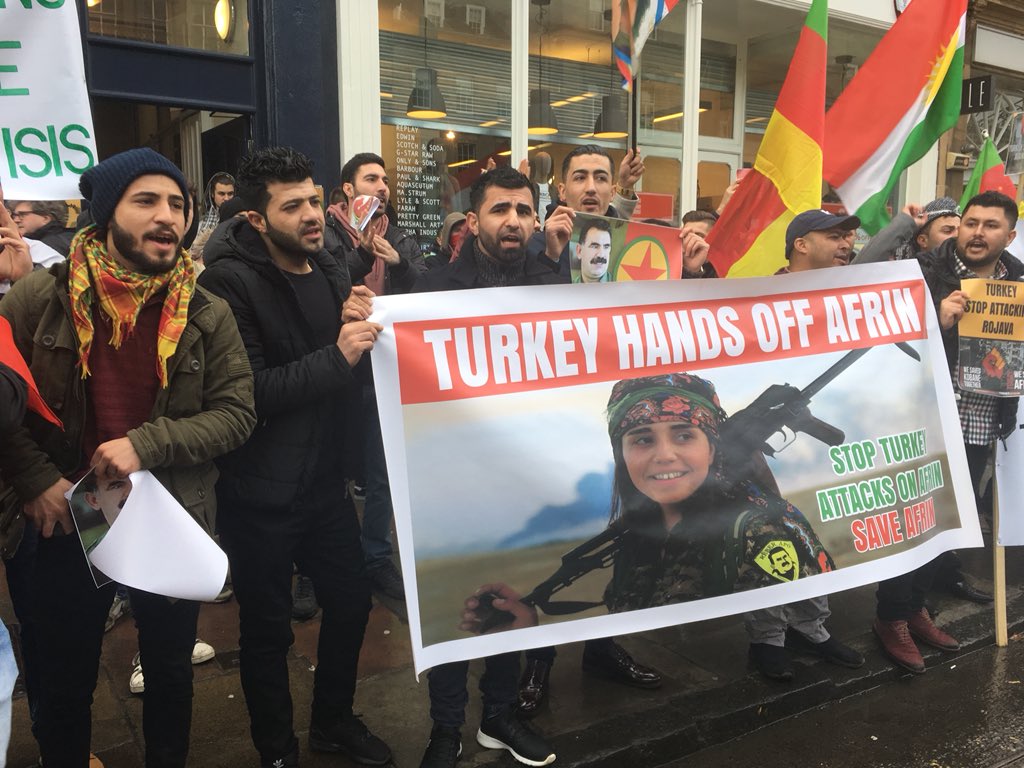 AMID TURKISH airstrikes and ground attacks in Northern Syria with the aim of removing the Kurdish YPG (People’s Protection Units), SNP MP Chris Stephens wrote to Foreign Secretary Boris Johnson on Wednesday, urging him to take action to end the violence.

The MP for Glasgow South West has also put forward an Early Day Motion in parliament calling for solidarity with the people of Afrin and condemnation of Turkish violence, sponsored by SNP MP Tommy Sheppard and Labour MPs Grahame Morris and Chris Williamson.

Turkey initiated a military attack against Afrin on 20 January of this year with the stated intention of eliminating terrorism in the region in the form of the Kurdish YPG, a claim which has been disputed by campaigners for Kurdish rights within the UK, and now by MPs speaking on their behalf.

Afrin in Syria shares a border with Turkey, where the Turkish state has been engaged in armed conflict with the Kurdish militia, the PKK, for decades, and where its treatment of the Kurdish population has led to numerous international rulings of human rights abuses.

Writing to Boris Johnson, Stephens said that Turkey’s aggression in Northern Syria was “horrific and needs to be condemned by the UK Government”. 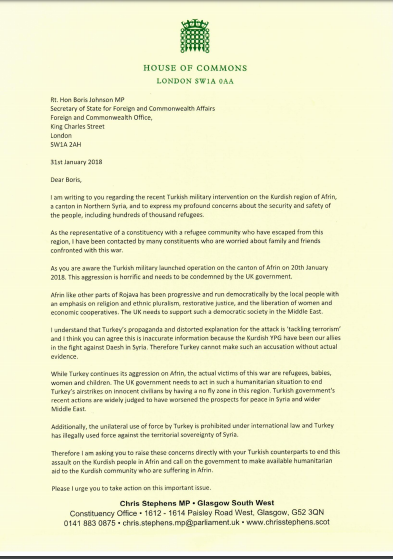 Specifically, Stephens has asked Johnson to raise these concerns with his Turkish counterparts and to call on the UK Government to make humanitarian aid available to the people of Afrin.

He explained: “As the representative of a constituency with a refugee community who have escaped from this region, I have been contacted by many constituents who are worried about family and friends confronted with this war.

“Afrin like other parts of Rojava has been progressive and run democratically by the local people with an emphasis on religious and ethnic pluralism, restorative justice, and the liberation of women and economic cooperatives.

“The UK needs to support such a democratic society in the Middle East.”

Stephens rejected the Turkish Government’s claim that the YPG are linked to terrorism, noting that the organisation has been an ally to UK in the fight against ISIS.

“While Turkey continues its aggression on Afrin, the real victims of this war are refugees, babies, women and children,” he said, adding that Turkey’s actions were likely to have worsened the prospects for peace in the region.

Liberal Democrat MP for Edinburgh West Christine Jardine also introduced an Early Day Motion on Tuesday calling for an acknowledgement of “the work of Kurdish Progress in providing a forum for discussing political, economic and social developments of Kurdish people in the UK and the wider Kurdistan region” and calling on the UK Government to help integrate Kurdish refugees into society.

A motion has been introduced in the Scottish Parliament by Scottish Green MSP Ross Greer objecting to Turkey’s violence and calling on the UK and United States’ Governments “to make clear their objections to this invasion and cease all arms sales to Turkey”.

Protests against the violence in Afrin organised by Scottish Solidarity with Kurdistan took place on Tuesday, Friday and Saturday of last week in Edinburgh, Glasgow and Dundee.